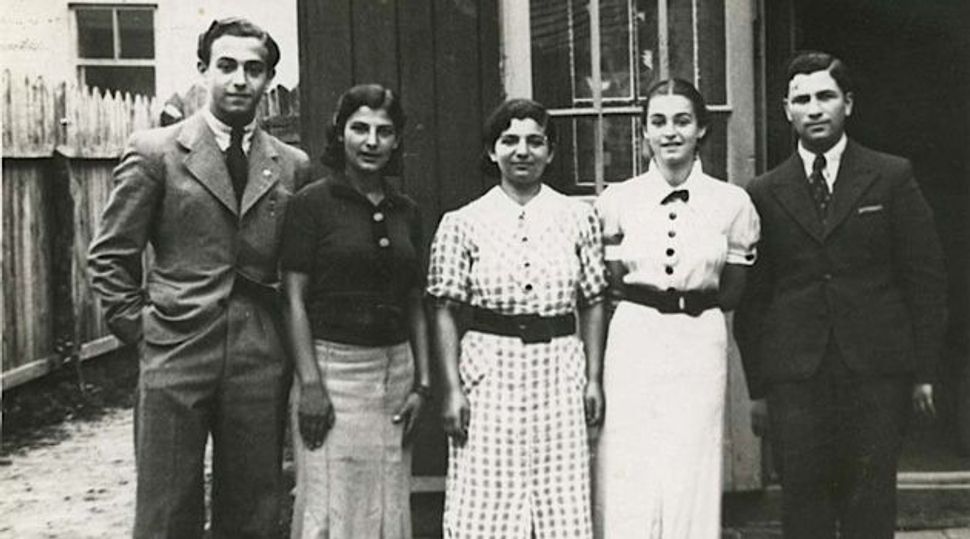 In a typical happy-ever-after story, a carefree dance with a stranger in the park could theoretically lead to true love and a joyous life. But for Max Heller, a Jewish Austrian man born in 1919, dancing with an American woman in Vienna’s Stadtpark ultimately led him to become the mayor of South Carolina’s sixth largest city.

Heller, who was elected mayor of Greenville, South Carolina, in 1971, dedicated the bulk of his life to his community and public service. But when he lived in Austria prior to World War II, he was still in school and made a living working in textiles. “[Heller] did not have political aspirations” before he arrived in the United States, his daughter Francie Heller told the Forward.

In 1937, Max Heller met five young women from Greenville at an outdoor cafe in Vienna, and asked one of them to dance. After Hitler’s invasion of Austria, Heller remembered that the woman, Mary Mills, had given him her address. Heller bought a German-English dictionary, wrote Mills a letter explaining his situation, and soon after, Shepard Saltzman, a Greenville man who worked in the shirt business, sponsored his escape from Vienna to South Carolina.

The letters from his correspondence with Mills can be found at the Museum of Jewish Heritage in New York City.

Heller, in his initial letter, reminded Mills of their interaction in Vienna. “Now I have a great beg to you!” he wrote. “I please you from heart if you can write me, that you will help me.”

“You probably think that I have forgotten you,” Mills responded. “But I have been trying to work out something for you. Now, I have good news.” She proceeded to tell him about Saltzman, who then wrote letters to Heller as progress with his case was made.

Although he built his life around American and Jewish communal life, Heller had not wanted to live in the U.S. previously. “It was purely circumstantial,” his daughter said.

Heller founded the Maxon Shirt Company in South Carolina, then sold the company ten years later and shifted to politics. As a city councilman, he devoted his time to improving subpar, shoddy housing and ensuring affordable housing for all. As mayor, he fought to afford workers equal opportunities, especially public servicemen such as firefighters and police officers, for whom he secured pension funds. Russell Stall, a Greenville local and nonprofit executive director, recalled interviewing Heller for a high school journalism class. After the 15-minute interview, the mayor took Stall on a walk down Main Street to show him his plans for Greenville.

“Everyone was the most important person in the world to him. He made me feel that way as a 16-year-old,” Stall recalled.

As textile and other manufacturing industries in Greenville fell into a slump, Mayor Heller tried to revitalize the city. In the 1960s and ’70s, the textile industry, which always thrived on cheap labor, began to wane as manufacturing moved offshore. Heller travelled extensively, visiting companies that he hoped would do business in Greenville. He also transformed Main Street from a four-lane thoroughfare into a two-lane street lined with trees, where people could walk on its expanded sidewalks.

After his mayorship, Heller became chair of the South Carolina State Development Board, helping to create 65,000 jobs. With the assistance of Governor Richard Riley, Heller brought such industries to the state as Michelin North America. According to Heller’s longtime friend Erwin Maddrey — a textile manufacturer who headed Riegel Textile Corporation and subsequently Delta Woodside Industries until 2000 — Heller also brought BMW to South Carolina.

In addition to advocating for workers’ rights, Heller successfully campaigned for civil rights. His daughter recalls that when he became mayor, the country club and other social clubs in Greenville offered Heller honorary memberships, even though they did not typically allow Jews in. But he would not join unless they opened the clubs up to other Jews as well as blacks.

In 1979, after his mayoral term ended, Heller ran for Congress against Republican Carroll Campbell. Stall, who was Heller’s youth coordinator for that election, said that the race was “ugly” and “awful,” and that anti-Semitism was pervasive. According to Anderson, Campbell ran a preference poll in South Carolina’s Independent Mail newspaper that asked people to choose between Campbell, a “native South Carolinian,” and Heller, a “Jewish immigrant.”

“Max was such a genuine, loving, caring man, so the experience was painful for him,” said Stall, who is now the executive director of Greenville Forward, a nonprofit organization that facilitates community change and progress.

Throughout his life, Heller — who died in 2011 at the age of 92 — always gave one-third of his income to charity, including numerous Jewish charities.

“He always wanted to give back, because America gave him freedom and allowed him to survive,” Francie Heller said. “He was a great humanitarian.”

Adam Chanes is a Forward intern.