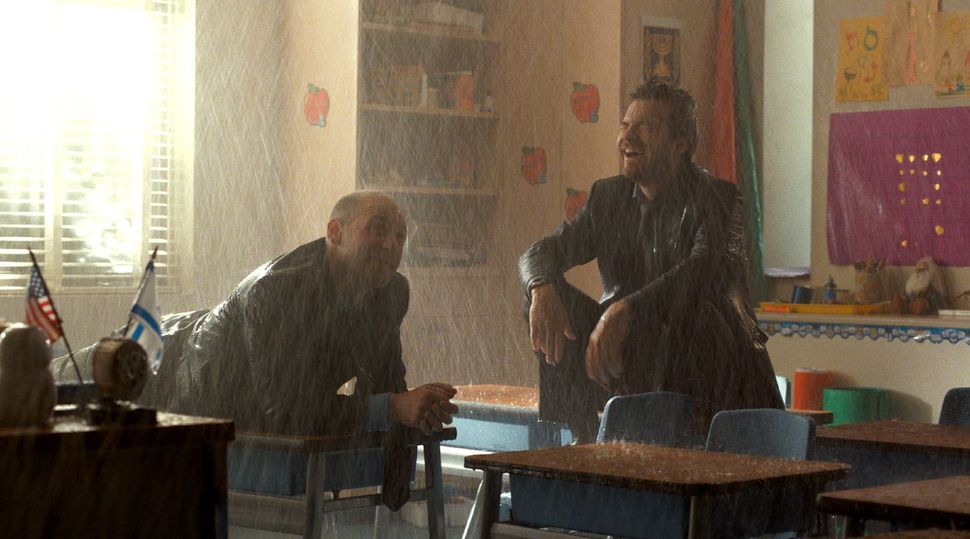 Let It Come Down: Corey Stoll and Jason Bateman set off the sprinkler system in ‘This Is Where I Leave You.’ Image by Warner Brothers

As someone who didn’t grow up in the United States, watching Hollywood films can sometimes be tricky; it’s hard to tell what the filmmakers made up and what represents reality.

When I moved to the United States two years ago, it wasn’t like I expected to encounter action heroes who never need toilet breaks, background music that tells you when it’s time to kiss someone, or people who wake up in the morning with perfect hair and make-up.

But I was surprised to find that red plastic cups — an essential prop in teenage movies — can be purchased at most supermarkets (and are used by party-goers), and that most people have very straight and very white teeth.

And I was truly taken aback when I discovered that the prominent presence of two common features of Hollywood movies was an accurate depiction of my American reality: emotions and Jews. Public speakers who choke up on their own words, people making their emotional hardships public and picture frames with love poems inscribed on them were among the first things I encountered when I came to New York from Vienna. And so were storefronts with mezuzas, Hasidim on the street and Jewish newspapers with a significant readership.

I was exhilarated. I felt I could forgive a film industry for its love of perfect looks and aversion to toilet breaks. After all, it got right the really important things — from Jews on the street and overflowing emotions to white teeth and plastic cups.

All of which is to say that I enjoyed watching the film adaptation of Jonathan Tropper’s best-selling novel “This Is Where I Leave You,” for the bourgeois bagel-and-shrink-Jewish world in which it exists. The witty, screwball-type dialogue coupled with the joy of recognizing the defining features of its milieu allowed me to gloss over the abundance of clichés as well as the surprisingly stiff acting despite (or because of) an all-star cast.

The story itself bears a strong resemblance to Tropper’s other five novels: The main character is a white male under the age of 50 (Judd Altman, played by Jason Bateman, is in his mid-30s) who is facing a crisis not only in his love life (in this case, Judd discovers that his wife is having an affair with his boss) but also in his professional life (Judd quits his job, perhaps understandably), which is usually in the creative business (in this case, a radio show). He sulks, drinks too much, eats junk food, has flashbacks to the happy parts of their relationship, which usually involve a lot of sexual intercourse, and repeatedly reassures the reader that he is aware of his despicable behavior. Then a family event forces him to face the real world again (in this case, his father’s death and his last wish for his entire family to sit shiva at their childhood home in upstate New York).

This makes for a highly entertaining 103 minutes, sprinkled with wise observations about the meaning of life, love and family, and generously seasoned with any emotion you could conceive of: grief, guilt, regret, jealousy, sibling rivalry, embarrassment, pity and, of course, love in all its shades: There is motherly, fatherly, brotherly and sisterly love; old love, new love, unrequited love, hurt love and desire taken for love. It’s pretty much all the protagonists talk about.

Shawn Levy, who was behind the “Night at the Museum” franchise and several other blockbuster comedies, directed and co-produced the film. Tropper adapted his own novel (and cut out much of the individual characters’ back stories, which provide psychological depth in the book), which makes fun of the progressive but bourgeois Jewish set-up and the obsessive self-involvement of his protagonists. Watching the movie and recognizing types and things that my time in New York has taught me were actually reality — such as the eager, young Reform rabbi (played incredibly by comedian Ben Schwartz), the suburban Hebrew school or the neurotic, overachieving New Yorker 20-to-30-something — made me feel like the kid who grasped the order of operations rule and could finally make sense of what the math teacher had been talking about for months.

The Altman family members are supposed to be crazy in a Jewish-neuroses-adapted-for-Hollywood kind of way, which means that they have complicated relationships with each other and with their own egos, and joke about it while maintaining their hairstyles and make-up. Interestingly, actual Jews in the main cast are scarce — Jane Fonda plays the mother; Tina Fey, Adam Driver, and Corey Stoll star as Judd’s siblings; Rose Byrne, Kathryn Hahn and Timothy Olyphant co-star as some of the characters’ various love interests past and present. Only Corey Stoll (best known from the television series “House of Cards”) is a member of the tribe. And for some reason, the entire family didn’t feel particularly Jewish. Maybe it was because Jason Bateman’s “Mazel tov” didn’t seem quite genuine — which could be caused by the fact that Bateman generally seemed to know only one facial expression, whether he was consoling elderly relatives or hooking up with an old love.

Viewers will leave the movie theater having learned some valuable but admittedly clichéd life lessons (life is complicated, having a sense of humor helps, don’t cheat on your partner, love is a funny thing) and perhaps in need of a bathroom mirror to check for the remnants of the tear-jerking moments, which didn’t even leave my hardened European soul untouched.

I couldn’t help but notice that the film shares an aversion to (metaphorical) toilet breaks with mainstream Hollywood movies: There is background music that sets in when the silence could become awkward, people who show up at the right moment to avoid embarrassing answers, and good hair and make-up seemingly 24/7. I have yet to meet the people whose reality this represents.