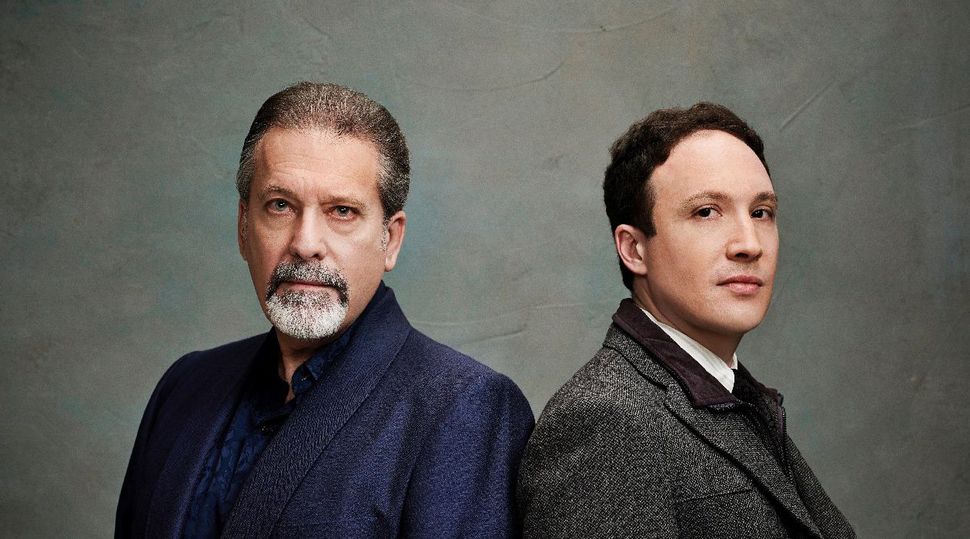 Like Father, Like Golem: Jonathan and Jesse Kellerman set their fanciful new thriller in Hollywood. Image by Joan Allen

● The Golem of Hollywood
By Jonathan and Jesse Kellerman
Putnam Adult, 560 pages, $27.95

Jonathan and Jesse Kellerman’s father-and-son opus, “The Golem of Hollywood,” is as ambitious as it is completely ridiculous — and that’s not altogether a bad thing. The novel’s protagonist captures some of the story’s scale and confusion: Jacob Lev is a hard-drinking, twice-divorced Harvard-dropout-turned-hardboiled-Los-Angeles-cop (got all that?) who’s already thoroughly washed up at the tender age of 31. But unlike most world-weary cops before him, Lev also happens to be a lapsed Orthodox Jew, the son of a Talmud scholar father and depressive artist mother. It’s his religious heritage, admittedly rare among cops, that gets him recruited to a special branch of the LAPD on the same morning that he wakes up with a mysterious — and, obviously, totally hot — woman.

Soon after this dream woman vanishes, Jacob is summoned to the scene of a grisly murder, in an abandoned house in an off-the-grid part of the Hollywood Hills. There, Jacob discovers some vomit and a decapitated head that “glistened surreally, like a gag item fished from the ninety-nine-cent bin at a novelty shop.” There’s no body in sight, and the crime scene is otherwise immaculate, but for the Hebrew word for justice, tzedek, burned on the wall.

From this premise the father-and-son writing team spin a tale spanning many millennia and several countries and countless leaps of plausibility. If the story starts out unassuming enough for this genre, with the usual details about the crime and the spiked-coffee-swilling detective’s character, the authors suddenly lunge far, far back in time, all the way to Cain and Abel, where we meet the forgotten sister of the first family. (It’s impossible to miss this transition, by the way, because someone in production went all out and fake-aged the pages to resemble biblical parchment.)

Cain and Abel’s sister Asham, we learn, is matchlessly beautiful, and the source of great rivalry between the brothers — it’s the desire to win her, the authors imply, that’s the real motive for the first murder in history. As the cold-hearted but compelling Cain implores his sister shortly before bludgeoning Abel:

“We could build a whole world together,” he says.

A few pages earlier, she has a comparably heavy conversation with Abel:

“It isn’t greedy to love someone,” Abel says.

“Yes,” she says. “There’s nothing greedier.”

What, you might well, be asking, do Cain and Abel have to do with a contemporary killer prowling the streets of LA? Not a bad question, and the authors spend some 500 pages (yes, this book is a whopper) and many mini-storylines weaving the two strands together. As Asham travels into the wilderness to avenge Abel’s death, back in modern times (signaled by a return to regular white paper) Jacob follows the equally elusive path of the Hollywood Hills murderer. Oh, and he also must contend with a gigantic murderous beetle that begins to haunt his nightmares and, more troubling still, prevents him from having sex.

As Jacob gets deeper into the murder investigation, he stumbles upon connections to a serial killer from several decades earlier. He eventually flies to Prague and then Oxford to investigate a string of unsolved murders — and that’s where things get really freaky. Jacob goes to the synagogue in Prague where, in the 16th century, Rabbi Judah Loew supposedly constructed the Golem of Prague, a mythical monster known for avenging crimes against Jews in particular. But, as Jacob learns about the original Golem and the man who built him, he also makes some startling discoveries about his own family. At this point, the improbabilities pile up and it becomes hard work to stick with this gritty-procedural-cum-paranormal-thriller-cum-religious-myth-retelling, especially when the contemporary crimes take the backburner.

In the end, though, the authors pull it off: They bring all the separate storylines together in a sufficiently convincing manner. And if “The Golem of Hollywood” is as absurd and over-the-top as its title implies, it also makes for an entertaining ride — it’s hard to put down, even during the most out-of-control passages. This reader found it impossible not to admire the ambition of a novel that fuses Genesis with 16th-century Prague with modern-day California. One can almost imagine the father and son brainstorming the all-over-the-place narratives over morning lattes: Hey, in addition to some creepy murders, why don’t we rewrite the Cain and Abel story? Cool — and how about if we throw in some murderous oversize beetles, too? Awesome idea — let’s go for it! If you succeed in reading the “Golem of Hollywood” in that spirit, you can have quite a decent time with it.

Laura Moser writes frequently about books for the Forward.