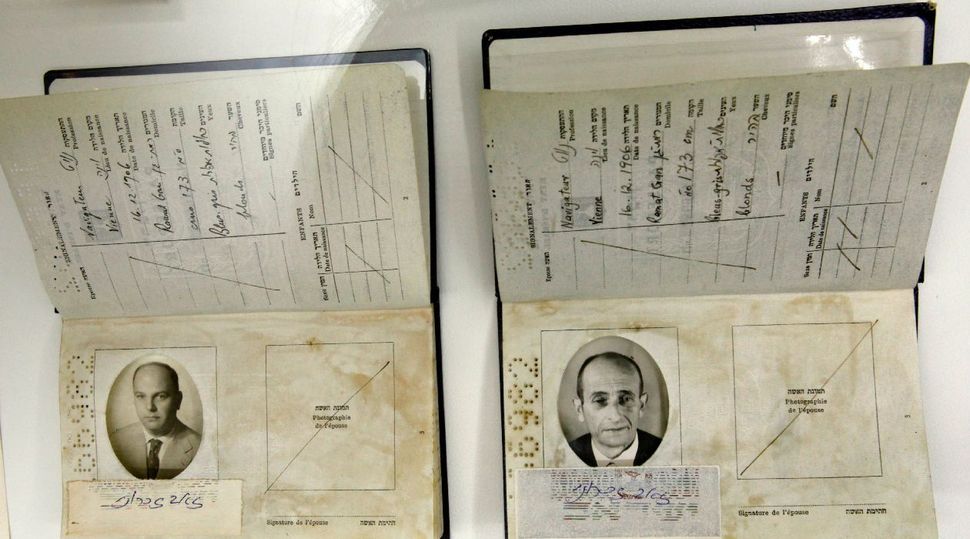 The Banality of Identification: Fake passports, one used by an Israeli Mossad agent (L) and another one manufactured to fly Adolf Eichmann (R) out of Argentina. Image by Getty Images

● Eichmann Before Jerusalem: The Unexamined Life of a Mass Murderer
By Bettina Stangneth, Translated from German by Ruth Martin
Alfred A. Knopf, 608 pages, $35

It seems a stretch to think of Adolf Eichmann as having had an “unexamined life.” Since his 1960 trial in Israel, and Hannah Arendt’s controversial 1963 account, “Eichmann in Jerusalem: A Report on the Banality of Evil,” Eichmann has come to symbolize both the horrors of the Holocaust and the supposed mediocrity of its perpetrators.

It is not entirely fair to say that Arendt thought of Eichmann, who supervised the deportation of millions of Jews to the death camps, as a mere cog in the Nazi bureaucracy. Her assessment is more subtle. “There were two things Eichmann could do well, better than others: He could organize and he could negotiate,” she wrote.

But Arendt did dismiss Eichmann as an unthinking purveyor of Nazi clichés — less a monster than “a clown.” To Arendt, who covered the trial for The New Yorker, Eichmann represented the potential for evil in anyone ensnared in a murderous totalitarian regime. “The trouble with Eichmann was precisely that so many were like him, and that the many were neither perverted nor sadistic, that they were, and still are, terribly and terrifyingly normal,” Arendt wrote in a frequently cited passage.

In “Eichmann Before Jerusalem,” Bettina Stangneth, an independent German philosopher, sets out to revise and amplify Arendt’s assessment. Her Eichmann, if not entirely a monster, is more monstrous — a “master of self-promotion,” intelligent, ambitious, deceptive and far more ideologically committed to his mass-murdering assignment than Arendt seemed to believe.

Stangneth’s portrait of Eichmann matters, in part because of the outsized role he has played in discussions of Holocaust perpetrators. But at least as important is her review of West German complicity in Eichmann’s long Argentinian sojourn and her well-placed outrage at the refusal of the current German government to open all relevant files.

Yet, even apart from the odiousness of its subject, “Eichmann Before Jerusalem” is a difficult volume to plough through. Stangneth’s scholarly proclivities produce a welter of detail, some of it purely methodological, rather than an absorbing narrative. She engages deeply with what we might call Eichmann’s “philosophy,” an ever-shifting set of justifications for ideologically inspired mass murder that defy both logic and humanity. And she becomes mired in the process of deciphering the voluminous, fragmentary and scattered paper (and aural) trail Eichmann left behind.

Influenced by academic postmodernism, Stangneth is interested less in conventional biography than in images of Eichmann: how he was perceived by various audiences and how he actively fashioned his image over time. She sees Eichmann’s self-presentation during his trial not as a revelation of character, but as a performance designed to aid his defense. “The intention is obvious: he was doing his best to stay alive and justify his actions,” she writes.

Central to Stangneth’s project are Eichmann’s writings in Argentina and the taped interviews that he gave to a sympathetic journalist and former Dutch SS man named Willem Sassen, beginning in 1957, in the company of other unrepentant Nazis. (Some portion, but far from all, of this material was available to the Israeli court and to Arendt.)

In Argentina, Eichmann was more apt to boast of his role in killing Jews than to express remorse. “I have no regrets!” he said at one point. One irony is that Sassen and other allies were engaged in an early effort at Holocaust denial, which entailed minimizing the number of Jewish deaths at Nazi hands. But though he tried at times to oblige, Stangneth writes, “a high body count really did give Eichmann an extraordinary sense of satisfaction.”

During the war, Stangneth reports, Eichmann had reveled in his growing notoriety: “As his name developed into a symbol of the Holocaust, Adolf Eichmann kept a close watch on it; indeed, both he and his superiors specifically encouraged the development. He wanted to be anything but the ‘man in the shadows’ that he sometimes claimed to be.”

What galled Eichmann most during his Argentinian exile, he himself said, was his relative anonymity. After escaping from Allied custody and hiding out in northern Germany, he had fled to Argentina in 1950 under the name Ricardo Klement. After a separation that lasted seven years, he was joined by his wife and children, who didn’t bother to change their names. In Argentina, he worked as a manager at a hydroelectric plant and a rabbit farmer (among other jobs), and embedded himself in a community of not-so-ex-Nazis that included Sassen.

At one point, Stangneth tells us, Eichmann contemplated standing trial in Germany, feeling certain that any punishment he received would be mild. But despite the best efforts of Fritz Bauer, attorney general for Hesse, the West German government, riddled with former Nazis, had no appetite for an Eichmann trial. He was, in Stangneth’s analysis, the man who knew too much, and who might implicate too many others.

Little of this is truly surprising. In 2011, the German newspaper Bild broke the story that German foreign intelligence knew of Eichmann’s approximate whereabouts as early as 1952, and did nothing. Other relevant intelligence files remain closed or difficult to access, suggesting that more revelations may lie in store.

“If one thinks how many classified documents must still be sitting in various archives, and how little enthusiasm there is for transparency,” Stangneth writes, “the facts become both obvious and embarrassing: before Eichmann was abducted people didn’t want him to be brought to trial in West Germany — and there are still people who don’t want transparency on who, and why this was.”

With West Germany unwilling to act, it took the Israeli Mossad, prompted by various tips, to kidnap Eichmann in 1960 and bring him to trial. In Israel, Eichmann produced yet more writing and spoke freely, if misleadingly, to investigators. None of the bluster or excuses did him any good; he was executed by hanging in 1962. But, in death, Eichmann was once again granted his wish for celebrity: We have hardly stopped talking about him since.