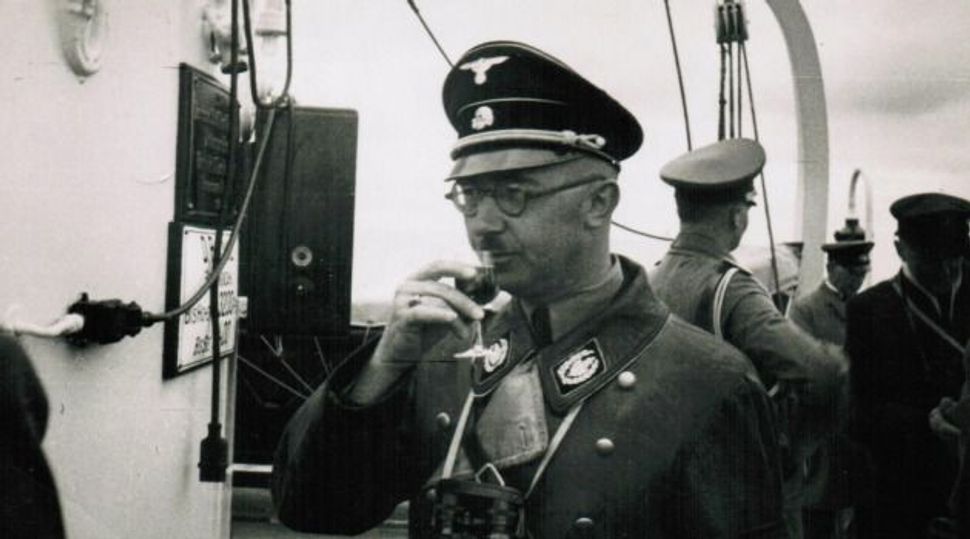 The genius of “The Decent One,” Vanessa Lapa’s disturbing new documentary about the man most directly responsible for the extermination of over six million Europeans, mostly Jews but also gypsies, gays and anyone else deemed unworthy by the Nazi regime, is that she in no way tries to differentiate between the man and the monster. Instead she vividly recreates them both, through an artful arrangement of archival footage and material from Himmler’s personal documents, which include diaries, photographs and correspondence with both his wife and his mistress.

Lapa tells the story via historical images and videos, but eschews the traditional voice-over in favor of actors reading selections from Himmler’s private writings and those of his wife and daughter. The effect is unsettling: The mostly black-and-white images belong to the past, but the soundtrack, which meticulously reproduces the street sounds, music and ambiance of wartime Germany, jars us into a sense of immediacy one rarely associates with archival footage. And as we pass from his uneventful childhood and school days to his early encounters with Hitler and his rise to power within the Third Reich, Himmler in no way earns our sympathy — he is self-aggrandizing, awkward and arid in even his most impassioned notes, and almost entirely humorless, but we recognize him nonetheless as a familiar type. He works hard, believes in his job, cheats on his wife, and believes in the power of organization and discipline.

This is not the banality of evil as Hannah Arendt described it. Himmler he believed passionately in the moral rightness of the task at hand. We may seek comfort, in the face of evil and madness, in believing that the agents of madness destruction were mad themselves. “The Decent One” offers no such comfort.

Lapa, who was born in Belgium and moved to Israel when she was 19, sat down for coffee with the Forward’s Sheerly Avni in Telluride earlier this month, where the film held its American premiere.

Sheerly Avni: Perhaps we should start by talking about how you first came upon Himmler’s papers, which is a story so dramatic that it almost deserves its own movie.

Vanessa Lapa: Before he killed himself, Himmler left instructions with his secretary to burn all his private papers, but she didn’t have time to do it before the American forces took over his house. And his collection was stolen by American soldiers. I don’t think that 19-year-old soldiers even really knew what they were doing — but they knew it was Himmler, so maybe there would be some money. The collection — whatever they found in his safe — was divided in two. One part, which covered the years from 1910 to 1926, was exchanged in a bar in Chicago for two bottles of whiskey. That collection is now at Stanford University.

But the second half, which covers the period between 1927 and 1945, is much more complicated. What we know for sure is that from 1960 on, an Israeli named Chaim Rosenthal kept the collection under his bed in a black box. He was obsessed by it; he later told us it destroyed his life. But he never had any of the papers translated. Seven years ago his son finally convinced Rosenthal to get rid of the documents, and brought them to a friend of his, who knew me through my work as a reporter for Israeli television, and it was this friend, Rosenthal, who brought them to me.

And how did Rosenthal get a hold of the documents?

It’s a mystery. Either a flea market in Belgium, or in LA, or he pilfered them from a couple on the Texas-Mexico border. According to that story, he took it “to check something” and never gave it back. For the first year, I was trying to just figure out which story was true, where it came from. And then finally I realized, of course, what I needed to do was get the documents translated.

And then in the translations, you found this almost ordinary person, starting with his uneventful childhood. Did you find anything unusual about his upbringing?

Unfortunately not. His parents did what parents do. They loved him, they took care of him, they gave him money to study in Munich. They were Catholics so they made him go to church, but he wasn’t forced into religion in an extreme way. But certainly he was raised in a strict environment. But there is one thing that we didn’t end up putting in the film: Throughout his childhood, his father was reading and correcting his personal diaries. I had a diary as a girl — the worst thing I could imagine would be my mother reading it!

He was also a sickly child who came of age as his country was losing a war.

Yes, the nationalism of his parents was a very big thing. And he couldn’t stand the fact that he wasn’t able to fight for Germany during World War I.

At first, he doesn’t even write much against Jews. The first anti-Semitic reference in his diaries was connected to meeting a pretty Jewish girl in a club.

Yes, he was attracted to this beautiful girl from Vienna. And he liked her and at the end of the day she deserves respect — the only problem is that she’s Jewish. And yes of course he is an anti-Semite — but even there, we shouldn’t simplify. He felt the same way about homosexuals, about the handicapped.

This is why we can’t just say, “He’s a monster,” because every step he took in his life, every new decree, every new decision was one he justified rationally. And this is why he’s so relevant today — and so dangerous. He’s wasn’t standing on the street corner of the street screaming, “Kill the Jews, they have big noses!”

But when you listen to his speeches, and the mathematical logic he uses to justify his policies — when he explains that every family in the nation should have x amount of children, and homosexuals become a liability because they limit the number of Germans who need to be born. The conclusion: Therefore, we have to kill them.

Right, he is appealing to logic, even if it’s faulty logic. And I hear that kind of logic coming out of the mouths of politicians today, all over the world, and find it frightening. It could be anywhere, in the U.S., in Belgium, in Russia. And in Israel too, of course. Although in Israel, people usually speak about the conflict between Jews and Arabs, but I am much more concerned about what is happening inside the country, for example there was a school in Israel a few years ago that refused to allow Ethiopian students. I find that to be very frightening.

I do think that one of the lessons we can learn from Himmler’s story is how dangerous nationalism can be, the idea of being ready to die and kill for a country. And then if you get the right combination of a specific geopolitical situation, an economic crisis, a few people who are extremely nationalistic, and a few leaders who know how to exploit this, well, then it can be very dangerous.

‘The Decent One’ opens on October 1 at Film Forum in New York. Vanessa Lapa will be present at screenings from October 1-4.