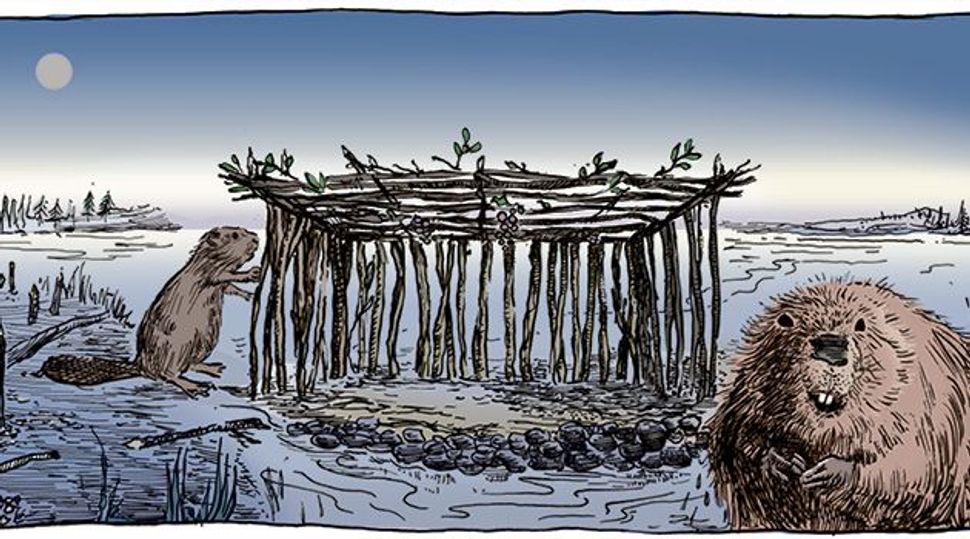 Seen one sukkah, seen ’em all — or so Rain Chan-Kalin thought.

The 20-something project designer at Berkeley design/build firm Friedman Brueggemeyer grew up around garden-variety sukkahs and describes them as if she’s reciting a recipe for a not-especially-delicious meal: “three walls, maybe part of a fourth; some sort of plastic sheeting or fabric; reeds on top.” Hardly stimulating stuff. But when, out of curiosity, Chan-Kalin researched the halakhic rules for sukkah-building, she was surprised to learn how uncircumscribed they are.

“There’s this standard design which people tend to stick to, but as an architect, of course I’m thinking, ‘Well, could you do this in a different way?’”

The opportunity to do that presented itself earlier this year when Chan-Kalin discovered SukkahPDX, a design competition put on by the Oregon Jewish Museum and Center for Holocaust Education. The contest, now in its third year, invites “designers, artists and makers of all backgrounds” to submit proposals that explore these ancient structures from a contemporary perspective. Finalists, picked by a jury of experts in architecture and sukkah-related Jewish law, get a small stipend to build their structures at the Portland museum for an exhibition timed to coincide with Sukkot. (This year’s show runs October 8 through October 17.)

In a way, interpreting Halakha isn’t so dissimilar from what designers like Chan-Kalin normally do. “Within Jewish law, there are many very detailed rules about how a sukkah is constructed. If you compile all those rules together, it sort of reads like a contemporary architectural brief,” says SukkahPDX co-curator Coren Rau. “The idea is to take the traditional rules that come out of Judaism and open that up to designers who may or may not be familiar with that tradition, to seek out contemporary re-interpretations of that structure.”

As in modern architecture, some elements of the sukkah are not open to interpretation. Most importantly, Jewish law is clear that the roof — the s’chach — must be made from material that “grew from the ground and was cut off.” It must let people inside see the stars at night, and must provide more shade than sun during the day. Plus, the walls have to come close enough to the ground to keep a goat from getting under and disrupting the festive meal. (Really.) Beyond that, though, Rau and co-curator Sandra Oberdorfer aren’t sticklers.

“We’re interested in bringing people into this event who are engaging with those requirements in a thoughtful, even playful kind of way, more than checking off every single box,” says Rau.

When it comes to the sukkah itself, there’s much to be thoughtful about. On a biblical level, of course, the structures commemorate the 40 years the Israelites spent living in “booths” while they wandered the desert. But sukkahs also recall the huts ancient Jewish farmers lived in during harvest-time, and in fact probably predate Judaism. That gives even non-Jews a point of entry into the tradition.

“As a holiday that’s so tied to the natural seasons, it allows an openness to people who aren’t born into Judaism,” Oberdorfer says. “You don’t have to identify with wandering in the desert for 40 years.”

Sukkot’s meld of agrarian and cultural influences also imbues the sukkah with a multitude of meanings. The permeability and fragility of the structure at once evokes our connection with, yet utter smallness before, nature. The commandment to host family, friends and even strangers in the sukkah is a reminder of the importance of social bonds. The structure’s impermanence serves as a memento mori.

To Rau, the sukkah is about community. “I think it’s telling that we’re encouraged to sit together in that fragile space and think about the fact that maybe some of our security comes from the people we share our lives with,” the artist says.

For this year’s SukkahPDX finalists, announced earlier this month, the sukkah means different things. Chan-Kalin, along with her colleagues at Friedman Brueggemeyer, was among the winners; her team’s highly symbolic design was inspired by the scripture behind Sukkot. The seven sides of their proposed structure are a reference to the seven “clouds of glory” which the Torah says surrounded the Israelites during their wilderness wandering. (Some believe these clouds were the sukkah.) The roof, made of intricately woven, plant-dyed yarn, shows the constellations as they would have appeared above Mount Sinai around Sukkot. 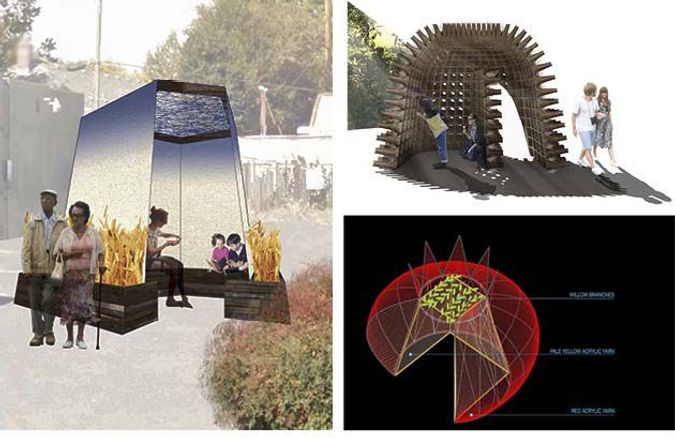 Not Your Ancestors’ Sukkah: Among this year’s finalists were designs by Friedman-Bruggemeyer Design Build; a team of Berkeley architecture students; and the Eugene-based team of Yulia Dimitrova-Ilieva and Petar Iliev, who based their design on a pomegranate. Image by Courtesy of SukkahPDX

“I was thinking about what it would be like to be traveling around for 40 years and looking up at the sky at night,” Chan-Kalin says. “What better way to have that idea than to close off everything around you and then look up and see the constellations your ancestors would have seen during that time?”

Yulia Dimitrova-Ilieva and Petar Iliev, a team based in Eugene, Oregon, drew inspiration from the sukkah’s agricultural roots: They designed their structure in the shape of a pomegranate to represent Israel’s bounty. Comprised of a frame of metal wire, rods, and stripboards supporting an outer layer of vivid red yarn, Dimitrova-Ilieva and Iliev’s design engages with the simultaneously open and closed nature of the sukkah. “It feels enclosed, but still stays really permeable to the outside because of that open, woven structure,” says Rau.

“Fleeting Moments,” a winning design from a team of Berkeley architecture graduate students, is made up entirely of cone-shaped “apertures” that offer people moving about within the sukkah constantly changing views of the world outside.

“The aspect of the sukkah that inspired us most was the idea that it symbolizes the transience of life,” explains team member Jessica Chen. “We decided to create a sukkah that would capture the fragments of our ever-changing lives to create a collection of ‘fleeting moments’ to contemplate.”

Chen’s team also impressed the jury with its plan for repurposing its sukkah materials. SukkahPDX has always encouraged re-use — by, for example, limiting the construction stipend to just $400 — but this year organizers added a requirement that designers actually propose future uses for their materials. Chen and her teammates suggested “Fleeting Moments,” which is made of recycled plywood, could be disassembled into a bench, a children’s play structure, and a living wall. “Sukkah design inspires us to re-evaluate the life of buildings and their purpose,” Chen says. “Simple design moves like using natural materials are still relevant today.”

The link between sukkahs and sustainability is just one connection Rau and Oberdorfer seek to draw between the age-old structures and current issues. Past years have seen the Oregon Jewish Museum host panel discussions on housing and food access in conjunction with the competition, and in 2013 SukkahPDX partnered with Habitat for Humanity and other groups for a day of service.

“We think it’s important to look at what the tradition of Sukkot has to offer in terms of an opportunity to look at the issues that are going on in the world, and what people might be able to do to engage with those in a more active way,” Rau says.

Indeed, while SukkahPDX is a design competition with now-international reach — one of this year’s winning submissions came from Parma, Italy — it’s also a kind of local outreach campaign. Tying Jewish culture to social justice and engaging with Portland’s flourishing design scene, the competition is a bid for relevance in this progressive, creative class-dominated city. A 2011 census conducted by the Jewish Federation of Greater Portland found that the city’s Jewish population was nearly twice as large as previously believed — 47,500 versus 25,000 — with much of that growth assumed to be from young, unaffiliated transplants. Since then, local Jewish organizations such as the Oregon Jewish Museum have struggled to bring this lost tribe into the fold.

“SukkahPDX started as part of a set of projects designed to connect the museum to new segments of the Portland community,” Rau says. “The fact that the design community is so active in Portland means there’s a ready, educated audience for this kind of work.”

For evidence that the competition is reaching its targeted demographic, Rau and Oberdorfer point to Shabbat in the Sukkah, a party the museum throws each year on the Friday night that falls during Sukkot. “We get people who are really just there to see the sukkahs — and that’s enough,” says Oberdorfer. “I love it when I see people who are like, ‘Oh, my bubbe would be so happy that I’m here!’”

Chan-Kalin, from the Friedman Brueggemeyer team, says SukkahPDX’s archaic, often arcane requirements taught her and her colleagues a valuable lesson about innovating within limits. The challenge of the competition, like the challenge of contemporary architecture, she observes, is “working within traditions, but then at the same time trying to come up with something new.” For the designers of tomorrow’s Jewish culture, the architectural brief looks much the same.

Jonathan Frochtzwajg is a freelance writer based in Portland.