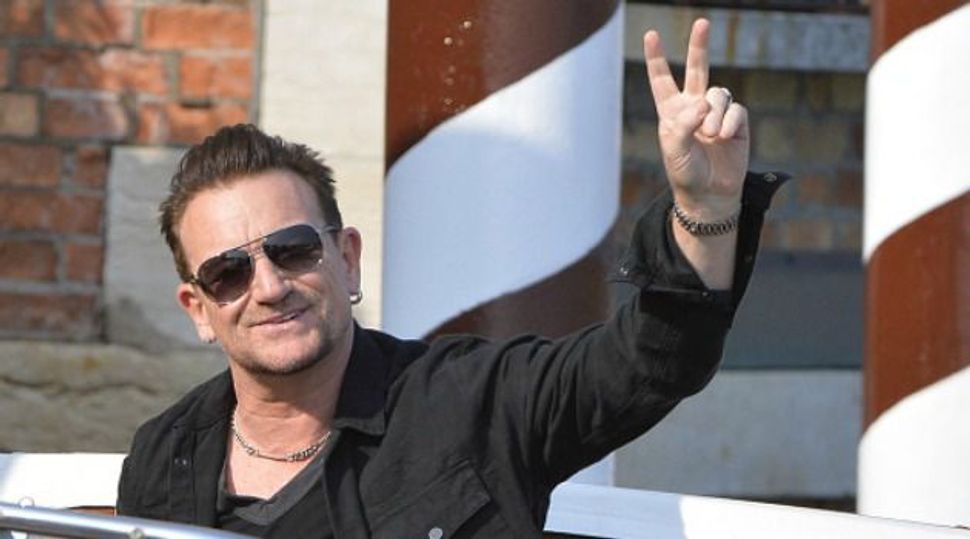 He Will Be Followed: Lead singer Bono has credited Jewish German poet Paul Celan with having had a deep influence on his own writing and turning around his approach to narrative. Image by Getty Images

While U2 is still largely considered one of, if not the greatest rock band in the world, the group’s singer and frontman, Bono, is not quite the beloved figure he was when the band first exploded on the scene in the mid-1980s. His hobnobbing with world and corporate leaders is very un-rock ’n’ roll, and his campaigns addressing serious global issues like debt and AIDS have made him seem, at least to some, to be smug and self-righteous.

Combine all that with his preachy anthems of transcendence and deliverance, and Bono becomes a world-class target for cynics and haters of all kinds. Which is really too bad, because of all the would-be rock ’n’ roll prophets, Bono really does seem to be the most sincere and the most effective at shining light in dark places and being an agent of change.

Bono challenges himself with some considerable role models — none weightier than Jesus himself. While fans and theologians alike debate just how significant a role Christianity plays in Bono’s life, there’s no denying that his lyrics are filled with Christian themes and imagery. And while not openly identifying with any specific church since he and bandmates David “The Edge” Evans and Larry Mullen, Jr. left the Shalom Fellowship, a Christian cult they belonged to in Dublin in the late 1970s and early ’80s (Adam Clayton, the group’s bassist, is the band’s lone religious skeptic), Bono certainly makes no secret of his beliefs in interviews or in his public actions, such as appearing with the Pope and allowing His Eminence to model his trademark wraparound sunglasses.

But the Father, Son and Holy Ghost aren’t Bono’s only role models. Judging by his cover tunes alone, he worships another trinity — the three great Jewish singer-songwriters of the rock era: Bob Dylan, Leonard Cohen and Lou Reed, each of whom invested rock ’n’ roll with religion and spirituality and allied it with the prophetic impulse that is so strong in Bono’s work as a songwriter and an activist.

In concert and on recording, U2 has variously covered Cohen’s “Hallelujah” and “Tower of Song”; numbers by Lou Reed and his band, the Velvet Underground, including “Perfect Day,” “Sweet Jane,” and “Satellite of Love”; and numerous Dylan tunes, including “Maggie’s Farm,” “The Times They Are a-Changin’,” “I Shall Be Released,” “Knockin’ on Heaven’s Door,” and “All Along the Watchtower,” which is a loose rewrite of chapter 21 of the book of Isaiah. The group’s new album, “Songs of Innocence,” kicks off with “The Miracle (Of Joey Ramone),” a tribute to another great Jewish rock star: the late frontman of the seminal punk outfit the Ramones, born Jeffrey Ross Hyman.

While many of U2’s lyrics refer to Christian scripture, as far back as the band’s very first hit, “I Will Follow,” they’ve also made extensive use of Jewish themes and imagery. The refrain from that number, “If you walk away, walk away/ I walk away, walk away/ I will follow,” recalls the story of the biblical Ruth. The group’s concert staple, “40,” is a poetic rewrite of Psalm 40. The band’s hit, “Bullet the Blue Sky,” references the biblical Jacob wrestling with an angel.

Bono has even credited Jewish German poet Paul Celan with having had a deep influence on his own writing and turning around his approach to narrative. He pays tribute to Celan in “A Sort of Homecoming,” the opening track of U2’s 1984 album “The Unforgettable Fire,” which introduced a new U2 sound and approach that would find its ultimate realization in mega-seller “The Joshua Tree.” The song takes its title from a line by Celan, in which he writes, “poetry is a sort of homecoming.”

U2 performed in Israel in 1997. In 2009, U2 famously rescheduled a concert at Giants Stadium that conflicted with Yom Kippur. That same year, Bono collaborated with Israeli folk-rock superstar David Broza on a recording of Bob Marley’s “War/No More Trouble” for a charity CD. Bono again visited the Holy Land in 2012, staying at the King David Hotel in Jerusalem, whereupon checking out he wrote in the guestbook, “In Jerusalem, hope springs eternal.” Evans, meanwhile, is married to Morleigh Steinberg, a Los Angeles-bred dancer and choreographer who was a co-founder of modern dance troupes MOMIX and ISO; they have a son named Levi.

For many years, U2’s career was adroitly overseen by lifelong friend, Paul McGuinness, who — like Brian Epstein with the Beatles before him — was viewed by his bandmates as practically a fifth member of the group. When it came time for McGuinness to retire, however, the band took no chances and opted to put their fate in the hands of Israeli-American talent manager Guy Oseary, whose A-list client roster includes that other mystically inclined pop superstar, Madonna. (Oseary also authored the book “Jews Who Rock.”)

Come to think of it, that’s not surprising in the least for a group that puts its faith in Bob Dylan, Leonard Cohen, Lou Reed, Joey Ramone, Paul Celan — and that other great Jewish rock star, Jesus Christ.