How Jill Soloway Created ‘Transparent’ — the Jewiest Show Ever 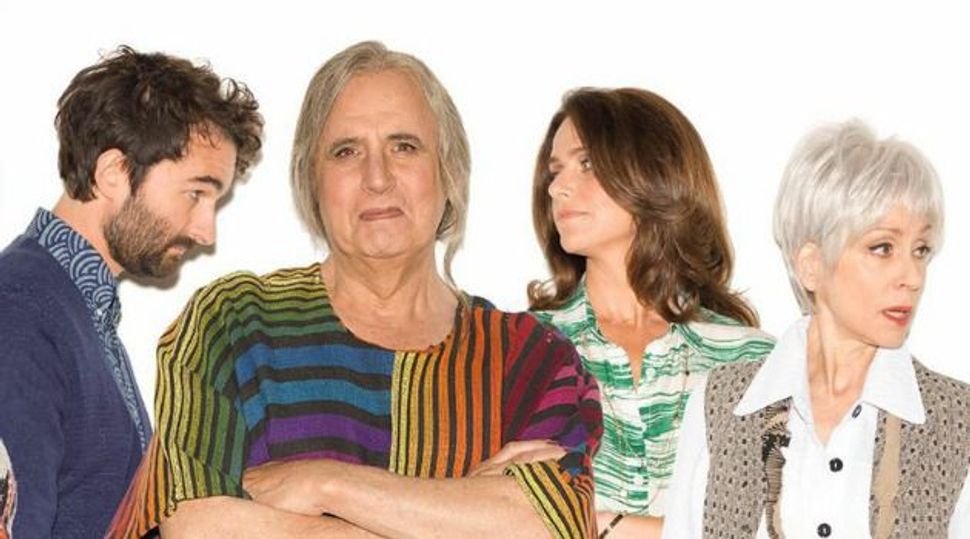 On its face, “Transparent” is a television series about a transgender father coming out to his three young adult children. It weaves together the tragicomic family dynamics of five unbelievably narcissistic people. It is also arguably the Jewiest television show ever.

Sure, lots of television shows have featured Jewish characters. In long-running series like “Seinfeld,” “Curb Your Enthusiasm,” “The Simpsons” and even “The Daily Show with Jon Stewart,” Jewishness amounts to little more than pairing Jewish touchstones like babkas and brisses with ambivalence about Jewish identity and ritual as the fulcrum for jokes. “Transparent,” in contrast, shows a family — not a religious Jewish family, but one that is in many respects typically American — connecting with Jewishness in fits and starts, treating Judaism in an intimate and lovingly familiar way.

“Transparent,” on Amazon Prime Video, is also probably the first television show to feature a fully-fleshed out female rabbi as a key character — and to show a corpse, that of the mother’s second husband, being gently wrapped in tachrichim, or burial shrouds.

“It is so Jewy. We got away with that much Jewiness? I can’t believe it,” said series creator and executive producer Jill Soloway, in an interview with The Forward. Surprisingly, today “it’s more controversial to be Jewy than trans,” she said, pointing to some of the nauseatingly anti-Semitic comments left on YouTube under the series trailer. “There are more people saying horrible things about Jews than about trans people. It’s crazy.”

In one episode, the 13-year-old version of Ali, the youngest sibling, feels overwhelmed by her impending bat mitzvah and tells her father she wants to cancel it. He agrees, secretly wanting to go to a retreat for transgender men that weekend. Ali, who is as manipulative as everyone else in her family, frames it as a theological crisis. “Honest, do you even believe in God?” she asks her father. “That has nothing to do with your bat mitzvah,” he replies. “But um, you know, I sometimes have conflict. You know I wonder, with the pain and the suffering and… I struggle with it.”

“So if there’s no God, I mean honestly, like everything we do… no one sees it,” Ali says.

Next thing you know, he is telling his wife, Shelly, that he wants to cancel it. “I say cancel the fucker,” he says. “Do you know how much money we’ll lose?” Shelly says.

“It’s going to be less money if we cancel it now.” “What do you want me to do?” she says, almost rhetorically. “I don’t want you to do anything, Shel,” he says. “It’s not your bat mitzvah.” And in a line sure to resonate with any mother who has organized a child’s bat mitzvah, she says, indignantly, “It most certainly is!”

“Transparent” premiered a week after the movie “This is Where I Leave You” opened. The film is about a family of four young adult children whose gentile mother, played by Jane Fonda, insists that they sit shiva for their recently deceased father, who was Jewish. The movie uses Judaism just as other manifestations of pop culture do: as a dramatic device and in broad strokes that make clear its universalistic inclinations. “Transparent,” on the other hand, is more nuanced in its Jewish particularism than anything ever seen on screens big or small.

In one flashback in the episode titled “The Wilderness,” the father, who is played with great sweetness and sensitivity by Jeffrey Tambor, is holding an issue of lefty Jewish intellectual journal Dissent when Shelly (played by Judith Light) comes to snuggle up with him on the couch. That’s when he asks to wear a pair of her panties.

Perhaps the most unique Jewish aspect of “Transparent” is how fully Rabbi Raquel, played by Kathryn Hahn, is portrayed — not just as a one dimensional rabbi figure, but also as a single woman longing to have a family and struggling to deal with the challenges of being a pulpit rabbi at the same time.

In “The Wilderness,” Josh goes to temple to see her. When he walks into the sanctuary she is sermonizing about the Torah portion Bamidbar, or The Wilderness, that only the Israelites born free of slavery would get to see the promised land. After the service she shows Josh around the building and opens a door to the temple’s un-renovated mikveh. They wind up sitting in the empty pool, with Raquel saying that she had gotten close to getting married but wasted her “last good years” with the wrong people and that her fertility is coming to an end. “Now I’ve just got crunchy, crispy, old lady eggs,” she says. Josh responds, “I’ll bet your eggs are super moist.”

The series confronts the tension between being a pulpit rabbi and a single woman. Raquel has gone to Josh’s apartment. “When you came in, I kinda thought you were going to have… you know,” he says, patting the top of his head. “It’s not stapled. I don’t staple it on my head. I didn’t want to throw you off with too much Jewiness on a first date,” she says. “I just want to sneak a peek. Just like a little bit,” he says, opening her purse to take it out. “Can I? Oh my God, look at this,” he says, unfolding the white crocheted kippah, as she blushes. “Okay, I’m going to do this,” he says as he places it on top of her head. “That’s right, it goes back,” she says, sliding it into place. “See, it’s not so sexy.”

Raquel squints and lifts it off her head. “Sexier.” She puts it back. “Not sexy.” She takes it off and puts it on a few times in a row. “Sexy, not sexy. Sexy, not sexy. Soooo sexy” she says, pulling it off. “It’s sexy, either way,” Josh earnestly says, while she appears embarrassed by her own delight. And they start kissing. Josh suddenly gets up and walks away, indicating that he’s having trouble below the belt. “My mentor talked about how sometimes rabbis, anybody, priests, people project all their God shit on you. I’m like a walking yarmulke and you can’t ever get a hard on,” Raquel says. “Oh it’s not you. My father is my mother right now and I’m in my head I’m basically afraid I’m never going to have a hard on, like ever.”

The show’s Jewiness comes out of Soloway’s own evolving engagement with Jewish life, said Soloway, who previously wrote for “Six Feet Under,” and whose father came out to her as transgender three years ago. She now refers to her as her “parent” and with the plural pronoun “they.”

“We came from Larry David Seinfeld-y ‘we are Jewish when it comes to food’ people,” she said of herself and her sister, comic singer-songwriter Faith Soloway (who pops up as a cantor at aforesaid dead second husband’s funeral). “My parents are the post-Holocaust generation… My mom came from parents who ran from pogroms. Nobody’s proud to be Jewish, nobody believes the tradition has anything to offer. It’s more ‘we’re not going to work on Yom Kippur because we have to but don’t really know why.’”

About a decade ago, Soloway went on retreat with Reboot, an organization that, in its own parlance, brings together “Jewishly unconnected cultural creatives.” It had a major impact on Soloway and led to her starting, with other Rebooters, a peripatetic congregation called East Side Jews, which gathers in the Silver Lake area of Los Angeles for reimagined Jewish rituals like Shabbat dinners and tashlich. Many of the writers on “Transparent” are people she met through Reboot, she said.

Soloway says that the show is a reflection of the people she knows, and the questions everyone deals with: “Am I going to temple, how long am I going to stay, does any of it matter, is any of it real?”

Amazon just ordered a second season of “Transparent” and Soloway says she is delighted that people are picking up on the series’ Jewiness, and hopes that viewers will continue to parse its layers of meaning. “I have a dream,” she said, “that there will be a class somewhere, ‘The Torah of Transparent.’”

Debra Nussbaum Cohen writes for Haaretz and is a contributing editor at the Forward.

How Jill Soloway Created ‘Transparent’ — the Jewiest Show Ever