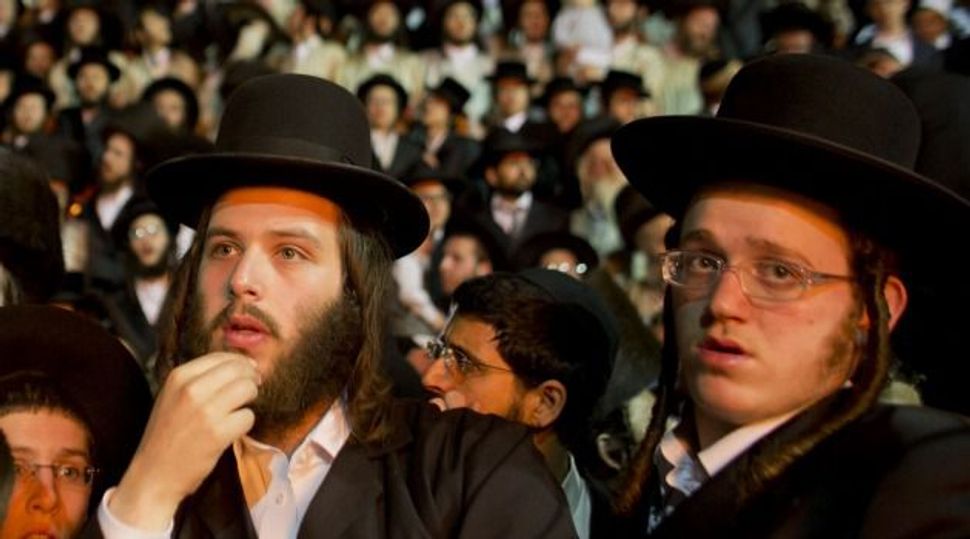 It’s a common enough idiom. Earlier this year, for example, it occurred in an article in the Forverts whose author, Emil Kalin, wrote that for most speakers of Yiddish and Hebrew, the literatures of these languages lign zey in der linker peye, lie in their left ear lock. Nor did I think it called for much explanation. If one were required to relinquish a part of one’s body, even those Jews who let their ear locks grow long as a matter of religious observance would sooner dispense with one of them than with an eye, ear or hand. What better way of saying one couldn’t care less about something than “It’s worth my left ear lock”?

But although that may be true enough, di linke peye, I recently discovered, has more esoteric origins. Before we get to them, a bit of background might be a good idea.

Yiddish peye (plural peyes) comes from biblical Hebrew pe’ah, which means a side or corner of something. Thus, for instance, the book of Exodus commands the farmer not to reap pe’at sadkha, “the corner of your field,” but rather to leave it for the poor. And by the same token, the book of Leviticus enjoins us, lo takifu pe’at roshkhem, “You shall not round the corners of your heads,” that is to say: “Don’t trim your hair short in the front in a semi-circle that runs above the ears.” From here comes the custom of growing one’s ear locks, the length of which serves some Jews as a casual yardstick — well, inch stick, anyway — of how pious one is.

And now back to the present. A while ago I was browsing in a late 16th- or early 17th-century Hebrew text called “Sha’ar ha-Gilgulim,” “The Gate of Transmigrations,” by Rabbi Hayyim Vital, a leading disciple of the renowned kabbalist Rabbi Isaac Luria Ashkenazi. In it is a passage comparing two giants of medieval Judaism, Maimonides or Rabbi Moshe ben Maimon (1135–1204), known by his initials as “the Rambam,” and Nachmanides or Rabbi Moshe ben Nachman (1194–1270), known as “the Ramban,” in respect of their interest in kabbalistic writings — which in the Ramban’s case was great and in the Rambam’s nil. Commenting on this, Vital wrote: “Indeed, the Rambam was from the left side [min ha-pe’ah ha-smolit] and did not have the privilege of being acquainted with the wisdom of the Zohar, whereas the Ramban was from the right side [min ha-pe’ah ha-yemanit] and was privileged.”

In actual fact, both the Rambam and the Ramban lived before the Zohar, the most revered of kabbalistic books, was composed at the end of the 13th century, but Vital believed, like all kabbalists, that the book was ancient, the divinely inspired work of the Mishnaic sage Shimon bar Yochai. What is of interest to us, in any case, is his use of the terms pe’ah smolit and pe’ah yemanit, “left side” and “right side,” which designate in kabbalistic literature the two fundamental aspects of Creation, God’s rigor and God’s mercy. The “left side” represents the realm of law, justice and retribution, the “right side” that of love, compassion and forgiveness. God is equally composed of both, but human souls have their roots in one or the other — and the soul of the rationalistically inclined Maimonides, according to Vital, came from the “left side,” whereas the soul of the mystically inclined Nachmanides came from the “right side.”

Of course, Vital was not being dismissive of Maimonides, for whom he had the greatest respect, if not as a philosopher then certainly as a halachic scholar. Yet ultimately, the “left side” of Creation, while an intrinsic part of it, is less sublime, as far as the kabbalists were concerned, than the “right side.” Although both are needed to keep the cosmos in balance, love is a higher attribute than law.

And here, it would seem, something amusing happened. Ordinary Jews in Yiddish-speaking Eastern Europe, like Jews elsewhere, were not familiar with kabbalistic literature, even if they were influenced, as Jews were everywhere, by kabbalistic beliefs. Hearing the phrase ha-pe’ah ha-smolit — in Yiddish, di linke peye — they understood peye to refer not to a side of Creation but to the ear locks that they grew. And since the left peye, so they were told, was of lesser merit than the right one, the expression ikh hob es in der linker peye, or es ligt mir in der linker peye, was born. Its kabbalistic history was forgotten, and all that remained was a popular idiom. It’s a long way from aspects of Creation to an ear lock, but not too long to be bridged by a misunderstanding that has given us a quaint figure of speech.