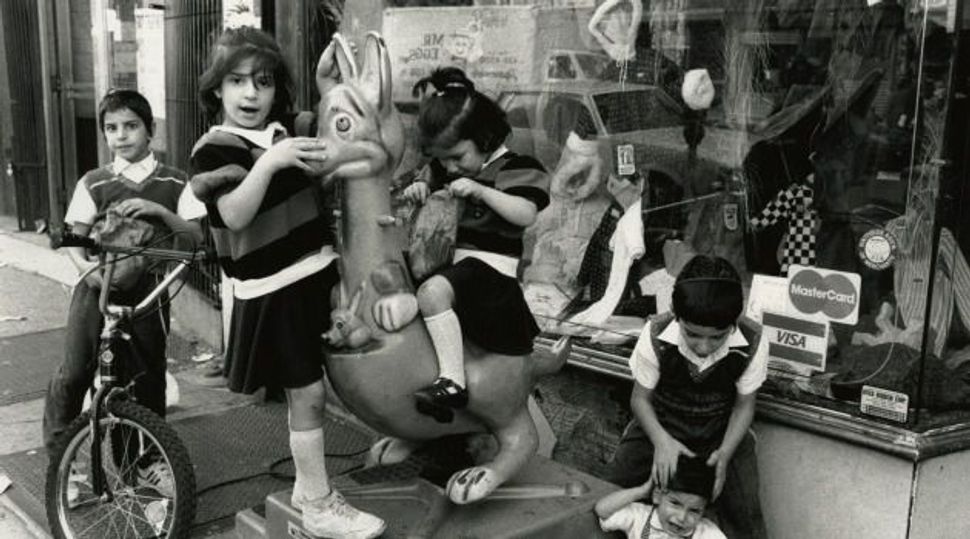 Time Transfixed: Che Nishio’s photographs were taken over the span of two years in the early 1990s. Image by Chie Nishio

Through February, the library is featuring a black and white photo exhibit depicting the life and rituals of Crown Heights’ Chabad Lubavitch hasidim.

The exhibit, entitled “The Hasidim of Crown Heights, Brooklyn; A Community Study” features photographs by 84-year-old Japanese photographer Chie Nishio over the span of two years in the early 1990s. The 40 photographs capture different moments in the lives of these ultra-Orthodox Jews.

The shots capture the emotion and detail of her subjects’ lives. Nishio “thoughtfully composed a documentation of daily life and ritual,” said Barbara Wang, the director of the exhibition.

The exhibit is displayed in three different parts of the library’s main floor, each of which is devoted to a different theme. A glass display case to the left of the library’s entrance exhibits photos depicting scenes from every Jewish holiday. Nishio’s shot of the Sukkot festival depicts the Lubavitcher Rebbe, Menachem Mendel Schneerson, handing honey cake to a child. The fact that Nishio, a woman, was able to capture this moment is particularly noteworthy because of gender norms within the Lubavitch community. “This was one of the times I could be at his [the Rebbe’s] level — women are always on the balcony,” Nishio said, her silver hair framing the sides of her face. “It was the first time I had the opportunity to take an up close up of him.”

On view in the display case just to the right of the entrance are photos of the Rebbe and of daily life and ritual at 770 Eastern Parkway, the address of Chabad’s world headquarters and main synagogue.

The exhibit’s third section, located in an alcove near the elevators, features photographs of major Jewish lifecycle events, including a brit milah, the traditional circumcision ceremony, a pidyon haben, the ritual redeeming of the first born, children learning Torah, a bar mitzvah, and a wedding, among others.

On the opening night of the exhibition, a few of Nishio’s subjects came to pay homage to the photographer and her work. Rabbi Motti Seligson, who is now the director of media relations for Chabad, spoke at the event, sharing memories of hosting Nishio in his home nearly three decades ago. Nishio photographed Seligson with a friend, dressed up for Purim.

Nishio said she became interested in Jewish communities because of her Jewish husband. “My husband is Jewish by birth,” she said. Though he never practiced, Nishio explained that she became interested in learning about the Jewish community. Nishio recalled that someone had told her to go to Williamsburg, a hub of ultra-Orthodox Jews, but that didn’t work out well at all. “They couldn’t understand me and I couldn’t understand them!” she said with a laugh. “They must have been thinking, ‘What is a Japanese woman doing here?’”

A friend recommended that Nishio check out Crown Heights. “Crown Heights was more open to strangers, they were more friendly,” she said. Chabad’s modus operandi is, in fact, to be warm and welcoming, and the group is known for its Jewish outreach efforts. “Many people invited me to their houses and I went.”

“Going in,” Nishio explained, “I had no idea what this was going to be.” Two years later, she walked out of Crown Heights with an array of photos documenting the daily life of the ultra-Orthodox sect.

“She really has an eye for the moment,” said Hanne Tierney, a member of the library’s exhibit selection committee. “I remember when we chose which works would be displayed in this exhibition — it was all anonymous — we all knew it had to be this one,” she said.

“Chie has an eye and she hones in on a moment and captures it,” said Tierney. “It’s an outsider’s perspective. That’s what makes it human.” And humanity in art, she added, is more important than capturing the culture: “That’s how we need to go, focus on the humanity, otherwise we’d have no hope.”

“The Hasidim of Crown Heights, Brooklyn; A Community Study” will be on display at the Brooklyn Public Library’s main branch in Grand Army Plaza until February 1, 2015.

Rachel Benaim is the Forward’s arts and culture intern.