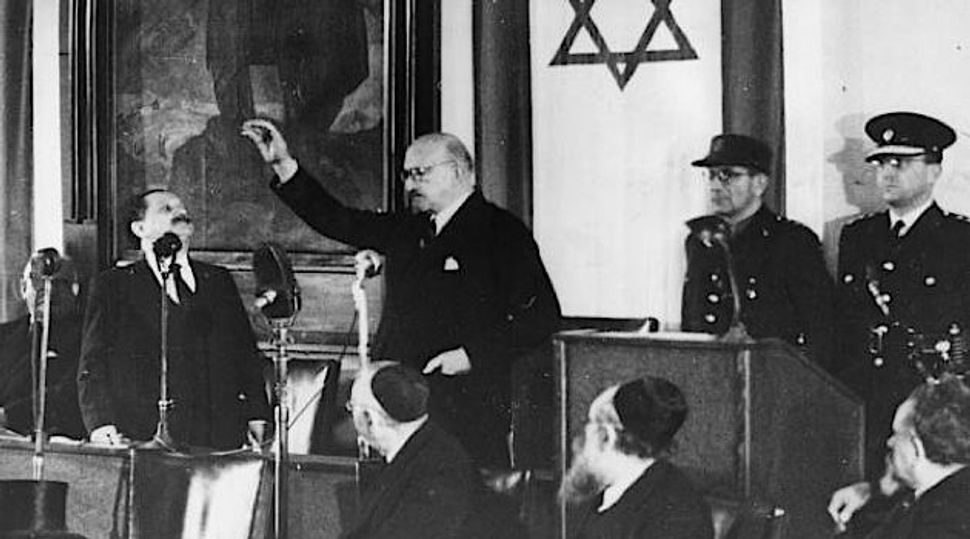 Monty Noam Penkower, in the latest of his fine works on the genesis of the State of Israel, examines in detail the history of 1930s Palestine. But counterintuitively, Penkower’s context for “Palestine in Turmoil: The Struggle for Sovereignty, 1933-1939” is not the history of the Yishuv — the Jewish community under the British Mandate — but something more immediate, more sinister, more percussive and shocking to Jews around the world at the time, and especially in Eretz Yisrael: the rise of Nazism. To Penkower, both international dangers and internal conflict lay at the root of, and culminated in, the Arab Revolt of 1936-1939, the deadly clash that entangled Jews, Arabs and the British.

One would think that Israel’s genesis should be, by this time, well-trodden terrain. David Vital’s encyclopedic volumes on the history of Zionism and Anita Shapira’s many works set the standard for “centrist” history. Tom Segev’s “One Palestine, Complete: Jews and Arabs Under the British Mandate” winningly tells the story of the Yishuv under the Mandate, as does A.J. Sherman’s “Mandate Days.”

But Monty Penkower’s two-volume work is the first that comprehensively explores the growing rift between the two peoples — and the fissures within the Arab and Jewish communities as well — against the backdrop of the rise of Nazism, the stance of the Arab states, and British realpolitik considerations. The first volume, on the events of 1933-1936, develops the historical and political context for the Revolt. The second volume carries the story into the crucial years of the Arab Revolt itself, 1937-1939.

“Palestine in Turmoil” lucidly tells the story of the widening gulf between Arabs and Jews in 1930s Palestine. The fault lines between Arabs and Jews had been apparent from the first settling of Jews in Palestine in the late 19th century (this reader would have welcomed some context on the early history of the Yishuv), and deepened with the anti-Jewish riots of 1920 and 1929. These fault lines became fissures, and subsequently rifts, in the years 1933-1939. Penkower’s thesis is that the rifts proved to be irreconcilable once the leadership of both peoples refused to accept minority status in Palestine.

Penkower deftly walks the reader through the seemingly endless negotiations amongst the three parties in Palestine, and — crucial to the narrative — through the internal divisions within each group.

Immigration was the overriding issue for Jews and Arabs, and for the British, who controlled immigration. The Yishuv leadership took to heart the principle established early on by the visionary early architect of the Yishuv Arthur Ruppin: Without immigration there would be no hope for the Zionist enterprise. Ruppin’s second principle — without land, Zionism would collapse — informed land purchase, which therefore became the central activity of the Yishuv.

And what was land all about? For Arab landowners, whatever the benefits financially, land was about being part of the political power structure. For Jews in the Yishuv, acquisition of land had nothing to do with attaining power in the existing system; the goal was the creation of a state. This point, underscored by Penkower, reflected an important dynamic in the early settlement under the Turks, which continued after WWI in the Mandate.

Who were the players in Penkower’s drama? Mapai leader David Ben-Gurion, the Socialist Labor Zionist grand poobah of the Histadrut labor federation, was key, to be sure. Zionist leader Chaim Weizmann played a central role in negotiations with the British. The Mufti, Haj Amin al-Husseini, is everyone’s favorite villain, but al-Husseini is important to remember in the context of the tribal rivalries and struggles — among the Husseinis, the Khalidis, the Nashashibis — that informed Arab politics in Palestine and thereby the Revolt.

But central casting had others in mind. Chaim Arlosoroff, the Mapai and Jewish Agency leader who was murdered in 1927 and whose death polarized the Yishuv; Arthur Wauchope, British high commissioner for Palestine, empathetic toward Jewish interests; Mapai official Moshe Shertok (later Sharett), who was an important player in the 1930s and after. One figure who is not given his due in “Palestine in Turmoil” is George Antonius, a most prominent Jerusalem Christian Arab, and one of the first historians of Arab nationalism. In his watershed “The Arab Awakening,” Antonius analyzed the Arab Revolt in WWI and the chicanery of post-WWI boundary designations from the Arab perspective. More than the mere mention of Antonius would have been welcome.

And while Penkower presents a comprehensive historical context for the Arab revolt, important events are lost in the book’s morass of data; Penkower sometimes forgets to connect the dots. The numerous references to the 1931 “MacDonald Letter” suggest that the document was of significance — and indeed it was. But what was the “Letter”? In 1931, British Prime Minister Ramsay MacDonald stated that the Zionist undertaking in the Mandate was not confined to the Jewish population of Palestine but to the entire Jewish people. In addition, countering a previous white paper that eroded, indeed negated, the promises of the Balfour Declaration, the letter reinforced the British obligation to encourage Jewish settlement in and immigration to Palestine. The publication of the “MacDonald Letter” was a central event leading to the Arab Revolt. One wouldn’t know this from the book’s disjointed references to it.

And there is Arthur Ruppin, also given short shrift by Penkower. Ruppin, barely remembered today except on street signs in Israeli cities, was the first (together with Zionist leader Berl Katznelson) to conceive of the idea of a new settlement model, the kvutzah (thence the kibbutz), the collective settlement. More to the point, Arthur Ruppin was the first to insist that large numbers of Jewish immigrants would be necessary to fuel the Zionist enterprise, and that the Zionists needed to settle as much land as possible as quickly as they could. These ideas, “no-brainers” today, were radical in their time, but became the realities that led to the Arab Revolt.

Despite these issues, “Palestine in Turmoil” makes a substantial contribution to history of 1930s Palestine Scholars and students will benefit from Penkower’s clear narrative and his prodigious archival research, and just plain folks — many of us had our unfortunate early education about Palestine from the blockbuster novel and movie “Exodus” — will learn about an era that is central to our understanding of how the Arab-Israeli conflict came to be.

Jerome Chanes is the author of four books on Jewish history and public affairs. He is a senior fellow at the Center for Jewish Studies, CUNY Graduate Center.