Utopian Dream of Israel Dies in ‘Salt of the Earth’ 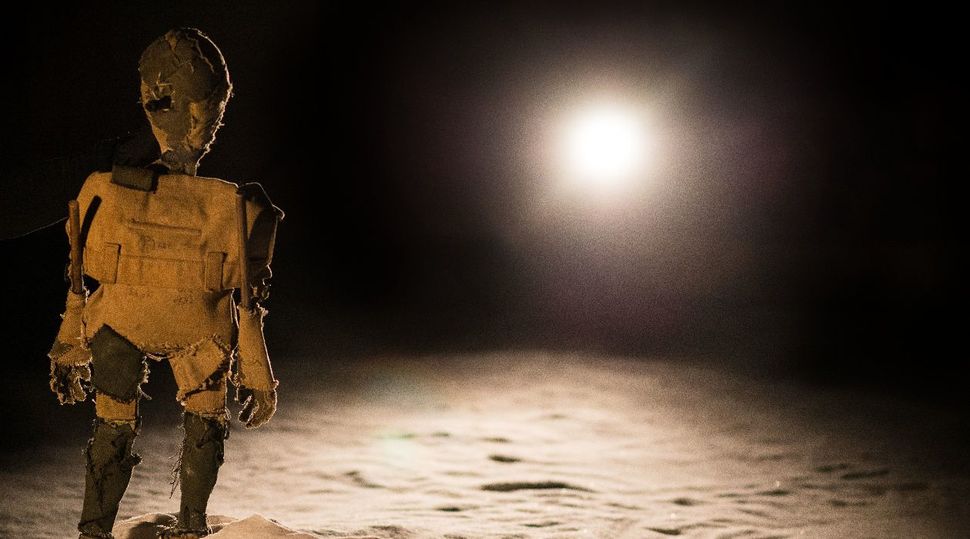 Light at the End of the Road: ‘Salt of the Earth’ is based on Amos Kenan’s novel ‘The Road to Ein Herod.’ Image by Yair Meyuhas

Some sand, some buckets, a few brooms, some paper cut outs, a handful of toy cars, trucks and tanks, a kieg light, a video camera hooked up to a live feed, and a single puppet. This is all Zvi Sahar and his Puppet/Cinema team of precision performers require to tell a story that encompasses all of Israeli history.

Here’s how it works:

Pour the sand into a pile and you’ve got a mountain. Dig into one side of this mountain, throwing the sand into small piles nearby and you’ve got a mountain range complete with valleys and peaks. Place the puppet on its chest atop the mountain, aim the camera at it and turn on the live feed, and there on the screen above the stage, you’ve got a person crawling through the desert, parched, delirious, halfway to death. Throw the sand thinly across the floor and then run a broom through it, set up some strategically placed cut outs, frame all this just right in the camera and you can create an entire cityscape.

The story they’re bringing to life with these tricks is based on Amos Kenan’s explicitly political novel “The Road to Ein Herod.” Part allegory, part dystopian noir, the story follows a nameless narrator (here played by Sahar, and at times the puppet) who discovers that a military coup has occurred in his country, and after killing two soldiers who have come knocking at his door, flees Tel Aviv in hopes of making it past a place called Armageddon to a utopian socialist dream kibbutz named Ein Herod.

Along the way, he witnesses atrocities of various sorts. And though the narrator’s comments make clear that there’s enough ancient blame to go around, the specific blame for the horrors depicted on stage fall overwhelmingly on the Israelis —specifically the military, but also the complacent (thus complicit) members of the society and even the nameless idealistic hero who, once he’s started on his road toward Ein Harod, commits his own crimes trying to get there.

“Salt of the Earth,” like the book that it’s based on, offers a rare and much needed perspective on the state of Israel and the land over which it presides. It’s a work of art made by an Israeli citizen that acknowledges the true historical facts of the place. It presents the Jews as one among many Semitic and Arab tribes — from the Canaanites to the Hittites and more — that over the millennium have, with equal claim, occupied this patch of earth. Without equivocation, it recognizes the crimes against the Palestinian people that the Israeli Government has perpetrated since 1948. It doesn’t succumb to the teary liberal position by which feeling bad about what’s going on somehow lessens one’s culpability and the impotent wish for “everyone to just get along,” drowns the political truth in a sea of empathy and self-pity.

What I mean is that “Salt of the Earth” is a tough little piece of theater, and in the current climate, a brave one. It unsettles. It presents a vision of hope diminished, a hope for people, both Jewish and Arab, living as equals, partaking in a communal connection to the land that transcends their individual desire to own it — the old kibbutznik dream, dead and gone forever, nihilistically obliterated by the settlers on the far side of Armageddon.

Utopian Dream of Israel Dies in ‘Salt of the Earth’