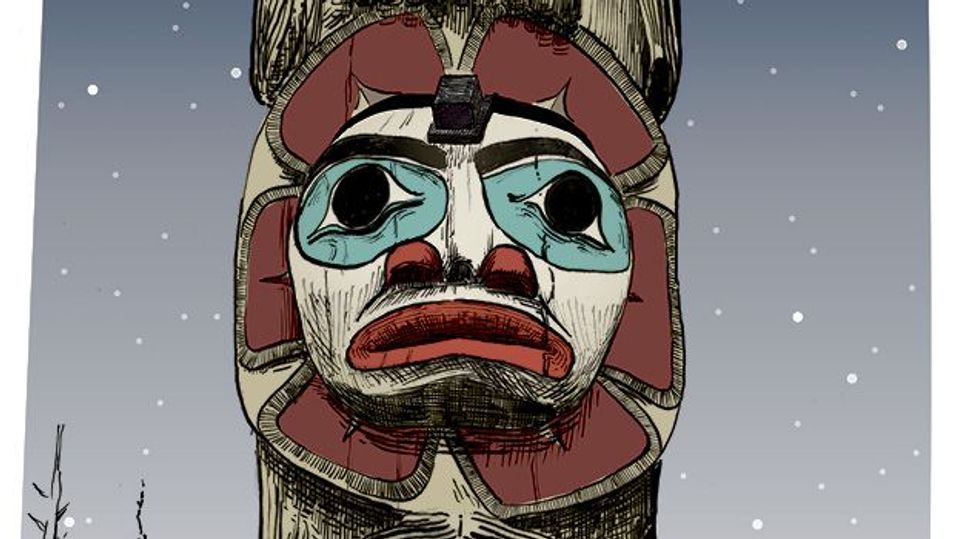 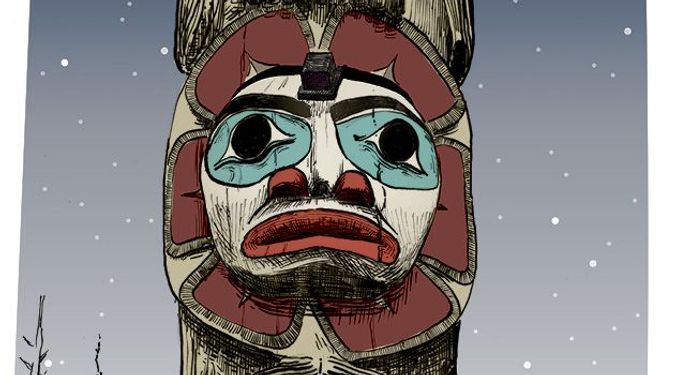 In the remote villages of rural “Bush” Alaska — a vast region neither accessible by road nor connected to the ferry system — not only do indigenous people still rely on subsistence foods, but sharing these foods also holds significant cultural importance, especially in forging new friendships.

“The problem is whale, seal, shellfish (obviously), even caribou — none of it’s kosher,” said tribal judge David Avraham Voluck, a man whose job entails puddle-jumping all over the state, sometimes to within 500 miles of Siberia. “But in Alaska, Baruch HaShem, there’s always salmon and halibut.”

This leads to the obvious question: How does a nice Jewish boy from the suburbs of Philadelphia wind up in such far-flung northern locales that during the summer he can’t make Havdalah until the sun finally “sets” at 3 a.m.?

“That’s a big question, with many threads,” Voluck, 44, recently told me.

“So, there are two ‘weird’ things about David Voluck,” he continued, laughing impishly, as is his habit. “Well, probably more than two, but two really weird things. First, I’m an observant Jew, which is not commonplace in Alaska. I’m also a tribal judge, the state’s only non-Native tribal judge — at least that I know of.” 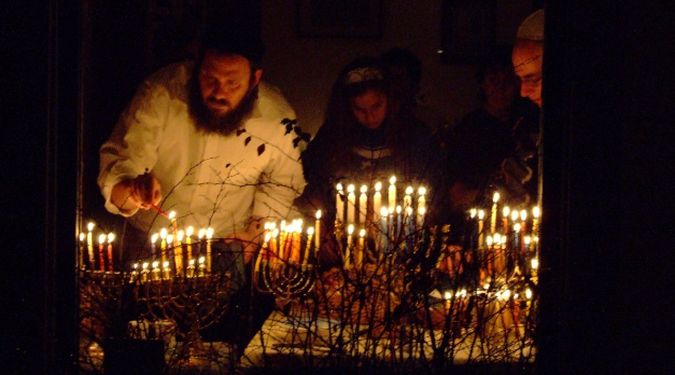 Indeed, Voluck stands as one of the country’s foremost authorities on the subject of Alaska Native tribal law — an author of “Alaska Natives and American Laws 2nd and 3rd Edition,” he literally wrote the book on it (well, co-wrote). In addition to maintaining a small legal practice and an adjunct faculty position at Northwestern School of Law at Lewis & Clark College in Portland, Oregon, Voluck currently presides over the Tlingit (pronounced “Clink-get”) & Haida tribal court in southeast Alaska and the Aleut community tribal court of St. Paul in the Pribilof Islands. He has also worked with the Athabasca, Inupiat, Alutiiq and Yupik tribes and is currently helping to establish a tribal court on Kodiak Island.

Voluck, who has three children — Nechama Chaya, 11, Yehuda Dov Ber, 8, and Emunah Golda, 5 — splits his time between Sitka, Juneau, Seattle and any one of the many isolated communities dotting the Alaskan wilderness. (How isolated? Some Bush villages don’t even have running water.)

“My family’s based in Seattle,” said Voluck, who has taken to helping his kids with homework via Skype and traveling with prayer books, candles and other essential Judaica in his carry-on. “But I fly around so much, I’m not sure I, myself, have a home base anymore. Good thing the Jews created such a mobile religion.”

By chance Voluck’s overcrowded schedule placed him in Juneau — the state capital, a city of about 30,000 in the Alaska Panhandle — long enough for me to invite him over for dinner one evening (salmon, rice and salad, nice and pareve, served on paper plates with plastic utensils). But first, we’d met for an after-hours peek at the Tlingit & Haida tribal court, located in the Tlingit & Haida Central Council’s main headquarters, a small one-story house indistinct from all the others in the neighborhood except for the huge bronze statue of an Alaska Native veteran patrolling the yard.

The United States legal system is unique in that it encompasses three separate sovereigns: the federal government, the 50 individual states and each tribe within that state. In Alaska, “Indians” comprise nearly 15% of the total population, compared to 1.2% of the U.S. as a whole. In Bush Alaska that number can exceed 90%. And each tribe exists as its own nation.

Naturally, many different types of cases appear before Judge Voluck’s bench. Alaska tribal courts enjoy what’s known as “concurrent civil jurisdiction,” involving civil cases that could conceivably be heard by state or federal courts. Here, tribal courts have no police force or jails — unlike some in the Lower 48 — but do offer diversion court for criminal cases and impose alternative sentencing for lesser offenses (such as underage drinking or disorderly conduct). This might entail education, mentorships, volunteer work or other community service — in some instances, Voluck’s rulings have entailed chopping wood and shoveling snow.

“Alaska’s tribal courts primarily focus on the family — guardianship, adoptions, custody, divorce and children-in-need-of-aid cases,” he said. “After all, what is a tribe, really, but a large extended family?”

The Tlingit-Haida tribal court feels more like a meeting place than a courtroom, filled with soft light and Native artwork. What especially caught my eye: a collection of objects at the center of the conference table, arranged like some kind of aboriginal Seder plate.

“This room sees lots of very… let’s call them intense situations,” Voluck said when I asked about the centerpiece. Turns out it wasn’t a tribal tradition, but Voluck’s own idea.

“People find comfort in the familiar. So I laid out some objects culturally relevant to the people of Southeast Alaska: seaweed, cedar bark, sage, an eagle feather, a raven feather — you always need balance between Eagle and Raven,” he said, referring to the two Tlingit “moieties,” or “descent groups.”

Okay, but what’s that shiny horn that looks like a shofar?

“That’s a shofar,” he said, laughing. “You’re supposed to blow it the whole month leading up to Rosh Hashanah. Come Elul, I like to blow my shofar here in the office randomly without warning, just to surprise the admin staff.”

Later, after several helpings of salmon — “when I’m traveling, I eat a lot of P B & J; this is much better” — and a pre-bedtime shofar demo for my children, we retired to my home office, where Voluck resumed our conversation about his improbable life path.

“Like most Jewish stories, it starts with a king,” he said, sipping from a glass of vodka.

This king, restless within the palace walls, sneaks through the gate dressed in peasant clothes and wanders way out into the countryside. He comes upon a shepherd playing the most hauntingly beautiful music he’s ever heard. Mesmerized, the king sits and listens for hours until sunset forces him to return to the palace — but he can’t get the music out of his head. No musician in the land can recreate it. The king lives out the remainder of his days driven by the mad pursuit of this music.

“It’s definitely not a Disney ending,” said Voluck. “But what does this story teach us? As Jewish people, our souls are on fire. We are that king’s descendants. This shepherd’s song is woven into our genetic memory. We spend our lives just as he did, desperately trying to hear it again.”

Raised in a Conservative “but not terribly religious” household, Voluck graduated from the University of Pennsylvania in 1992, with a B.A. in sociology of religion, before studying environmental law at Lewis and Clark Law School. He soon threw himself headlong into environmentalism.

“There I was, demonstrating, hugging trees, chaining myself to bulldozers. But I could see I didn’t have the same fire as everyone else. In other words, this wasn’t the song I was looking for.”

Then, a friend recruited him for a legal internship representing the Tlingit & Haida in Sitka. As the tribe’s legal counsel, Voluck found he’d stumbled upon the human, cultural and spiritual side of environmentalism.

“Now, I started hearing the song,” he said. “From then on, Indian law became my obsession.”

Through his burgeoning relationship with Alaska Native populations, Voluck also began sensing parallels between their culture and his own. Every day, he told me, one tribal elder in particular would visit him, “and every day, he’d say the same thing: ‘David, our culture, our language, our heritage is very important; you must help us.’”

“Around the same time, a spiritual old woman wanted to adopt me,” Voluck continued. “Her son, also named David, had drowned in an accident and she felt I was his gilgul, his reincarnation. A few weeks before the adoption ceremony, the woman had a dream. In the dream, her son appeared before her and told her she couldn’t give me a Tlingit name; I was from my own tribe.”

Again, the elder’s words echoed in Voluck’s head: our culture, our language, our heritage is very important; you must help us.

“Here I was, fighting to preserve Alaska Native tradition — who was fighting for my people’s tradition?” Voluck said.

Now he had a second obsession: reclaiming his own Jewish heritage.

Fueled by his growing devotion to the Lubavitcher hasidic movement, Voluck took a two-year sabbatical from law to attend the Rabbinical College of America, in Morristown, New Jersey, specializing in — what else? — Talmudic and Jewish legal studies.

When Voluck returned to Sitka — with a wife and young family in tow — to continue practicing Indian law, “they totally welcomed me back; the first day I walked in with the beard, the peyes, the kippah and nobody even blinked.”

In a sense, the Voluck home in Sitka became a makeshift Southeast Alaskan Chabad — they were the only Hasidim for literally thousands of miles. They welcomed Jews (there are about 40 in Sitka, compared to 1,500 Natives) and non-Jews alike for Shabbat dinner and discussion groups. The Volucks once hosted Michael Chabon, who’d just written “The Yiddish Policeman’s Union,” in which Sitka plays a central role as the setting for a fictional Jewish homeland after World War II.

“They get that we’re tribal, we get that they’re tribal — that makes us all mishpokhe,” he said of Alaska Natives. “But of course, there’s a strange connection between Indians and Jews, and it goes way back.”

In fact, Voluck explained, the earliest known advocate for Native American rights was a 16th-century Spanish historian, social reformer and Dominican friar named Bartolome de las Casas. De las Casas was also a converso, who, like many Jews, escaped the Inquisition by immigrating to the New World. Appalled at the conquistadors’ harsh treatment of the indigenous peoples, de las Casas appealed extensively on their behalf to the royal court of Spain, eventually earning him the official title “Protector of the Indians.”

“It’s the Bible of Indian law,” said Voluck. “Go into any tribal lawyer’s office and ask for a ‘Cohen’ and they’ll know exactly what you mean.”

Of course, you can’t expect the residents of places where dog sleds are still used for transportation and “honey buckets” replace toilets to be equally well versed in their Cohen. Surely, Voluck’s appearance provokes some sort of reaction?

“For one, I’m kind of a ‘goofamapotamus,’ so people tend to see that before the yarmulke or the tzitzit,” he said. Admittedly, he also “tones down the down the garb” when he’s in Alaska, but still dons the black hat and suit on Friday nights and Saturdays.

“Plus, remember, many of these villages were missionized by Russian Orthodox priests; I sort of look like those guys. In fact, a young man at a gas station once called me ‘Father’ and started confessing to me. I took his confession — what else was I going to do?”

And while practicing Judaism as a traveling circuit judge in one of the least inhabited regions on earth remains challenging, Voluck seems determined to continue what he considers his singular contribution to tikkun olam.

Geoff Kirsch is a journalist and comedy writer based in Juneau, Alaska.