Could This Be Year of the Jewish Woman? 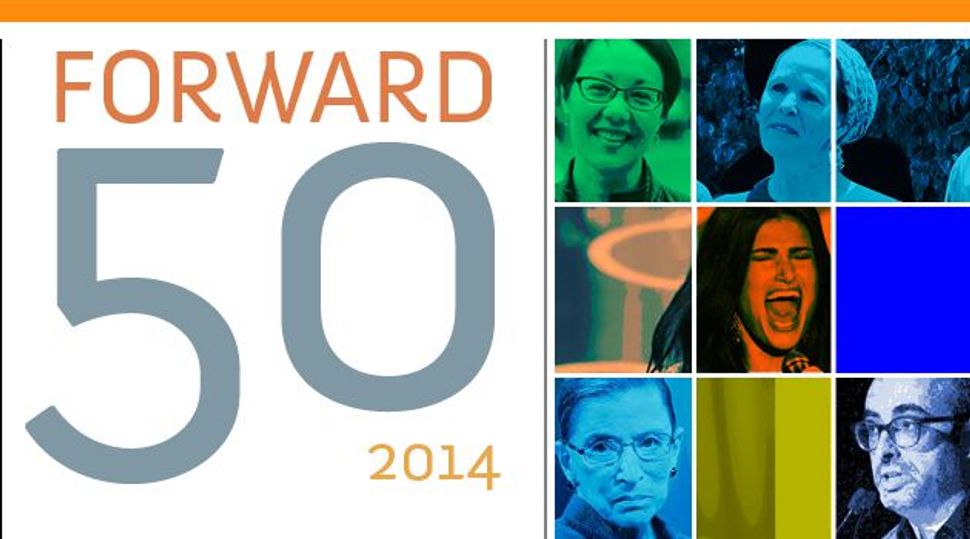 Never in the 20 years that the Forward has published its list of the 50 American Jews who have had the most impact on our national story has the number of women been this high — 26 in all, including four of the top five.

Even we were surprised at the final tally. While women have yet to be accepted (and paid) on an equal footing with men in organized Jewish communal life, they are taking leading roles in influencing national policy, cultural norms, religious practice, literature, political advocacy, the performing arts and the ever-fraught conversation about Israel.

The effect on our society is broad and growing deeper. On this list is everyone from Idina Menzel, an actress whose song in “Frozen” has joyously found its way into the minds of every young girl, to Justice Ruth Bader Ginsburg, whose scathing U.S. Supreme Court opinions have given her such a cult following that there are now Twitter hashtags and Tumblrs in her honor.

This year, sadly, we once again include women who suffered the loss of their children — one in a kidnapping and murder that made international headlines, another in a tragic accident that scarred a Brooklyn community — and who, by their responses, taught us how to grieve with dignity and purpose.

Reflecting the mood of the country, this year’s list is light on politicians; reflecting shifts among American Jews. It is also light on traditional communal leaders. Instead, the national conversation was inspired by those who are creating new films and museum exhibits, and innovative restaurants and entrepreneurial ventures. And we also applaud those who breathe fresh life into conventional institutions: a federation leader in Denver, a legislator in New Jersey and, of course, the irrepressible face of the most iconic Jewish store anywhere. (That would be Zabar’s.)

As always, the Forward 50 represents the judgment, values and sensibilities of the men and women in our newsroom who compile and research these profiles. It is a unique enterprise. While we follow our own rules about including only living citizens, there are times to break those rules — and this year is one of them. We choose to honor the late Steven Sotloff, whose brave work in the Middle EAst was informed by his heritage and his integrity. Sotloff kept his faith as a journalist and as a Jew until the horrific end of his life. This issue of the Forward 50 is dedicated to his memory.

Could This Be Year of the Jewish Woman?