Why Jewish Charities’ Tax Filings Are One Huge Mess 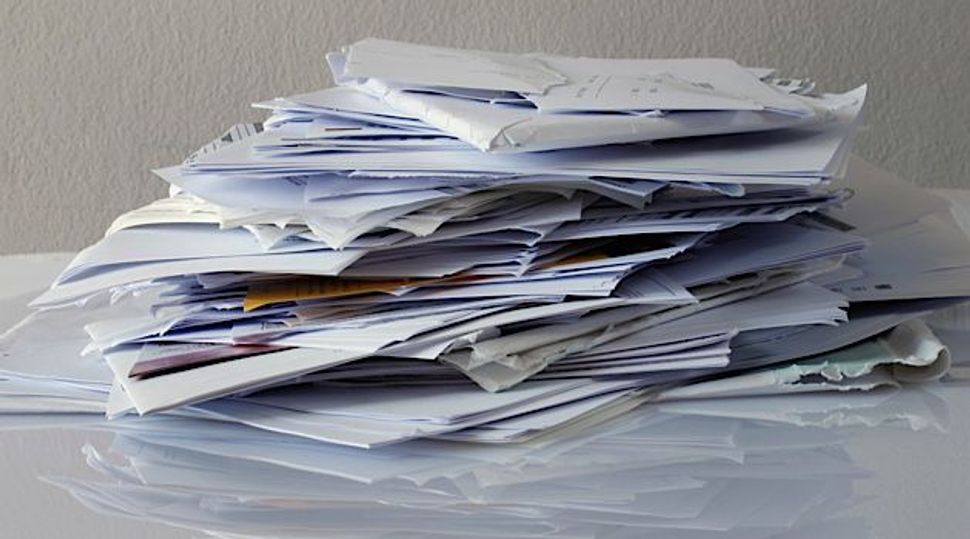 Useless Data? The IRS issues only light penalties for mistakes on the Form 990, since they’re not taxing the organizations either way. Image by Thinkstock

This was supposed to be a story about the money that Jewish charities spend on outside lobbyists.

That’s something you’d like to know, right? How the $26 billion Jewish charity industry uses its massive financial resources to influence government, and how much it’s paying to do it?

Turns out I can’t tell you. That’s because the tax returns that charities file are a huge mess. So instead, this is a story about charities making themselves unaccountable by filling out their tax forms incorrectly.

Here’s the basic premise of charity accountability: In return for not paying taxes, charities file detailed public financial statements that get posted online. Donors can check how the charities are spending their money, journalists can snoop for stories, and charity employees or donors can see how much the top executives of the charities make.

All that works only if the numbers are right.

It used to be that when you visited the website of GuideStar, the not-for-profit that collects these tax forms from the IRS and puts them on the Internet, you would find a lot of forms filled out by hand, looking like homework a sixth-grader finished on the school bus. They didn’t inspire a ton of trust.

Nowadays, though, nearly all the filings are computerized. Even better, since last year, the IRS has started posting structured data sets culled from the filings. After some fiddling, you can sort the data in all kinds of ways, summing and ranking and filtering. There’s a ton of data, and it all looks pretty clean.

So, a few months ago, I published a big investigative series using those structured data sets. I figured out how to isolate data from 3,600 Jewish charities, and I analyzed their filings.

Here’s what happened: A few weeks ago, an editor here asked me to update my series. The IRS had released a new data set of charitable tax returns filed in the 2013 calendar year, and the editor wanted me to compare that with our findings for the 2012 calendar year.

I was interested, though, in some of the data the IRS digitized for 2013 that had been missing from the 2012 release. In one new field, each group reported the amount they spent on outside lobbying firms. That seemed interesting: Tax-exempt groups are allowed to engage in some lobbying, and we know from our reporting that many Jewish organizations have a significant presence in Congress and in statehouses. If Jewish groups are hiring professional lobbying firms to help gain access to lawmakers and impact legislation, it would be important to know how much they’re spending.

I sorted the list of Jewish groups by the amount spent on outside lobbyists. Four charities popped to the top: the Anti-Defamation League, the American Jewish World Service, Yeshiva University and the Jewish Federation of Greater Pittsburgh.

I put out some phone calls. First to get back to me was the ADL. Oops, they said. That $529,000 number actually reflected the value of staff time spent on lobbying. They actually spent no money on outside lobbyists. The staff time figure belongs on Schedule C, a part of the Form 990 that the IRS didn’t include in their data set. Part IX, Line 11d on their form should have read $0.

Next came AJWS. They told me that $46,000 of their $373,000 was for staff lobbying time. I asked why, then, they had reported spending $373,000 on outside lobbyists. They sent me a statement: “In reporting to the IRS and the public, we included more information than the IRS required on this form, making it completely consistent with other significant IRS reporting requirements, so that we could provide a full and consistent picture of our advocacy activities to influence U.S. government policy to help end poverty and defend human rights in the developing world.”

That’s two out of four that filled out the form wrong.

The Pittsburgh federation came next. They said that they hire an outside consultant to do work in Harrisburg, but that only a small fraction of the $266,000 they reported went to him. The rest was for staff time.

Three out of four.

Yeshiva University did not respond to an email about the $334,000 they reported spending on outside lobbyists.

So what was going on here? Why couldn’t these big organizations and their fancy accountants get their filings right?

There’s no denying that the Form 990 is complicated. “If you look at the 990 itself and see how many pages it is without the schedules, you’re talking 12 pages of stuff,” said Bryan Pautsch, who heads the not-for-profit tax services practice at Sikich LLP, a big Midwestern accounting firm. “You look at the instructions on just the 990, and you’re at page what, 95?”

Still, these aren’t Podunk charities, and the people filling out these forms are supposedly pros: The ADL took in $50 million in contributions in 2012. Their tax filing was signed off by Daniel Romano, the partner-in-charge of the not-for-profit tax practice at Grant Thornton, part of a massive multinational accounting firm with 38,000 employees.

Romano, when I called him, said that the form was actually filled out in-house by the ADL, and that his firm just reviews it.

So why was Line 11d such a disaster? Was it just that line? Or had I stumbled on something larger? I called Marcus Owens, former director of the Exempt Organizations Division of the IRS, which oversees not-for-profits, and told him my problem. He was not surprised.

Owens recalled an internal IRS training document published in 2002 and still available online that addressed the issue: “It is widely acknowledged that many Form 990a contain significant errors or omissions,” it read.

Here’s why mistakes matter: Last year, as the scandal at the Metropolitan Council on Jewish Poverty piled on top of the 92nd Street Y scandal and the YU scandal, we examined some of the country’s largest Jewish charities and found serious structural weaknesses. The men (yes, they’re almost all men) who run the nation’s largest Jewish charities commonly keep their jobs for 20 years, long enough to dominate the trustees who are theoretically their bosses. It’s a common situation at big Jewish charities, and one that experts told us was not conducive to good charity governance. If American Jewish charities are bad at catching their own wrongdoing, the onus is on watchdogs, journalists and donors to keep a close eye. That’s hard to do when the Form 990s are full of bad data.

The 2002 IRS training document goes on to quote studies that found that mistakes in charity filings are unbelievably widespread: 20% of Form 990s have arithmetical mistakes, 10% list the wrong tax year and 15% that filed the shorter 990-EZ should have filed the longer 990.

Owens said that he expected the error rate today is higher than it was when the training document was written, as the form grew longer in 2008.

I kept looking. It turns out that the IRS’s internal research division has spent a lot of time complaining about the poor quality of 990s. An IRS report from 2005 examined charities that had filed both a Form 990 and another form called a Form 990-T that reports taxable business income, and found that the figures reported on the two forms filed by the same group in the same year could not be reconciled with each other nearly 40% of the time.

“In some observed cases, the Form 990 amounts simply did not correspond to any Form 990-T amounts,” the researchers wrote. That’s IRS-speak for: “What the hell, guys.”

Part of the problem, Owens told me, is that it’s impossible for the IRS to catch these mistakes. “[There’s] no way to catch errors without a human being actually pulling the return and looking at it,” Owens said. “That’s beyond the capability of the agency on anything like a systematic basis.”

The IRS researchers who wrote the 2005 report had another explanation. In their study, they found that the 990-T had higher accuracy rates than the 990. That might be because it doesn’t matter if you get things wrong on the 990.

“[T]he purpose of Form 990-T is to calculate tax liability, which carries a greater potential for the assessment of monetary penalties for misreporting than Form 990, whose purpose is to supply information only,” the researchers wrote.

In other words, the IRS doesn’t much care whether you get the 990 right, since they’re not taxing you either way. The charities, therefore, don’t care much either.

Those rules have changed a bit since 2005, but the penalties are still light — no more than $50,000 for an organization and no more than $5,000 for a responsible individual.

Without serious penalties for mistakes, and without anyone really checking, it’s no wonder the 990s are full of mistakes.

I wasn’t entirely surprised. In my earlier series, I had avoided relying on the columns in Part IX of the 990 where charities break down each expense line into amounts spent on program services, management and fundraising. Those distinctions are easily fudged, and I had been warned that they didn’t mean much.

Still, this was different: Not a slight bulking up of one vague category over another, but bad numbers with no actual bearing in reality.

None of the groups that entered the incorrect professional lobbying fees data seemed to be hiding anything. It’s a minor mistake, as 990 errors go. Yet these minor mistakes erode confidence in the 990. If I can’t trust the field I did check, I wonder if I can trust the hundreds of other fields I didn’t.

Why Jewish Charities’ Tax Filings Are One Huge Mess