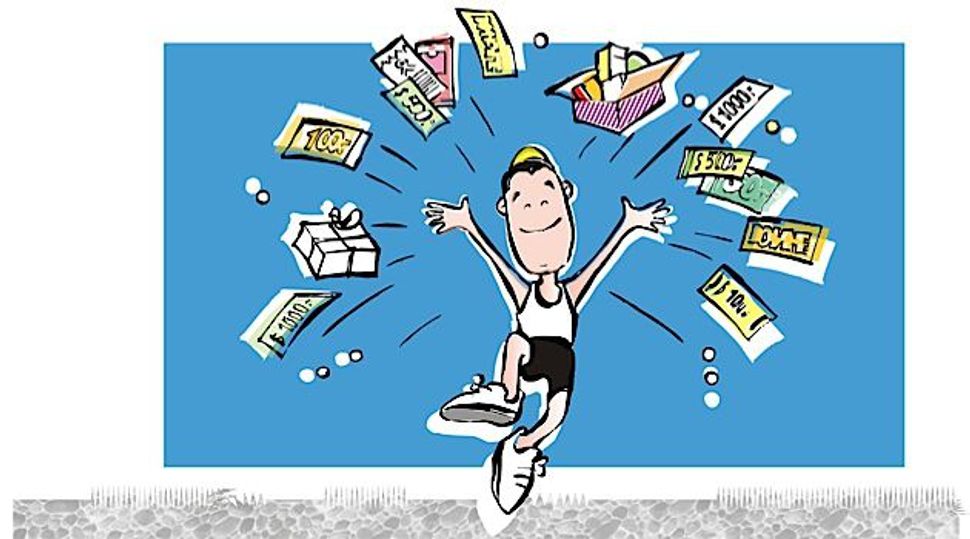 You’d think that despair and anger about social injustice, deadly diseases and natural calamities would be the primary drivers for donations to charity. But these feelings only represent half of the story. While it is true that we are more likely to give if we are aware of needs (increased media coverage about earthquakes, for example, leads to more donations to relief efforts, studies have shown), it turns out that our own well-being plays a role as well.

Giving makes us feel good — a phenomenon that has been labeled “empathic joy,” “warm glow” or “joy of giving.” Studies using functional magnetic resonance imaging have found that the same area of the brain, the mesolimbic network, is activated when test subjects donate to charity as when they receive monetary prizes themselves. The mesolimbic system regulates the reinforcement of rewards — and is also activated by food and sex.

Giving to charity seems to make humans feel good across the world: Lara Aknin of Simon Fraser University in Vancouver, Canada, and colleagues compared the relationship between prosocial spending and happiness in 136 countries. They found a positive correlation in a vast majority (120) of them, when they took demographic factors such as income into account.

The connection between happiness and giving works the other way around as well. When people make frivolous, pleasure-oriented purchases, for things such as candy, they are more likely to make a charitable donation than when they buy useful products, such as stationery, one study by two marketing professors, Michal Strahilevitz, who is now at Golden Gate University in San Francisco, and John Myers of the University of California, Berkeley, showed. They gave out different coupons to students: cash rebates at a (“frivolous”) candy shop or at a (“practical”) stationery store, or coupons with a donation-for-charity incentive at either store (“we will donate 50 cents for every dollar you spend”).

They found that more students redeemed the cash rebate at the practical store than at the candy store — while the donation-to-charity incentive led to a higher redemption rate at the sweet shop. The explanation: The combination of pleasure and guilt we derive from a luxurious purchase seems to leave us feeling unsettled — so we seek out the “warm glow” we associate with charitable giving.

Run to cure cancer, cycle to combat Parkinson’s, walk to fight arthritis.… If the list of what social scientists call “endurance events” is long, that’s because, in recent years, more and more people have been participating in walks, runs, bicycle rides and other sporting events organized by charitable organizations. For example, the March for Babies (formerly WalkAmerica), the nation’s oldest charitable walking event, had 1,000 participants in 1970 and three million participants in 2014.

People choose to suffer for a cause when they could make the same contribution without doing so, writes Christopher Olivola, an assistant professor in marketing at Carnegie Mellon University and editor of the book “The Science of Giving.” He calls this the “martyrdom effect:” An experiment showed that people donated more if the hypothetical fundraising event was arduous (running a marathon) rather than enjoyable (attending a picnic). However, Olivola cautions, such special events are more costly for charities than regular fundraisers — and even calories burnt by the participants could be put to better use, at least from an economic perspective: One could spend the same amount of time working, and then donate the wages.

But, because people derive meaning and value from suffering and working hard, this act of sacrifice makes the donation feel more “special,” Olivola writes. Therefore, in order to be the most effective philanthropist, Olivola suggests participating in activities that are both challenging and useful, such as planting trees.

From Gandhi’s weeklong fasts protesting colonialism to the kid who lifted the car which had trapped his father underneath, we’ve all heard some impressive stories about what people have done in the service of others.

In two experiments, Kurt Gray, who heads the Mind Perception and Morality Lab at the University of North Carolina, Chapel Hill, measured the physical strength of participants before and after they donated money to charity. Those who gave money were able to hold a weight for longer and grip a hand tighter than those who weren’t given the opportunity to donate — and that was after he’d taken pretest strength into account.

“The very act of doing good increases agency,” Gray writes, and suggests that the power of doing good could improve self-control. “Perhaps the best way to pass by the donut box at work is to give away your spare change on the way to the office.”