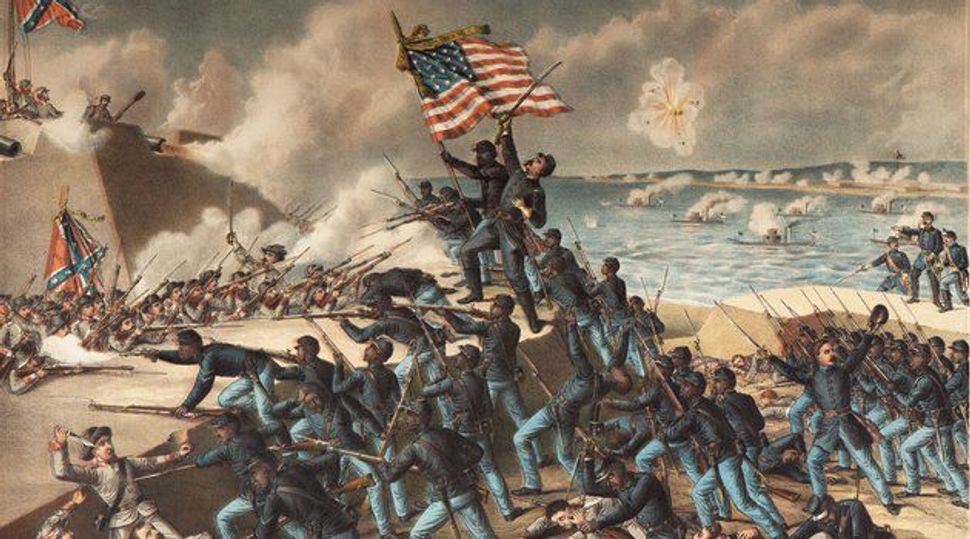 Teaching Moment: The collection includes this print showing the 1863 attack on Fort Wagner, South Carolina, by one of the Union army’s first black regiments. Image by Courtesy of the Gilder Lehrman Institute

Investment banker Lewis Lehrman had been collecting historical documents for almost thirty years when his friend Richard Gilder walked into his office one afternoon in the late 1980s. Lehrman, who had taught history at Yale and Harvard, was looking through a catalog of historical documents that he was considering for purchase. After Gilder asked about the catalog and Lehrman described his hobby, the two decided to team up and build a collection together.

By 1994, the pair had created the world’s largest collection of American historical documents in private hands and started a not-for-profit meant to use the collection as an educational resource. The Gilder Lehrman Institute of American History, which won its co-founders the National Humanities Medal in 2005, runs summer seminars for high school history teachers, supports affiliated history-focused high schools and maintains a website full of resources for teachers looking to teach history through the study of primary documents. It is also the result of an unconventional philanthropy philosophy: Instead of donating their collection, Gilder and Lehrman envisioned it as a tool that could reinvigorate the study of history across the country.

“There are many, many great philanthropists in the world, but what [Gilder and Lehrman] did was something that was really unusual,” said Lesley Herrmann, the Executive Director of the Institute since its inception in 1994. “They didn’t care about one place, they cared about teachers and they cared about students. This was a virtual thing.”

Gilder, 82, grew up in New York City as the grandson of Jews from Alsace-Lorraine, a territory annexed by Germany from France in 1871. He had been involved in a number of philanthropic and business projects before befriending fellow Yale alumnus Lew Lehrman through some business dealings. After forming a successful stockbrokerage firm and setting up the Central Park Community Fund (which would evolve into the Central Park Conservancy) with investor George Soros, he helped overhaul Yale’s endowment fund through a series of savvy investment strategies in 1979. In the 1990s he spearheaded the renovation of the Hayden Planetarium, and named Neil deGrasse Tyson its director in 1996, kickstarting his career.

Lehrman, 76, who was born in Harrisburg, Pennsylvania, is not only a businessman in his own right — he was the president of the Rite Aid pharmacy chain and started his own investment firm — but also the historian behind the collection, having published books and papers on subjects like Abraham Lincoln and American financial history. He ran as the Republican candidate for governor in New York in 1982 and lost to Mario Cuomo by just over 3 percentage points.

While Gilder contributed more money and the larger vision of what the collection could do, Lehrman worked with buyers to shape the collection, Herrmann said.

When the word got out that they were starting a collection, a surprising number of rare documents came out from basements and attics across the country.

“People came forward and said ‘I have my grandmother’s letters,’” Herrmann said. “Or they’d found an old union flag in Ohio somewhere.”

By 1994, they had accumulated a collection of 65,000 documents, which includes two copies of the Constitution and an early letter from Christopher Columbus to King Ferdinand of Spain. The entire collection, which was originally housed in the Morgan Library in New York City and now sits in a basement vault of the New-York Historical Society, is currently being scanned and digitized.

The documents are separated into specific teaching units on the institute’s website. These units contain several teaching strategies that can be used with students of any level — from those struggling to read to those preparing for Common Core or Advanced Placement tests. The hotly debated Common Core standards introduced in 2009 emphasize the analysis of primary documents over interpretation of secondary documents.

“Gilder Lehrman has played a great role in stimulating and coordinating the teaching of U.S. history, particularly in the packaging of materials,” said Hasia Diner, the director of the Goldstein-Goren Center for American Jewish History at New York University, adding that access to primary documents is a “gold mine” for high school teachers and students.

Alessandro Weiss, principal of the High School of American Studies at Lehman College in the Bronx (one of the Gilder Lehrman Institute’s affiliate schools), said that studying history through primary texts has become more popular over the last 20 years or so, and for good reason.

“All of our history classes teach through the use of primary source documents, and the importance is that when doing so history becomes not a static tale, but the collected result of various points of view,” Weiss said. “I think it’s extremely important for teenagers who are studying history to recognize the importance of point of view.”

Point of view is a recurring theme in Gilder Lehrman’s materials, which also feature letters, diaries and other papers written by both famous figures and everyday people. Robert Sandler, who has attended several Gilder Lehrman summer seminars over the years, frequently uses Gilder Lehrman materials in his history classes at Stuyvesant High School in New York City. He has his students compare different accounts of events such as Paul Revere’s ride and speeches by Martin Luther King and Malcolm X.

“What the primary documents do is give the kids this little window into a special moment in time,” Sandler said. “And they can see that it wasn’t inevitable that we were going to be a successful republic and write the Constitution and become this empire that we are today.”

While many have praised the Institute’s accomplishments, Lehrman himself was more guarded in his assessment.“There has certainly been some improvement in the study and teaching of history in our schools,” he said in an email. (Gilder and he were not available for personal interviews.) “However, there is a long way to go to attain the excellence we at the Gilder Lehrman Institute aim for.”