Maybe Once Was F–cking Enough 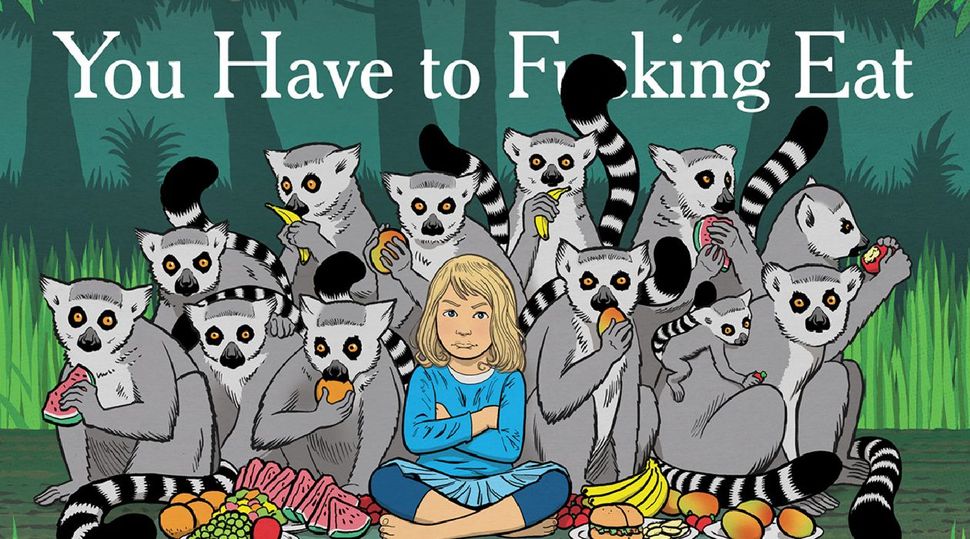 ● You Have To F–KING EAT
By Adam Mansbach Illustrated by Owen Brozman
Akashic Books, 32 f–king pages, $14.95

I’m sure I won’t be the one critic
Who’ll review Adam Mansbach’s new book in rhyme
The idea’s hackneyed, but hell, what the f–k
It’ll save space and a shitload of time.

Like many a reader and writer
I felt some envy and some admiration
Way back in the year of twenty-eleven
Upon “Go The F–k To Sleep’s” publication.

To be truthful, after I read it
I wasn’t the book’s biggest fan
The “f–ks” and the “shits” were amusing
But the hostility creeped me out, man.

Still, the bigger part of the story
The one I feel like expressing
Is that the book’s viral success
Was actually pretty f–king depressing.

For, Adam Mansbach’s an author
Of some profound, legitimate shit
“Rage Is Back,” “The End of the Jews”
And this bullshit’s what becomes a hit?

But kudos to Mansbach and Samuel L. Jackson
And the publisher Akashic as well.
For having the foresight and humor
To know how well this could sell.

And so here comes the inevitable sequel
About which millions will inevitably tweet
In this one, a parent impels a child
“You Have to F–king Eat.”

(At this point, you may well be wondering
Why I’m not conforming to a particular meter
But the truth of the matter’s that in this book
Mansbach ain’t so f–king consistent either.)

An artist named Owen Brozman
Contributes some cute illustrations
Of lemurs and pandas and some other shit
But the book seems to lack inspiration.

It’s the inevitable curse of artists
To be judged for what they did first
“Your early shit was awesome, man;
Your new shit’s really the worst.”

But it’s hard to escape the impression
That the first book emerged in a flash
While this tepid second installment
Was mainly written for cash.

And not to get heavy, but eating disorders
And people verb’lly abusing their kids
To me doesn’t seem quite as funny
As perhaps it once did.

I suppose I could drone on a bit longer
There could be more space to devote
But I see I’ve reached stanza #15
That’s one f–kin’ more than Mr. Mansbach wrote.

Maybe Once Was F–cking Enough