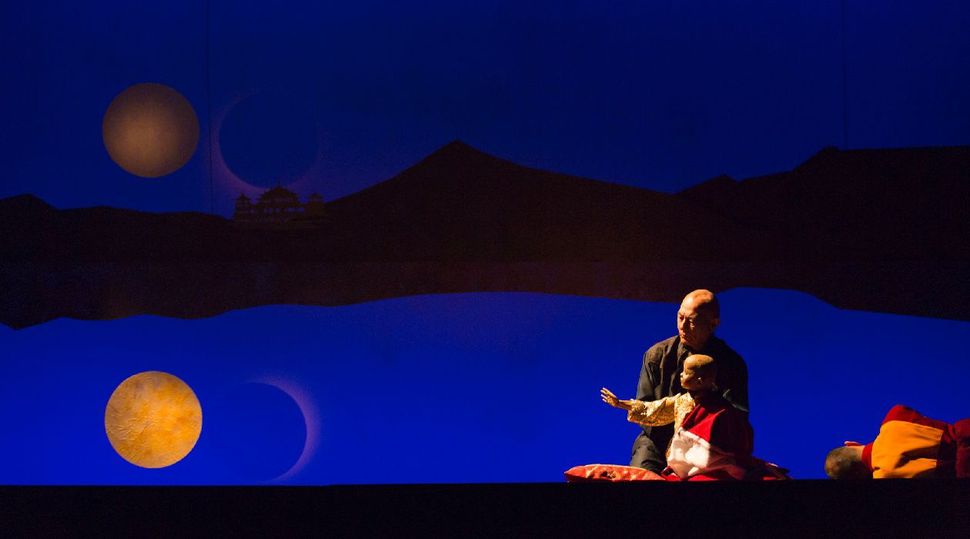 The Child Is Father of the Man: A scene from Sarah Ruhl’s “The Oldest Boy” at Lincoln Center. Image by T. Charles Erickson

What do you do if your toddler is a god?

In Sarah Ruhl’s beautiful and searching new play, “The Oldest Boy,” now playing at Lincoln Center Theater’s off-Broadway Mitzi Newhouse Theater, a Catholic-raised, all-American mother is visited by a pair of Buddhist monks, who inform her that her 3-year-old is the reincarnation of a high-ranking Tibetan lama, or spiritual teacher. (So not a god, actually, but still nothing to sneeze at.) A spiritual seeker who is drawn to Buddhist teachings — and whose husband is a Tibetan émigré — she wants to be respectful of the religion and culture. But as an American mother, she is horrified by the idea of giving up her son to a distant monastery, in India.

Ruhl, who won the MacArthur “genius prize” in 2006, specializes in plays that mix the metaphysical with the quotidian, placing profound questions and somewhat surreal situations amid instantly recognizable, and often slyly commented upon, scenes of middle-class American life. The magical realism is embellished here by the depiction of the 3-year-old boy, Tenzin, as a puppet, controlled by two Tibetan puppeteers and voiced by a middle-aged Tibetan man. (His parents are never named, identified only as “Mother” and “Father” in the Playbill and script.) That decision makes sense — how could a 3-year-old actor play this important role? — but it also serves a larger purpose, underlining the boy’s otherworldly nature, and giving him a voice that is wise beyond his years. The questions Ruhl raises are similarly practical and profound: Would you let your son be proclaimed a lama and whisked off for religious instruction? How seriously do we take religious traditions we claim to respect? How do we connect with people and how do we separate from them? What are our responsibilities to ourselves, our families, our societies?

The thrice Tony-nominated Celia Keenan-Bolger stars as Mother, and she is fantastic, locating a steely core of conviction amid her character’s frequent awkwardness, confusion and eagerness to please. James Yaegashi, as Father, is tender and stolid, though perhaps without the charisma that would make us understand Mother’s immediate attraction to him. James Saito and Jon Norman Schneider are charmingly beatific and slightly puckish as the two monks who come for Tenzin. And Ernest Abuba, as the voice of Tenzin and also the aged lama within him, brings a tender gravitas to the whimsical role. Finally, Rebecca Taichman’s elegant but mostly minimalist staging, on sets by Mimi Lien and lit by Japhy Weideman, draws us eagerly into this family’s world — and presents some strikingly beautiful stage pictures as the family, almost inevitably, first driven by curiosity and then by belief, travels to India and toward Tenzin’s fate.

As the story progresses, with the American Mother and Tibetan-American Father debating whether to accept the monks’ revelation about their son — and Ruhl stacks that deck, with several signs indicating that Tanzin is in fact the reincarnated lama — there is also a long flashback to the couple’s courtship and marriage. Mother, a graduate student in English literature, was walking home from her advisor’s funeral when, caught in a rainstorm, she wandered into the Tibetan restaurant run by Father, a gifted chef. They have a long conversation, and start to fall in love, when Father reveals that he is unavailable, set to marry a Tibetan woman he has never met. Mother, too, is engaged, but realizes she has met her match. Eventually, he breaks off his engagement, disappoints his parents, and they settle down to a pleasant, comfortable life.

There are layers upon layers of good stuff here. Buddhism is a religion based on teaching and study; Mother is undone by the death of her teacher. She takes refuge from the rain in a Tibetan restaurant; converting to Buddhism is called “taking refuge.” (Her teacher, Mother says when the more senior of the visiting monks offers to pray for him to have a good rebirth, was Jewish: “He didn’t believe in reincarnation.” “What did he believe in?” the monk asks. Mother thinks briefly before answering. “Literature,” she says. People of the Book, indeed.)

In the same flashback section, Father, explaining his internal conflict between his love for Mother and his obligation to his family, and to his disappearing — diasporic, even — culture, is deeply eloquent. You chose to come to America, Mother tells him. Chose me. “Americans like to choose things,” he says. “You choose things all the time. I would like a soy chai latte, wet, with extra foam. You have these preferences. And you believe that these preferences reflect your identity, and that’s all you believe. When it’s convenient you are religious. When it’s not convenient you are not religious. When it’s convenient you help your family. When it’s not convenient you do not help your family.” It’s powerful, and tribal, and not unfamiliar. Indeed, and conversely, one can almost hear an imaginary, I-told-you-so-ing Mother in one’s head: “You couldn’t stick with your own kind, and now your son is being sent off to India.”

Near the play’s start, Mother mentions to the visiting monks her adherence to “attachment parenting.” (They’re that kind of family.) By the end of the play, she has decided, or relented, to separate from her son, leaving him enthroned at the monastery. Along the way, she discusses the death of her teacher, and how lost she felt without him; the death of her mother-in-law, and how her husband never talked about her after that, because, he explains, “It’s not good to talk about dead people too much — if you do, they’ll stay attached to this world, they won’t get a good rebirth”; and Buddhist theories of rebirth and reincarnation. We’re left thinking about separation and attachment and the possibility of simultaneously separating and remaining attached, both in life and in death.