She’s Living in Her Own Private (Jewish) Idaho 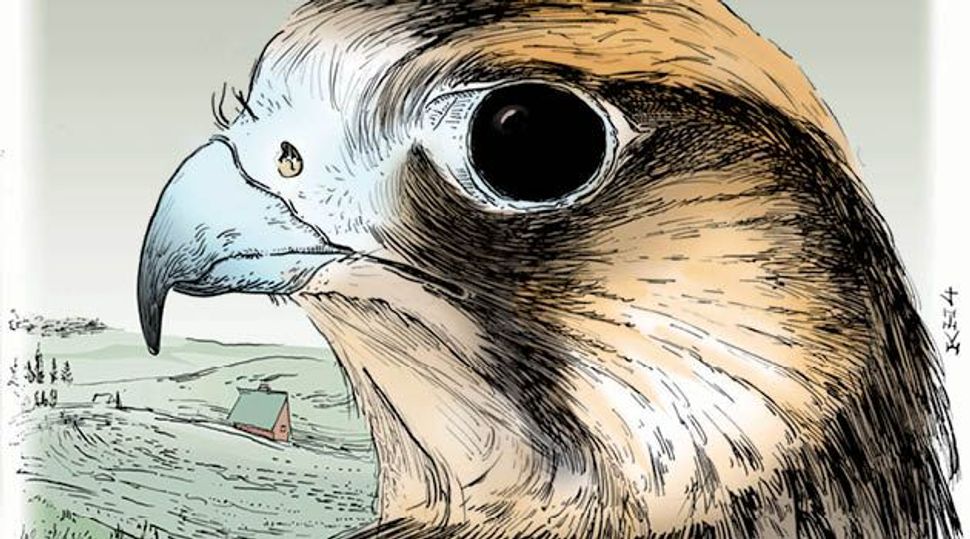 I was born in Washington, D.C., where my mother called from her hospital bed to put me on the waiting list for a good nursery school. My own kids were born at home in Idaho (one in the bedroom, one in the living room), where getting them into a good preschool was a little less fraught.

I’m sure my mother wasn’t thinking about Judaism when she signed her first child up, and neither was I. But as the parent of Jewish kids in Idaho, I am always considering how to navigate some issue (Santa in the schools, offhand slurs and conflicts with the High Holidays, to name a few). My husband and I moved here in the summer of 2001, a few months before our daughter was born, which means that virtually all my impressions of being Jewish in Idaho have been filtered through the lens of being a parent.

When each of our children turned 8 days old, we buried his or her frozen placenta in the backyard, above which we planted a fruit tree (Stanley prune for our daughter, Stella cherry for our son). Then the guests arrived for our Jewish naming ceremony and we read aloud the words we had cobbled together. An essential part of living here, we’ve been told frequently, is that one has to take responsibility to make things happen.

As I start writing this essay, it is September here in Moscow, Idaho, and the public schools have started two weeks late. You might think the delay is due to a shooting here — our state likes its guns. But no, the unexpected delay was due to district-wide renovations, specifically of unfinished bathrooms. Idaho is ranked last in the nation in terms of per-pupil spending, according to the 2010 U.S. Census. People here generally seem happy with our local schools, but I am keenly aware that kids in our town, much less those in more rural districts, do not have the same access to academic opportunities as kids where I grew up.

School has been in session for only one day, and I am already riding my bike to meet with one of my daughter’s three teachers — curriculum night for the middle school was inadvertently scheduled for Rosh Hashanah, and I am waiting to find out if this can be changed.

Actually, I consider these teachers friends. Part of me gets that this particular conflict is relatively small potatoes, and part of me has had enough — which may be why, when I am told that the date of curriculum night cannot be changed, my response wells up inside me and is not easily contained. The teachers confer again and decide to change the date.

Growing up, I had a Bat Mitzvah at my own initiative. As an adult, prior to living in Idaho, I often did the minimum one might do to be a practicing Jew, and sometimes not even that. But being a Jewish parent in Idaho has radicalized me. I signed our daughter up for a different preschool when I learned beforehand of the other school’s annual three-hour Easter party, and I feel like I’ve been on the warpath — or some kind of vigilante path — ever since. Our kids attend a public charter school that doesn’t do holidays and that prides itself on having “Diversity and Inclusion” as one of its design principles. Even there, it would be easier to go with the flow and forget about all this Jewish stuff — but in a sense it is affirming to see how much it turns out I actually care. Here I led the charge for a small group of fellow parents to resurrect our Jewish community’s long defunct Sunday school. We meet once a month in a restaurant downtown. I coordinate the Sunday school and kids’ activities at the community Hanukkah party.

I realize, though, that we are not just a small outpost of Jews here, but are also right in the middle of some kind of religious and political vortex. Moscow is home to many churches and creeds: Latter Day Saints; fundamentalist Christians, some of whom ostensibly think non-Christians are destined for Hell; liberal aging hippies and academics; and traditional longtime Idahoans. A couple of years ago, the American Humanist Association began test-marketing billboards here along the lines of “No god? No problem” before running them nationally because they consider Moscow “politically diverse.” Diverse may not be the first word that leaps to mind when one thinks of Idaho, but for a bunch of mostly white people, Moscow’s makeup feels surprisingly complicated.

When we moved here, our friends all made the same jokes about us going off the grid and living among neo-Nazis. We moved to north central Idaho right around the time that Richard Butler, leader of the neo-Nazi group Aryan Nations, was having his unsuccessful day in court. The prospect of choosing to live here seemed spooky. But Moscow, home of the University of Idaho, turned out to be easiest and friendliest place we had ever moved.

People we’d just met were always stopping by, and all my new mom friends canned their own fruits and vegetables and put up their own drywall and hand spun their own yarn, farmed and made soap and raised goats — all things that growing up in the east I knew nothing of.

The fact that our local Jewish community was small did not overly concern me — and I immediately found its smallness to be welcoming. A friend of a friend of my sister happened to be president of the Jewish Community of the Palouse at the time, and I learned when I called her before our move that the JCP, comprised of people from the neighboring towns on both sides of the Idaho-Washington border, had roughly 100 members. “One hundred families?” I asked. “One hundred members,” she repeated.

In hindsight, I think she must have been padding the roster. The actual number of active members seemed closer to between 10 and 15 on a good day, counting kids, though with two nearby universities, many more turned out for the High Holidays.

Idaho is said to be the state with the lowest number of Jews per capita in the nation, and I could rattle off amusing anecdotes til the cows come home about how few Jews there are here. Nonetheless, the biggest surprise for me has been not how few Jews there are, but how many. Every so often, when I make a comment about being Jewish, the person I’m talking to will say they have a Jewish parent or grandparent. The most notable revelation in this regard came from our next-door neighbor, who, upon being invited to our daughter’s bat mitzvah, mentioned that her father’s grandmother was the founder of Hadassah, Henrietta Szold.

Interestingly, Idaho was the first state to elect a practicing Jewish governor, Moses Alexander, in 1914. Alexander also played a key role in establishing Idaho’s first synagogue, in Boise. Earlier Jewish history is thin. There are accounts of a handful of Jews who lived and died among the pioneers who came across the mountains in the 1800s, working as merchants, or who came here for the gold rush and lived in the mining camps

As I write this essay, my daughter’s bat mitzvah is only a few weeks away. As far as I know it will be the first in our town to be led by an actual rabbi. My neighbor across the street, I’ll call her Kris, a Christian who says she’s attended many churches and found value in them all, who believes that Jesus Christ died for our sins and that the Bible is true, is busy helping us prepare by canning jam from the plum tree planted for my daughter’s Jewish naming ceremony, to give to families at the bat mitzvah. When I join Kris on the jam project, our day together reminds me of what I love most about living here. We are in full swing — chopping, blending, stirring and cooking — when a friend of hers who grew up in “the deep rural core of Idaho” (Kris’s words) comes over to have Kris braid her hair. The kitchen door is open, and a young neighbor boy comes in, helps himself to a snack, and settles himself in the living room. Two other neighbors stop by, the first one asking for details about the bat mitzvah, the second one bringing a sample of her own home-canned jam and apologizing that her husband and two older sons won’t be able to attend due to it being opening day of deer hunting season. I realize we had carefully avoided football weekends but forgotten about deer season. The Jewish purpose of our jam canning passes without comment, but Kris’s friend mentions that she never eats home-canned vegetables. When she was 14, her best friend’s family all died in their sleep after eating home-canned pickled beets. Her friend, the only one who didn’t eat the beets, woke in the morning to find her entire family dead.

One of my favorite Idaho experiences took place last fall, when I was invited to work as a teaching artist for a week with an entire rural K-8 school — that is, 19 kids — guiding them in writing a collaborative Christmas play based on their study of the Oregon Trail and the westward expansion. (Did it have to be a Christmas play? Actually, it did.) This school was in a district so rural that school meets only four days a week, with the high school a two-hour bus ride away each way. It was stunningly beautiful there. Did anyone care that I was Jewish? Not at all. I loved working with the kids and their two highly dedicated half-time (i.e., seriously underpaid) teachers, and I loved the play the kids wrote, “The Cookie Crime at Christmas Time.”

When we bought our house in 2001, the previous owners couldn’t find the key, having never used it. When we first moved in, two police officers came to the door (usually not a good sign) to tell me I had parked our car facing the wrong way on the street. If there is an injustice here, somebody is going to speak up and try to make it right.

I still sometimes make jokes about living in Idaho. But I don’t want to be a rueful and ironic outsider; for the most part I love living here. My kids travel to Hayden, the former neo-Nazi stronghold, to play soccer sometimes. It feels green and manicured there, not creepy and foreboding.

Judy Sobeloff is a writer and teaching artist who lives with her family in Idaho.

She’s Living in Her Own Private (Jewish) Idaho