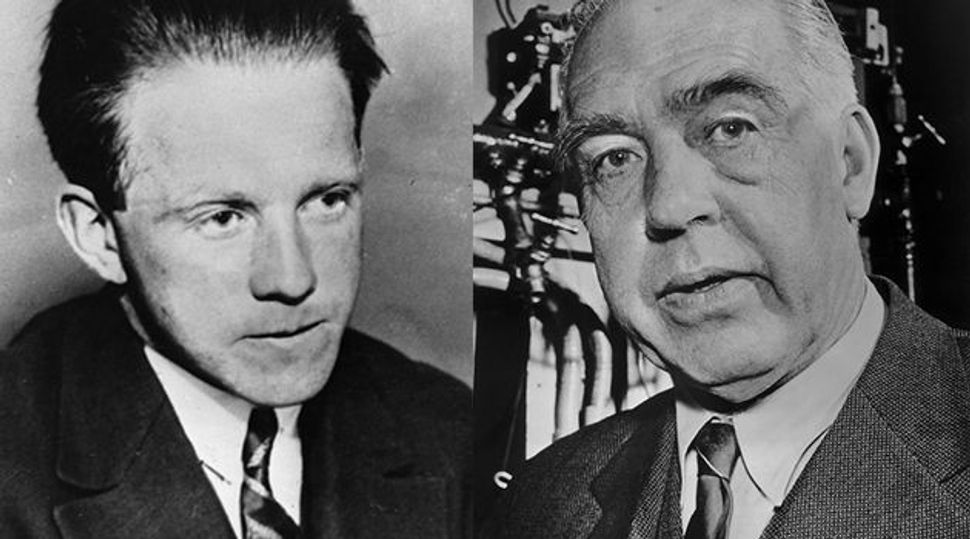 ● Serving the Reich: The Struggle for the Soul of Physics under Hitler
By Philip Ball
University of Chicago Press, 320 pages, $30

In his 1998 play “Copenhagen,” Michael Frayn used the Heisenberg uncertainty principle — a cornerstone of modern physics — as a metaphor for the impossibility of pinning down historical facts when memories and motives collide.

The play concerns the famous 1941 meeting in Copenhagen between the Danish physicist Niels Bohr and his onetime colleague and friend, Werner Heisenberg. It was a fraught moment, with Denmark occupied by Nazi Germany, Heisenberg leading Germany’s nuclear program, and the half-Jewish Bohr on the cusp of fleeing for his life. The question at the play’s heart is just what these two titans of physics might have said to each other about the science and morality of atomic energy before parting in anger.

Like “Copenhagen,” to which it alludes, Philip Ball’s “Serving the Reich” is informed by a sense of just how difficult it can be to construct accurate historical narratives, let alone judge moral choices in hindsight. As Hitler and his bureaucrats asserted control over every segment of German society from 1933 on, those choices would become increasingly constrained.

Even so, Ball argues, there was some space for dissent, and “one can also overestimate the dangers of protest, at least in the early years of Nazi rule.” Still, with the first Nazi concentration camp, at Dachau, already operating in 1933, it cannot have been easy to gauge how much dissent was permissible or safe.

At the time, no one knew how long Hitler’s rule would last, or how catastrophically it would end. Some caution would have been understandable. “Serving the Reich” explores just how timidly most of Germany’s physicists reacted to the anti-Semitic edicts that imperiled their Jewish colleagues, as well as to other challenges to their autonomy.

Ball’s writing can be ponderous, especially when his narrative veers from history to physics and attempts to summarize complicated scientific concepts. But, overall, he delivers a fair-minded and meticulous assessment of the generally weak-kneed response, and especially of the actions of three non-Jewish physicists in Germany, all Nobel laureates.

The better known are Heisenberg, “arguably the most gifted physicist of his generation,” and Max Planck, “a conservative traditionalist” and the senior statesman of German physics. Ball’s third protagonist is Peter Debye, a Dutch national who was trained in Germany, and whose achievements included decoding how molecules interact with light and other forms of radiation.

Heisenberg’s character, as well as his role in Germany’s failure to develop an atomic bomb, has been well-parsed in conflicting biographies by David C. Cassidy, Thomas Powers and Paul Lawrence Rose, among others. But Debye, too, has recently become the focus of controversy. The Dutch journalist Sybe Rispens accused him of colluding with the Nazis and called him “a Nobel Prize-winner with dirty hands” — a view that Ball regards as unduly harsh.

Not that Ball sees any of the three physicists as heroic. None was, he says, a committed National Socialist, but as their Jewish colleagues — beginning with Albert Einstein — left and took posts abroad, they stayed on and, in effect, served the German Reich. Together, Ball writes, they illustrate “the diverse ways in which the majority of scientists (and other citizens) situated in the grey zone between complicity and resistance adjusted to Nazi rule.”

About a quarter of Germany’s physicists were “non-Aryan,” and subject to dismissal and worse. But the decimation of German physics led to “little more than private expressions of dismay,” Ball reports. A handful of physicists — among them, Max von Laue — were openly contemptuous of the Nazis, and Paul Rosbaud, a physics journal editor, became a British spy. But these were the exceptions.

In other cases, Ball writes, “much of the story lies beneath the surface,” inviting the elaboration of “Rashomon”-like narratives subject to multiple interpretations. Ball sees the well-meaning Planck as having been paralyzed by his penchant for rule-following and propriety. Both he and Heisenberg worried that their departure would leave German physics to incompetents or party hacks, such as the anti-Semitic physicists Philipp Lenard and Johannes Stark (both also Nobel laureates).

Stark attacked Heisenberg as a “White Jew” for his continued fealty to Einstein’s relativity and quantum theory. The Gestapo and SS investigated and exonerated him, despite his apparently insufficient antipathy toward Jews. Ball skeptically reviews the debate about Heisenberg, Bohr and atomic energy, concluding only that during the war Heisenberg “had become lost in self-regard.”

Debye, at the height of his influence, was both director of the Kaiser Wilhelm Institute for Physics in Berlin and chairman of the German Physical Society. In 1938, he was obliged by dint of his position to write a letter asking the remaining Jewish members of the society to withdraw. But he also helped spirit some of those closest to him out of the country, notably Lise Meitner, an Austrian Jew whom Ball describes as “arguably the best nuclear scientist in Germany.”

As pressure mounted on Debye to renounce his Dutch citizenship, he took a leave from the institute and, in 1940, assumed a professorship at Cornell University. There he stayed, albeit without completely severing his ties to Germany; Ball characterizes Debye as being “out of his moral depth.”

One senses that what these brilliant, if not always brave, physicists wanted most was to be left alone to do physics. As Heisenberg wrote to his mother: “The world out there is really ugly, but the work is beautiful.” Ball’s argument is that such splendid isolation was neither possible nor desirable in the face of tyranny.