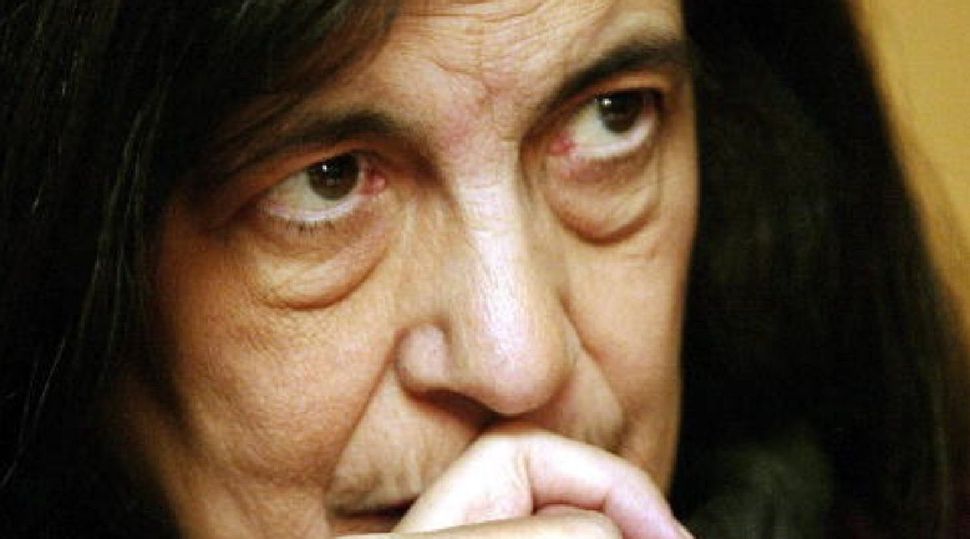 On Seeing: Sontag passed away in 2004. Image by Getty Images

When Susan Sontag passed away in 2004, her New York Times obituary described her as a “renowned novelist, essayist, and critic.” “Regarding Susan Sontag,” a documentary directed by Nancy Kates that airs on HBO on December 8, shows that Sontag might have appreciated that order, with the word “novelist” leading the way. Despite all of her commentary on art and politics, and all of her fame and recognition, she also longed to be more of an artist.

By the end of her life, Sontag had obtained a celebrity status enjoyed by very few (if any) intellectuals and won numerous awards, including the National Book Award for fiction. However, her celebrity and sweeping theoretical works had made her an easy target for critics. Her personality, as the film shows, was abrasive to some of her many friends and lovers. For example, during her third and final bout with cancer, she asks her sister Judith to air any grievances she had with her. Judith responds by saying that she regretted that Susan had not been honest with her for most of her life.

On top of all of this, some of the film’s talking heads suggest that the National Book Award was awarded in recognition of her entire body of work, not just her last work of fiction, “In America.” This was something Sontag must have had in the back of her mind, especially since some of her fiction received mixed reviews. However, she was critical of the majority of her writing – at one point, the film shows Sontag describe her essays from the sixties and seventies as immature.

Of course, things turned out better for us that Sontag did not stick to writing fiction. Her insatiable intellectual curiosity led her into literary and theoretical criticism, political advocacy, and filmmaking – and it helped her produce some of the twentieth century’s most seminal works of nonfiction along the way, including the essay “Notes on Camp” and the book “On Photography.”

This film (which takes its syntax from Sontag’s last book before her death in 2004, “Regarding the Pain of Others”) is a very traditional documentary that benefits from the fascinating life of its subject. However, it also takes for granted that most viewers already know Sontag’s place in the pantheon of 20th century thinkers. Instead, the film gracefully focuses on her personal relationships and her relationships to the fields of art and criticism – both of which were alternately glamorous and turbulent at times.

After going to college at 15, marrying University of Chicago professor Philip Rieff at 17, and had a child with him at 19. After nine years of marriage, she got divorced and went on to have relationships with several high-profile artists and academics, including the painter Jasper Johns, dancer Lucinda Childs, and photographer Annie Leibovitz. The film explains that Sontag was attracted to artists who were stars of their field, and many people were attracted to her – she was photogenic and she knew it (for example, Andy Warhol gave her a flattering “screen test” in the late sixties). It was liberating, the film explains, for Sontag to hang around artists who were only interested in their craft, and not the brainy analysis of art.

The film also delves into Sontag’s complicated relationship to Jewish culture. She was born Susan Rosenblatt to two Jewish parents in 1933 and only took the name Sontag from her stepfather after her biological father died of tuberculosis when Susan was 5. She was happy to take the less Jewish sounding name because she was teased and bullied at school for being Jewish. Of her Jewish identity, she says in the film: “[It] mattered in that I stood up and would be counted any time it mattered for other people…I’m Jewish because that’s what people say I am sociologically or historically.”

However, this identity inevitably crept into her work. In 1964’s “Notes on Camp,” perhaps her most famous piece, she wrote: “The two pioneering forces of modern sensibility are Jewish moral seriousness and homosexual aestheticism and irony.” Although she was never outspokenly Zionist or anti-Zionist, she traveled to Israel in 1973 to film a documentary called “Promised Lands” about the Yom Kippur War and its aftermath. And at one point in the film, Sontag says: “I feel as a Jew a special responsibility to side with the oppressed and the weak.”

With all of the information that the film squeezes into 100 minutes, “Regarding Susan Sontag” does not feel like the definitive documentary or biography of Sontag, as it leaves out a detailed discussion of her work. However, it does add to the public perception of Sontag as a real person instead of a larger-than-life intellectual figure. As this December marks the tenth anniversary of Sontag’s death, maybe it is time to reassert her place as one of the foremost representatives of twentieth century American culture.