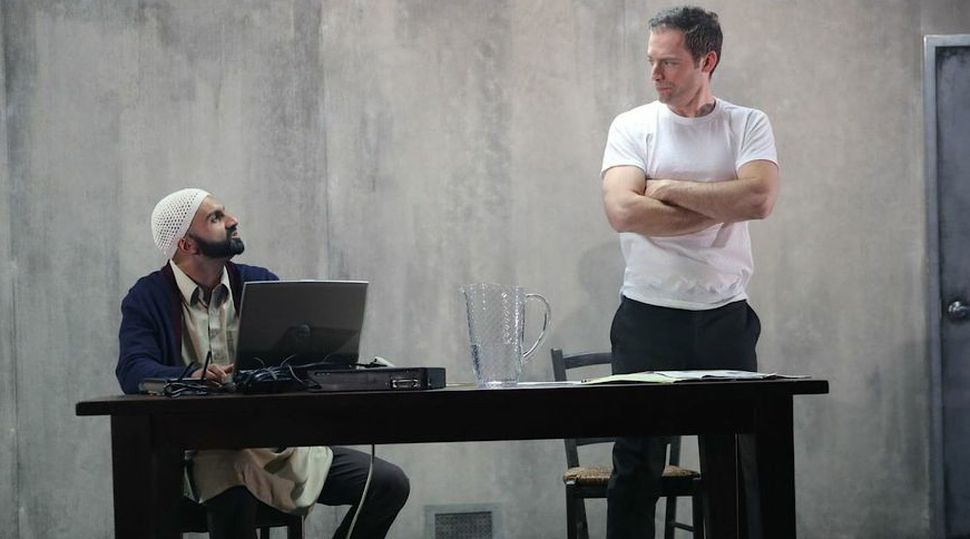 Nick Bright is a trader, and he’s working an angle.

The main character in Ayad Akhtar’s new play “The Invisible Hand,” Nick is an American banker working in Pakistan, and he’s been kidnapped by what we might politely term an armed Muslim religious group. (We might also call them terrorists.) Nick was kidnapped by accident — the plan was to grab his boss, a more important figure, but Nick was in the car instead. Still, Imam Saleem, the boss of this group, is determined to his money’s worth for the American asset he has acquired, and he’s demanding a ransom of $10 million. Nick knows he’s not important enough for Citibank, his employer, to spend that much on him, but he sees a opportunity: He’ll take the few million he’s likely to fetch, and he’ll play the markets, multiply the money till it’s $10 million. He’ll earn his release.

Mr. Akhtar won the 2013 Pulitzer Prize in drama for an earlier work that’s now playing on Broadway, the brilliant and chilling “Disgraced,” about an upwardly mobile Muslim-American yuppie on the Upper East Side, grappling with his heritage and his ambition. “The Invisible Hand,” which opened off Broadway last night at New York Theatre Workshop, works, broadly speaking, in the same space: the sometimes violent — though differently violent, in these two plays — collision between Western and Muslim cultures and values. But what “The Invisible Hand” is ultimately about is faith, be it in Allah, in religious leaders, in markets, or in the safety of the dollar — Nick’s senior thesis at Princeton, we learn, was on Bretton Woods, the global financial system developed at the end of World War II that turned the dollar into world’s dominant currency — and how that faith can be misplaced and manipulated. (The hand of the title is Adam Smith’s, of course, but also maybe just a little bit God’s.)

This all makes “The Invisible Hand” conceptually sort of fascinating. As the terrorists become capitalists, under Nick’s tutelage, they become insider traders of the most deadly sort. If you know a rival militant group will be ambushing a local leader tomorrow, why not short the companies he and has allies control? It’s a stratagem that pays off nicely for Nick and his captors.

The money also changes the militant group. Early in the play Imam Saleem, the leader, seems steely and potentially dangerous but also thoughtful, charismatic, and perhaps genuinely interested in helping the local population. (A main bone of contention is the privatization of the local water system, which does seem like the sort of thing that would be profitable for Citibank and less so for poor people who want clean water. And also the plot of “Urinetown.”) As money starts coming in, it also starts disappearing from the trading accounts, diverted by the Imam. It also further radicalizes Bashir, Nick’s main antagonist-cum-partner, a London-born minor jihadi who begins the play in thrall to the imam but, emboldened by the money he’s making with Nick, eventually moves to supplant him.

Still, like the futures contracts so skillfully exploited by Nick and Bashir, the drama of “The Invisible Hand” remains, for the most part, a conceptual exercise. If modern finance no longer involves the making or funding of actual things—just, instead, the skillful movement of money from one place to the next, leveraged, repackaged, and arbitraged for maximum return — the play, too, feels oddly bloodless (some abrasions and lacerations notwithstanding). In “Disgraced,” there is plenty of theory discussed and ideas pontificated, but the play also packs a devastating visceral punch, well before any physical blows are thrown. But that’s in part because “Disgraced” takes place so clearly within our own world, over a Manhattan dinner party. “The Invisible Hand,” set within a tin-roofed compound in Pakistan, concerned with offstage intrigue and onstage investing, never becomes so engrossing.

That may also be thanks to the polished staging, by Ken Rus Schmoll and the appealing, smooth lead performance from Justin Kirk, a stage and screen actor perhaps best known for his role on “Weeds.” His Nick Bright is clearly bright, clearly charming, and clearly trying to figure his way out of an impossible situation. But he is also resolutely in control, at least of his emotions if not of his whereabouts, and, as such, his horrible imprisonment never seems all that horrible. Similarly, the concrete-and-metal set, by Riccardo Hernandez, seems more stylishly minimal than squalid. Dariush Kashani, as Imam Saleem, is sometimes wise and sometimes scary but always charismatic. Usman Ally, as Bahsir, Nick’s captor and trading partner, alternatively charms and rages but seems mostly like a testosterone-fueled post-collegiate. (Jameal Ali, as the stolid guard Dar, rounds out the case.) There’s no real sense of Nick’s fear or desperation.

We’re left seeing Saleem’s group as, to some degree, just another corporation, with its internal intrigue, its crosstown competitors, and its ambitions for growth. It’s a provocative idea, and not a crazy one, and Nick and Bashir’s insight that a well-timed short built around a terrorist event can leverage a killing into a killing is its logical conclusion. If the stakes felt higher for Nick, morally or otherwise — that he eventually earned his freedom seems almost incidental — this interesting play could be a more successful one.