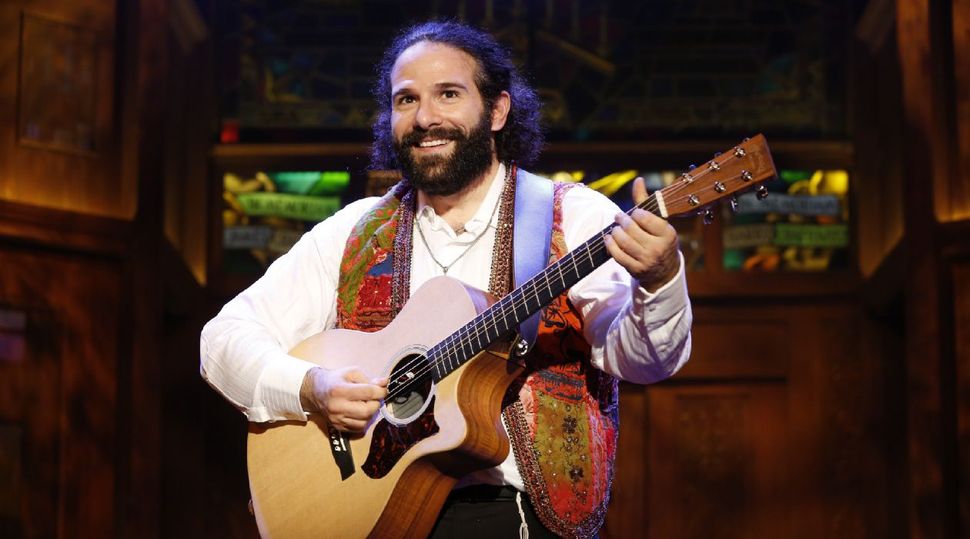 Though not an actor by trade, I’ve spent the last month preparing to portray Shlomo Carlebach in the off-Broadway production of “Soul Doctor.” Until now, the majority of my professional life has found me moving between the Jewish and secular music worlds, using a broad skill set to build a career that is both artistically and spiritually fulfilling. It’s an extraordinary gift to bring people a sense of connection and community through music and prayer and I’m grateful every day for the incredible blessing that is my work. This latest job, however, is different from any I have accepted in the past.

Two vests hang on the costume rack in my dressing room. One is jet black, the other multi-colored and ornately embroidered. They are so very different, yet each representative of so much.

Like most of his contemporaries, Shlomo grew up wearing the prototypical “uniform” of Orthodox Judaism: white shirt, black suit, black vest. In his early professional career, he often appeared without his jacket, and his vest became somewhat of a calling card. At some point in his journey, however, the vest itself transformed; gone was simple black, replaced by vibrant reds and blues, striking shades that shone brightly in a sea of otherwise dark fabrics. This multi-hued shift was hardly innocuous; Shlomo himself had changed, and the colorful vest was effectively a statement that he would no longer be bound by convention nor by the expectations of others.

The vest is, quite simply, no less than iconic.

I was 19 years old when Shlomo passed away. I never had the opportunity to meet him, but I am deeply in love with his eldest daughter, Neshama, and am very close with his grandchildren. Like many of us, I sang his songs from an early age, though I didn’t know they were his compositions early on. As of late, I’ve had to undergo (to put it lightly) a crash-course in Carlebach. I have discovered so much in a relatively short time, and that discovery has been nothing less than transformative.

Playing Shlomo, I’ve learned that he was an extraordinary human being who espoused a deep yet distilled theology: Love is the answer, and it is unconditional, powerful love that will ultimately heal us all. Behind the simple message, however, was a man of incredible complexity and depth.

Through this process, I am profoundly changed.

I feel more deeply. It’s as if my insides have been turned out, like I am vulnerable and exposed. I feel more empathetic than ever before. I give more charity than in the past, helping anyone who asks. On every street corner. In every subway car. In an unusual twist of a catchphrase often utilized by other faiths, I often find myself asking “What would Shlomo do?”I truly hear my own voice. And now, when I sing, I also find myself listening. I am mindful. Aware. Alive.

Most importantly, I am more deeply attuned to the brokenness of others. I believe that this was a critical part of Shlomo’s insight; he inherently sensed that we are all broken, and taught us that we have a communal responsibility to heal each other and the world. In a multitude of ways, I’ve begun to live that message more than ever before.

While Shlomo was certainly a rabbinic genius, earning the respect and admiration of countless great scholars, he looked beyond the act of teaching and made personal outreach his life’s work. He reached outside the walls of his community, honoring and loving those who followed different paths, those whose skin was of a different color, those who embraced different ways to bring themselves closer to God. His romantic relationship with Nina Simone, which is gently explored in the theatrical production, is an example of this mindset. To this day, some are uncomfortable with the notion that Shlomo cared for Nina, or that they each had a profound effect on the personal growth of the other.

The truth of their relationship has been hotly contested by those who are uneasy with the thought of Shlomo having an interreligious or interracial relationship. In reality, this discomfort is not a reflection of their marital status, nor of the fact that she was not a Jewish woman, but of a subtle, cancerous underpinning of racism, the very type of ignorance that Shlomo himself crusaded against during his lifetime. I believe that he would be proud of the production’s willingness to present his open-mindedness to the world, if only to encourage others to, as the show’s lyrics often offer, “open their hearts.”

Every time I take the stage in “Soul Doctor,” I experience a glimmer of the extreme personal, professional and spiritual adversity Shlomo faced throughout his life. Despite this, he was able to overcome these challenges and to maintain a belief that we are each inherently blessed and highly capable of emotional and interpersonal depth. Shlomo transformed his life from one of black and white to one of Technicolor, inspiring us along the way to see the world in more than various shades of gray.

Shlomo often said that “we must know from where we’ve come in order to know where we are going.” The two vests cannot exist without each other – they are inherently intertwined. And now, in the midst of every show, when I trade the black vest for the multi-colored alternative, I am reminded of Shlomo’s message of hope, change, and love.