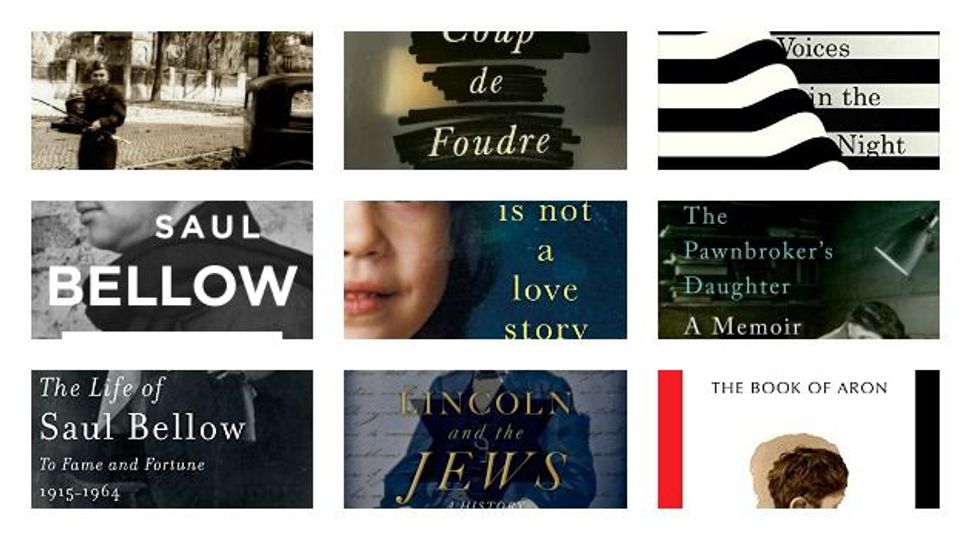 In 2015, Jewish stories will come in diverse guises — from flights of magical realism to groundbreaking history and biography.

Anniversaries continue to be catnip to the publishing industry: The 150th anniversary of Lincoln’s assassination brings us Jonathan D. Sarna and Benjamin Shapell’s important study “Lincoln and the Jews.” And the centennial of Saul Bellow’s birth — which is also the 10th anniversary of his death — ushers in a biography of impressive proportions, along with a Bellow nonfiction miscellany.

This idiosyncratic list, emphasizing the first half of the year, could easily have been twice as long. As new caches of documents come to light, books on the Holocaust continue to stream from the presses. Ruminations on Israel and the vexed politics of the Middle East are another publishing mainstay. Our selection this year happens to be particularly rich in short stories and memoir, from the young, the old and even the recently deceased.

More adventures in magical realism from the author of the inventive, Pulitzer Prize-winning novel “Martin Dressler” and the short story “Eisenheim the Illusionist,” which inspired the 2006 film “The Illusionist.”

Shepard, a National Book Award finalist, pens a tragicomic novel of the Warsaw Ghetto, seen through the eyes of a resourceful boy smuggler who must elude capture and spread the news of the ghetto’s fate.

The Bosnian prodigy and winner of the MacArthur Foundation “genius award,” best known for his novel “The Lazarus Project,” imagines the screenwriting aspirations and romantic entanglements of a Chicago ESL teacher named Josh Levin.

Dinerstein’s much buzzed-about debut novel is a fanciful Arctic Circle romance between a Russian immigrant raised in a Brighton Beach bakery and a Manhattanite seeking refuge from family problems in a Norwegian artists’ colony.

In the title novella, Kalfus, a National Book Award and PEN/Faulkner Award finalist, riffs entertainingly on the outlaw sexual proclivities of a financial titan reminiscent of Dominique Strauss-Kahn. Other stories in the collection explore a spell cast by a murderer on death row, the possibility of the end of the world, and the struggles of a young writer.

Sarna, a scholar of American Jewish history at Brandeis University, draws on the Shapell Manuscript Foundation’s collection to document Lincoln’s dealings with his anti-Semitic generals and his support for Jewish equality. A linked traveling exhibition debuts at the New York Historical Society in March.

The centennial of the birth of the Nobel laureate, whose classic novels include “The Adventures of Augie March” and “Herzog,” produces the expected literary bonanza: both a collection of Bellow’s nonfiction and the first volume of a major scholarly biography drawing on previously unavailable documents and new interviews.

The prolific “minimalist” composer describes his peripatetic work history, his creative process, and his collaborations with such diverse talents as Allen Ginsberg, Doris Lessing and Martin Scorsese.

● The Archive Thief: The Man Who Salvaged French Jewish History in the Wake of the Holocaust
By Lisa Moses Leff
Oxford University Press, $29.95, 256 pages
June 12

This quirky Holocaust story is the morally ambiguous saga of Zosa Szajkowski, who after the war stole tens of thousands of documents from French public archives and collections, spirited them to New York, mined them for his own research, and sold them to U.S. and Israeli libraries.

One of Israel’s literary stars takes a nonfiction turn — a biblically-titled memoir about birth, death and grief in the shadow of war and terrorism.

Kumin’s posthumously published memoir details her Depression-era Jewish Philadelphia childhood and her development into a feminist and a much-honored poet of rural life.

Brown, the once-anonymous author of the controversial novel “Hush,” tells the unvarnished story of her coming of age in an illustrious Hasidic family, and her subsequent flight from faith.