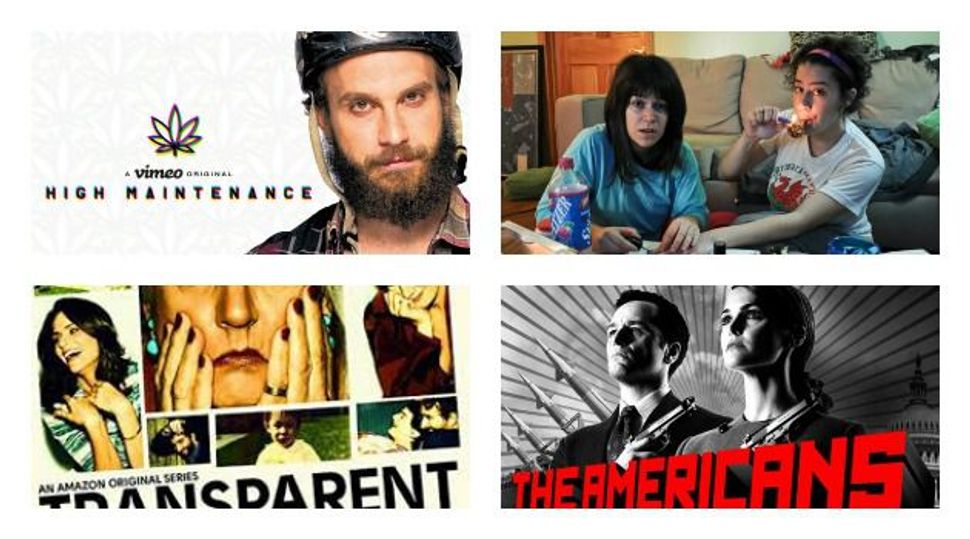 Judaism has never been treated so casually — and by casually I mean as a recognizable and relatable part of American life — as it was last year on American TV. Even though the shows listed below vary in terms of how explicitly “Jewish” they are (“The Americans” is included on the strength of just one devastating episode, for example), they all offer unapologetic reflections of Jewish life in its infinite variety. The anti-assimilationists need never have feared. TV finally reflects what Jews already knew: We’re Americans, but we never stopped being Jews. Our sensibility, humor, curly hair, and questionable family boundaries are everywhere you look on the small screen — with nary a gefilte fish joke in sight. And we’re looking forward to seeing more of ourselves when these shows return in 2015.

With the character of Maura Pfefferman, “Transparent” writer-showrunner Jill Soloway may have provided Jeffrey Tambor with the greatest role of his life (and for fans of “Arrested Development” and the late great “Larry Sanders Show,” that’s saying a lot). When the patriarch-now-turned-matriarch of the mostly lovable, sometimes functional Pfefferman clan wonders out loud “how it is that I raised three people that cannot see beyond themselves,” we share her pain, even as we watch her play an endless round robin of divide-and-conquer with her three grown children. The easy answer would be that selfish parents produce selfish children, but Soloway isn’t interested in easy answers. Rather, she’s interested in transparency itself — how desperately we all want to be seen and loved for who we are, and how one secret begets others, which in turn beget the sort of friction and confusion that can tear families apart. Fortunately, truth also begets more truth, and one of the great delights of this 10-episode dramedy that premiered on Amazon is watching Maura’s children slowly, clumsily, find their way home to each other, all the while bickering over rabbis, allowances, the family house, and missed bat mitzvahs.

FX’s phenomenal ’80s espionage drama, cowritten by former CIA agent Joe Weisberg, tells the hey-it-could-have-happened story of Philip and Elizabeth Jennings, two Russian spies who have spent many years in deep cover as a happy American couple, complete with two American children who have no idea of their parents’ true identities. “The Americans” is as much a meditation on the high price of secrecy as is “Transparent” — but the only “Jewish” thing about it is a short Season 2 storyline about Philip’s violent encounter with a Jewish defector and the Mossad agent assigned to protect him. Philip is by far the most sympathetic character on the show: He is a devoted father, a loving husband, and, when his job requires him to display lethal force, a ruthlessly capable agent. But in the season’s fifth episode, “The Deal,” he also reveals himself to be a fairly nasty anti-Semite. If you’ve ever been unlucky enough to hear the phrase “you Jews” shoot out of the mouth of an acquaintance, or worse, a close friend, you know how hard the words slice. They jolt here, and they should: It’s a controlled, wrenching moment, one that makes Phillip’s actions throughout the episode, as well as the internal price he pays for them, resonate that much deeper. “The Americans” is a consistently brave and thoughtful show. And, as a meditation on the history of anti-Semitism, both in the U.S. and abroad, “The Deal” gives us a chance, if not to forgive, at least to understand.

If Ilana Glazer and Abbi Jacobson, the two writers and stars of Comedy Central’s sitcom “Broad City,” were even one-hundreth as clueless as their on-screen counterparts, they’d never even have been able to helm a broken-down Citi Bike, let alone their own hit TV show. Glazer and Jacobson, “just two jewesses looking to make a buck,” in the words of the Craigslist ad they post in the first episode, don’t need to ever use a single word of Yiddish to embody all of its best untranslatables: chutzpah, meshugenah, and occasionally a heavy dose of shlemiel and schlemazzle. As the two 20-somethings careen through all five boroughs of an indifferent New York City, offending strangers, breaking into houses, stumbling into foursomes, and desperately seeking entry into a gilded city that has no time for their loose change and looser morals, Jacobson and Glazer get their best laughs from a particularly millennial predicament: How are these two members of the most pampered and entitled generation in American history going to survive an economy that’s got no chance of yielding what they think they’re entitled to? According to “Broad City,” they’ll have to get by with a little help from their friends, and a lot of help from their pot dealer.

The girls of “Broad City” probably couldn’t afford the help of the pot dealer known only as “The Guy” in the web-only series “High Maintenance.” His clients are the kinds of people who can afford home delivery, mostly upper-middle-class New Yorkers who all smoke for different reasons: recreation, procrastination, and in the series’ most poignant episodes, several variations of pain management. The Guy makes a very special cameo in the Passover-themed episode “Elijah,” which features an embattled family seder, one where all the knives are out, in which the kindest son finds himself singing “Please stop fighting/ please stop fighting/ you’re ruining the whole night” to the tune of Dayenu. It’s a prayer as much as a song, one from which no Jewish family has ever been exempt, and The Guy’s almost divinely inspired appearance at the house may be the closest this particular group will come to finding redemption. We’ll avoid spoilers, though we should warn more sensitive readers that, like most of its other episodes, “Elijah” is extremely NSFW. It’s also the most explicitly Jewy of the show’s series of vignettes that are only as Jewish as New York City itself, which is to say — very Jewish indeed.

It’s worth both noting and celebrating the fact that of the four series listed above, two are only available online and the other began as web series. Well before 2014, visual storytelling had begun to free itself from arbitrary distinctions between TV, film, and the web. Is TV the new cinema? Are movies dying? Will online video liberate directors from the shackles of Hollywood, or bring down the whole industry? We shouldn’t expect answers to any of these questions in 2015, but we also shouldn´t need them, since what matters most is that the stories themselves just keep getting better and better.

Sheerly Avni writes frequently about movies and pop culture for the Forward.