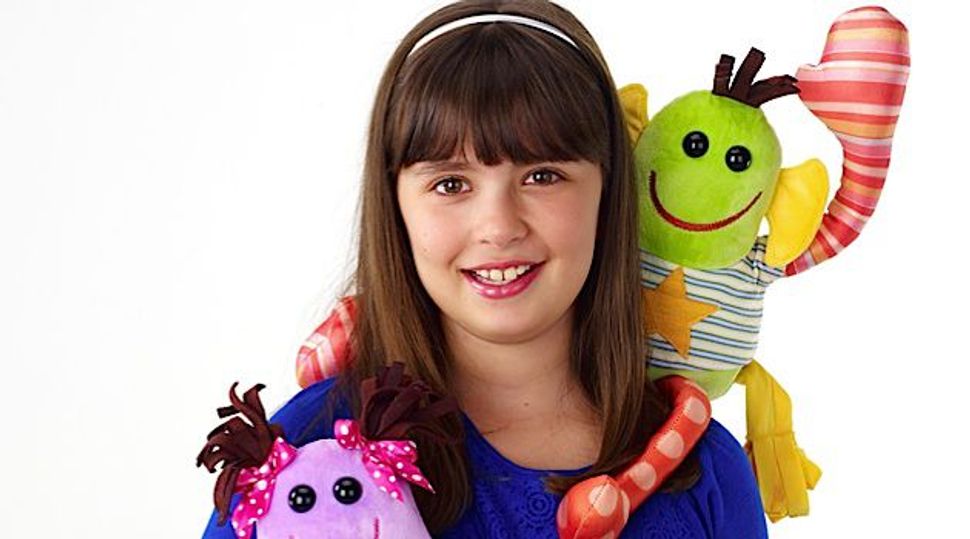 Lyla, a soft-spoken 8-year-old from the Astoria neighborhood of Queens, is the inventor of the Lyla Tov (Hebrew for Good Night) Monster, a plush happy-faced, pear-shaped stuffed toy that just won her the prestigious TAGIE award for young inventor of the year. Beating out hundreds of fellow inventors, Lyla took the stage in Chicago on November 21, accepting the award in front of 400 toy and game insiders from over 23 countries.

Dressed in a shimmering blue taffeta dress and barely taller than the podium, the generally shy young girl appeared undaunted by the audience, and gave a memorable acceptance speech in which she thanked her “family, friends, teachers and Kickstarter backers” and expressed her joy in giving “a good night sleep to kids all over the world.”

The oldest of four children, Lyla has always loved spending time in her imagination, a place brimming with fantastic landscapes and people. Five years ago, her mother, Erin Slattery Black, a two-time Emmy Award-winning costume designer for the Muppets, asked her to think of a Hanukkah gift for her father. Saying nothing, Lyla took a piece of paper and a crayon and drew an oval with two legs, two stick arms, a few hairs, and giant eyes. Then she handed it to her mother. “That,” she said, pointing to the image, was what she wanted to “get” her father for Hanukkah.

“That?” her mother asked.

The little girl nodded: “Yes. Can you make it real?”

Now, sitting cross-legged on the couch at her home in Astoria, Lyla looks at her mother then at me, and begins to chuckle at the memory: “I drew it because I wanted my dad to have a good night sleep with no monsters,” she says.

“Were there monsters in his sleep?” I ask.

Charmed by her daughter’s ingenuity, her mother says she was happy to indulge the wish. “I told her to choose some fabric for the body, arms and legs and decide what color she wanted the eyes.” Then, with her daughter by her side, she began to cut, pin, stuff and sew to “make it real.”

Within hours, the little oval figure with its dangling extremities became complete. “My dad was so happy, and so was I because no monsters would bother him while he was sleeping.”

Indeed, the tiny yellow stuffed animal proved to be the harbinger of a good night’s sleep, and Lyla’s dad, Eric Black, was struck with an idea: to make more so everyone could have a good night’s sleep. But Lyla had no interest in crafting more monsters, that is, until the following year when she turned 4 and wanted to join her mother selling crafts at a local fair in Sunnyside, Queens.

Using the original design, Lyla and her mother made 20 monsters, 10 boys and 10 girls — the girls wore tutus, and the boys wore T-shirts. For days, the living room became a mock factory, and at any given time, someone could be found cutting or sewing or stuffing.

“And, then we had to name them,” Lyla says, grinning impishly.

“Yup,” she tells me, uncrossing her legs and shushing her 3-year-old sister, Tessa, who’s tugging at her to make a sticker collage.

The stuffed little monsters, made to keep away the bigger monsters, were a hit, selling out within hours. “It was the craft fair where things really began to take off,” her mother says. “Lyla realized that her work could earn her money, and she was excited.”

Her parents, believing that starting a small family business making the monsters could benefit their daughter in more ways than pocket money, were ready to commit to the project. “We saw it as an opportunity to do something together and also as a way to teach Lyla about earning money, saving money, and giving back,” her mother explains.

Lyla and her family have made over 700 monsters in their home. Since the first 20, Lyla has been giving a percentage of the earnings to a charity of her choosing, which she researches with her dad. So far, Lyla has given to The Floating Hospital, an overseas orphanage, and the National Institute for Cerebral Palsy; last year, she gave to Dancing Dreams, a nonprofit organization that teaches dance to physically and medically challenged girls.

“I choose the charities because they mean something. I like to dance, so last year I chose Dancing Dreams. The money helped them to buy costumes, and when I went to the show, it was fun to see them dancing in the costumes,” Lyla says.

With over a thousand Lyla Tov monsters tucked beside sleeping children and a national toy award, Lyla’s future looks bright. But whatever the future may hold, it’s certain that she will approach it with dignity and grace and all the sincerity that embodies the spirit of a young girl trying to make the world a better place. “I love giving. It makes me feel good, like I’m connected,” she said.

Maria Smilios is a regular contributor to Narratively. She lives in Astoria, Queens.