Undermining Nazi Ideal of Racial Purity — in Black and White 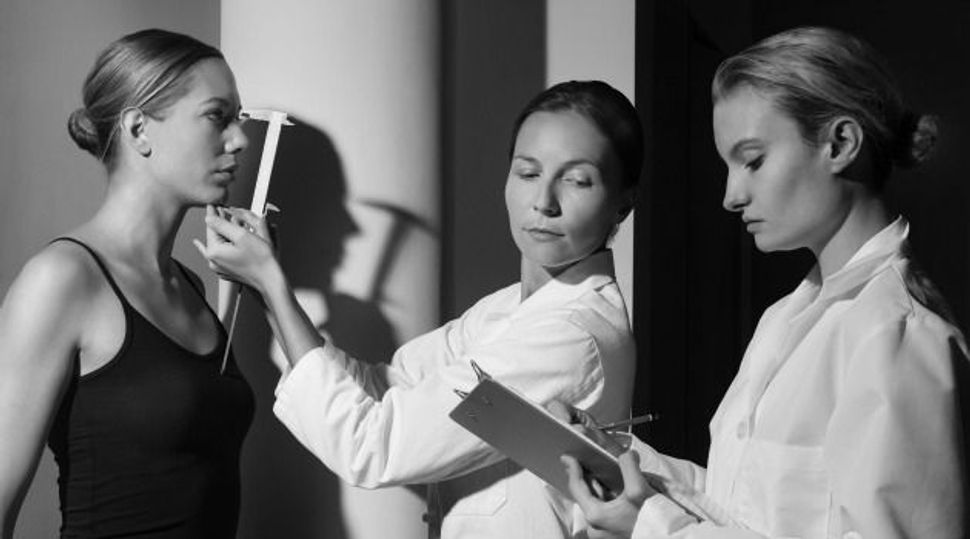 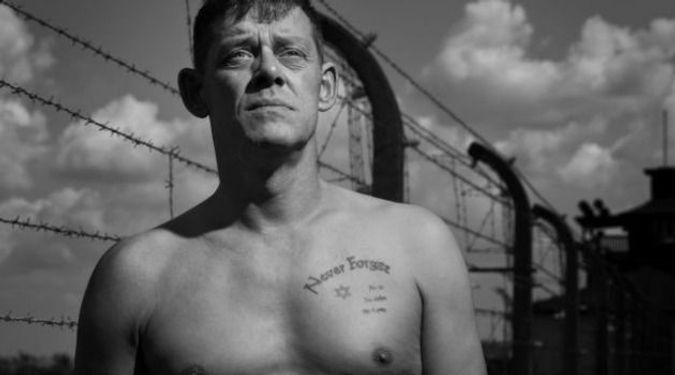 Look of Evil: Rainer Hoess, grandson of Rudolf Hoess, the commandant of Auschwitz, at the barbed-wire fence of Buchenwald concentration camp. Image by marc erwin babej

(Haaretz) — Rainer Hoess, the grandson of Rudolf Hoess, the Kommandant of Auschwitz, stands at the barbed-wire fence of Buchenwald concentration camp. The tattooed numbers belong to Auschwitz survivors who have become friends over the years.

Aminata Belli, a German woman who looks more African than Aryan, poses outside the 1939 monument glorifying German colonialism in Africa, located next to the former Lettow-Vorbeck barracks in Hamburg. 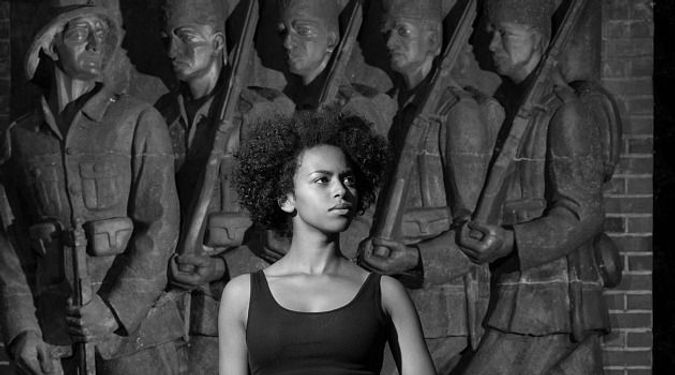 And outside the “Torch Bearer” monument at the former Nazi Elite School Vogelsang stands the German actor Robert Dölle, looking every bit the frightening fascist with his bald head and black leather Waffen Elite coat favored by the Gestapo.

The only thing is that his origins are 94 percent European Jewish, 2 percent Middle Eastern and 2 percent Caucasian (the remainder comprises trace amounts of other ethnic origins.) He also happens to be the photographer’s cousin. 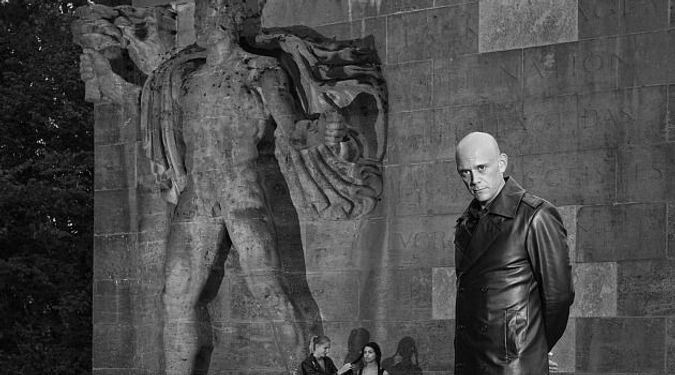 That photographer is Marc Erwin Babej, a born-and-bred German living in New York who has just completed a series of thought-provoking images called “Mischlinge” that are purposely meant to stretch and strain the definition of what it means to be German today. Babej’s exhibit of 60 photographs, many of them shot on the grounds of Nazi-era war monuments and Third Reich training schools and retreats, are deliberately shot with an aura of Leni Riefenstahl, the photographer and director who made one of the Hitler’s most notorious propaganda films, “Triumph of the Will.”

In a Skype interview, Babej explains why the iconic but twisted work of Riefenstahl was the reference point he had in mind from the start, and which he wanted to reference as part of the exhibition.

“The idea was what would it look like if I took Germans of today, many of whom don’t look German, and photographed them in the style of Riefenstahl? And what if we do that and set them in monumental architecture from the Nazi era? My next thought is that it shows Germans today in this uneasy coexistence of past and present, and so what if in addition to that I submitted them to an ethnicity test? So I came up with the idea of testing everyone’s DNA and doing that and publishing the results along with the pictures,” he explains, noting that each person who was photographed was asked to spit into a vial and submit it for testing, so that their DNA results could be included in the captions accompanying their photos. 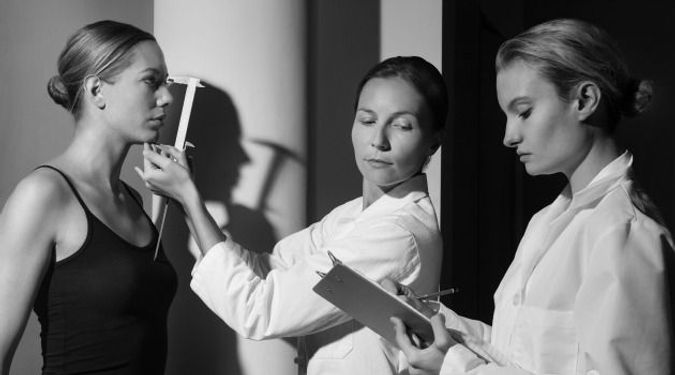 “The sum total would be a parallel universe in which the issue of German identity would be made visible. And I was just curious if all that would communicate visually, and as to what that would look like.”

That curiosity has been with him almost as long as he can remember, or at least since age 8 or 9, he says, when he learned with some mixture of fascination and horror about Nazi Germany’s infamous “Mischlinge” categories set up by the Nuremberg Laws. These declared that having even one Jewish grandparent made you a mischling – literally, a mongrel. “It’s a very loaded word and I’m using it very intentionally,” he says.

Babej’s own mother is a Holocaust survivor: She was seven years old when the war ended, and had been interned for several years with her mother in the Theresienstadt concentration camp. The fact that Babej’s grandmother was a physician kept her from being deported to the death camps further east. After the war the family remained in communist-ruled Czechoslovakia; they defected in 1965 and moved to West Germany.

Babej, born in Frankfurt in 1970 and raised in Bad Homburg just north of Frankfurt, grew up feeling both Jewish and German, a sometimes uneasy mix. At 16 he left for boarding school in America, then went to Brown University, and has lived in New York City ever since.

Showing up in Germany and asking to pose subjects in front of monuments and former Nazi headquarters was a strange and storied venture.

“Getting permission to photograph this was a challenge,” Babej explains. “The authorities are rightly afraid that neo-Nazis will take advantage of these places to do a propaganda shoot. I had to explain that I’m Jewish and the son of a survivor. And I’m also a German – I’m not just out to make Germans look bad. But to take two Germans dressed in bikinis and say, I’d like to pose them front of your V-2 rockets – well, people had to work on getting comfortable with that. But in the end everyone I asked got behind the idea, and as it turns out, the work will be exhibited in many of the locations where it was shot.” 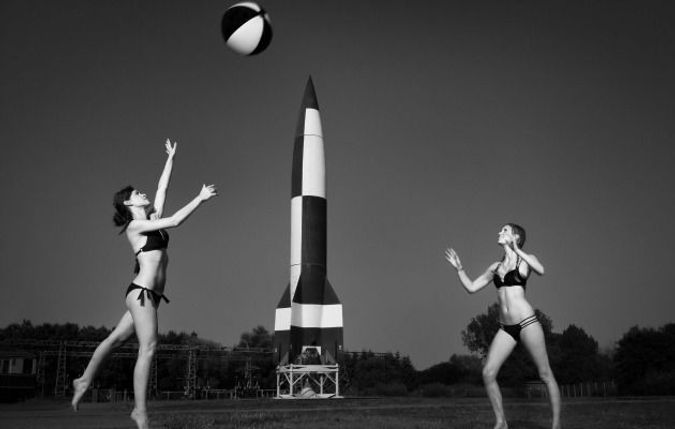 These include the museums at the former Nazi party training school at Vogelsang, at the former SS Castle Wewelsburg, at the Peenemünde Historical Technical Museum and Dokumentation Obersalzberg, in Hitler’s alpine retreat.

One of the many things that makes the project so unusual is that it’s not just about posing today’s Germans against the backdrop of the Nazi past, but demonstrating just how multi-ethnic Germany has become. And was, naturally, during the Nazi era as well.

“Through the DNA tests I confront people with the fact that none of us are so ethnically pure, so why are some people still obsessed with the fiction of ‘German blood’? What should define Germany are liberal democratic values, not ethnicity,” he says.

Babej got a masters degree in journalism from Columbia University and then went on to work as a marketing strategist. He writes a marketing column for Forbes and an art column for Der Spiegel. But he is relatively new to the arts photography scene, being largely self-taught aside from working with the photographer Roger Ballen, his “friend and mentor.” Part of what makes the images so artistically sharp and chilling was his choice of cameras, which paired up the body of a top-flight digital camera with a lens that could have been used in Riefenstahl’s day.

“I shot it with a digital B&W Leica M Monochrom – it has no Bayer filter so you get more sharpness, more light sensitivity … I used for most of the work lenses from the time that Riefenstahl did her work. It essentially means combining 85-year-old lens designs with contemporary digital technology.”

What emerged are photos that have what he describes as a “hyper-heroic, quasi-fascist aura,” images that play with our sensibilities, leaving us unsure of whether we want to laugh or recoil. That, says Babej, is part of the idea. “The point is for people to have enough cognitive dissonance to start thinking.”

Marc Erwin Babej’s “Mischlinge” will premiere from Jan. 24 until Feb. 28 at m2a Galerie in Dresden.

Undermining Nazi Ideal of Racial Purity — in Black and White