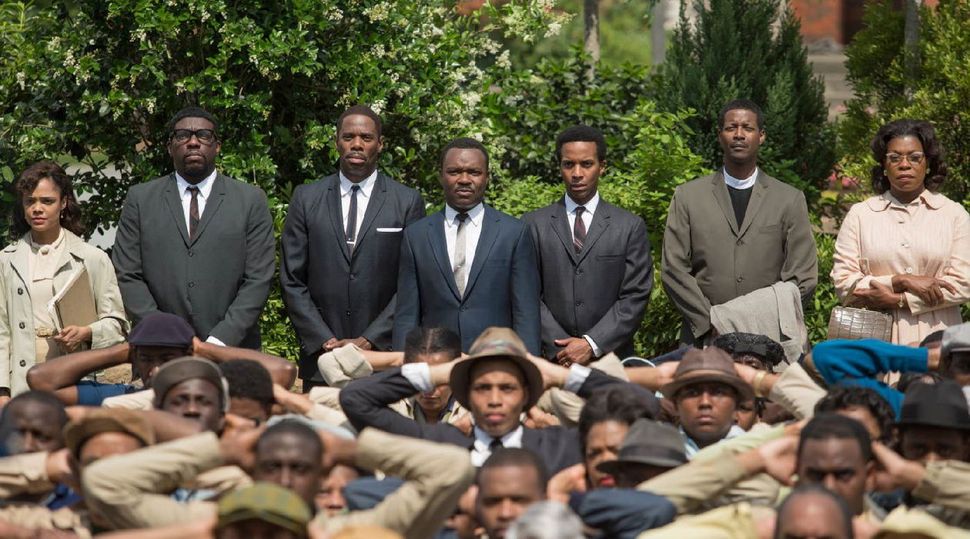 50 Years Ago: Ava DuVernay’s new film arrives on the 50th anniversary of the civil rights marches of 1965. Image by selmamovie.com

When filmmakers choose what to include or exclude from the stories they tell, their choices often have repercussions beyond the drama on the screen. In films based on real-life events, omissions can seriously distort the way we remember the past. “Selma,” a film directed by Ava DuVernay, offers an ambitious portrait of Martin Luther King by zeroing in on a pivotal moment in the black voting rights struggle. The negative way in which President Lyndon Johnson is portrayed has already sparked significant controversy, but the narrative strategy of the film leads to a glaring omission that has not yet surfaced: the contribution that thousands of white people, many of them Jewish, made to the Civil Rights Movement.

The film arrives on the 50th anniversary of the Selma to Montgomery, Alabama, marches, with Oprah Winfrey as one of its lead producers. The screenplay, by Paul Webb, reveals Dr. King’s media savvy, as he embraces the Selma setting as one most likely to cause confrontation and result in wide coverage. In another scene, we witness the doctrinal and tactical splits within the civil rights movement between the Student Nonviolent Coordinating Committee and Malcolm X. Most powerfully, we watch the unfolding of Bloody Sunday, March 7, 1965, when the marchers are attacked by the Selma police on the Edmund Pettus Bridge.

The marchers are turned back to return another day. It was in fact a day of heroism in the face of brutal oppression. But those marches actually built on momentum generated by thousands of local efforts during the preceding months and years. Among the most significant were the 1964 Freedom Rides, in which well over a thousand volunteers, mostly white, and over half of them Jewish, risked their lives riding into Mississippi to face intimidation and harassment that included arrests, beatings, and murder. Among those providing support for the coalition of the Mississippi branches of the four major civil rights organizations were volunteers from the Medical Committee for Human Rights, the American Civil Liberties Organization, and Christian and Jewish clergy and divinity students recruited by the National Council of Churches, who provided traditional religious support while also engaging in protests, recruiting voter applicants, and going with them to register.

National outrage after the murder of the black Mississippian James Chaney, and two Jewish New Yorkers, Andrew Goodman and Michael Schwerner in June of 1964, helped lead to passage of the Civil Rights Act. I can still remember the day I learned that their bodies had been found. I wept for the young men I didn’t know, for all the Freedom Riders, and for my country, a place where such a thing could happen.

The American legacy of slavery, Jim Crow, and segregation is a wound so deep it may never fully heal. The constant efforts to de-legitimize President Barack Obama underlines this country’s entrenched racism. Current events like the failure to indict white police officers in the deaths of unarmed black citizens have outraged many. As a white person, I can barely imagine the daily indignities, humiliations, and dangers black Americans routinely faced 50 years ago and often face today, even though, as a woman and a Jew I have personally experienced some discrimination.

The struggle for African-American civil rights was primarily one led and suffered by black Americans. Some black activists may have felt embittered because the national media turned its full attention to black suffering only when white students were killed. Nevertheless, white contributions to the ongoing war against discrimination should be noted.

The black-Jewish relationship is complex, with many changes over time, but the historical record is clear. One of the founders of the National Association for the Advancement of Colored People (NAACP) in 1909 was Henry Moskowitz. According to the Religious Action Center of Reform Judaism, Jewish philanthropy was responsible in whole or in part for the founding of more than 2,000 primary and secondary schools and twenty black colleges (including Howard, Dillard and Fisk universities).

But white and specifically Jewish involvement in the Civil Rights Movement went far beyond institution-building fund-raising. Arnie Aronson was an important organizer of the 1963 March on Washington where Rabbi Uri Miller recited the opening prayer and Rabbi Joachim Prinz spoke before Dr. King’s historic “I have a dream” speech. The civil rights confrontations in St. Augustine, Florida, came to a head in the spring of 1964, when three wives of Episcopal bishops joined northern college students to take part in civil rights activities, during which Dr. King was arrested. From jail, he wrote to his friend, Rabbi Israel Dresner in New Jersey, urging him to recruit rabbis to come to St. Augustine, resulting in a huge mass arrest of the rabbis who responded.

In the new film, Dr. King makes a dramatic appeal to people of all races and religions to come and join him in Selma. Hundreds do, as though for the first time, and Dr. King is shown embracing a Greek Orthodox priest. Also visible among many whites is a Catholic priest and a minister. This is a deeply moving and dramatically effective scene. But I looked in vain for the embrace of a man with a yarmulke, a scene that would reflect the historical moment when Dr. King marched with Rabbi Abraham Joshua Heschel, a leading Jewish theologian and philosopher widely respected beyond the Jewish community. He may be present in the grainy documentary footage at the end of the film, but he is not visible in the body of the film, nor are any other Jews openly recognized.

We can only marvel at the courage of everyday black Americans as they joined with Martin Luther King and other black activists to take on the bigots who would deny them their rights during the Civil Rights Movement. But there were many Jewish and other white Americans who supported them before, during, and after the marches from Selma to Montgomery, and “Selma” misses a great teaching moment by excluding them.

Leida Snow has worked for major Jewish organizations and has an extensive media and political background. Her website is www.leidasnow.com