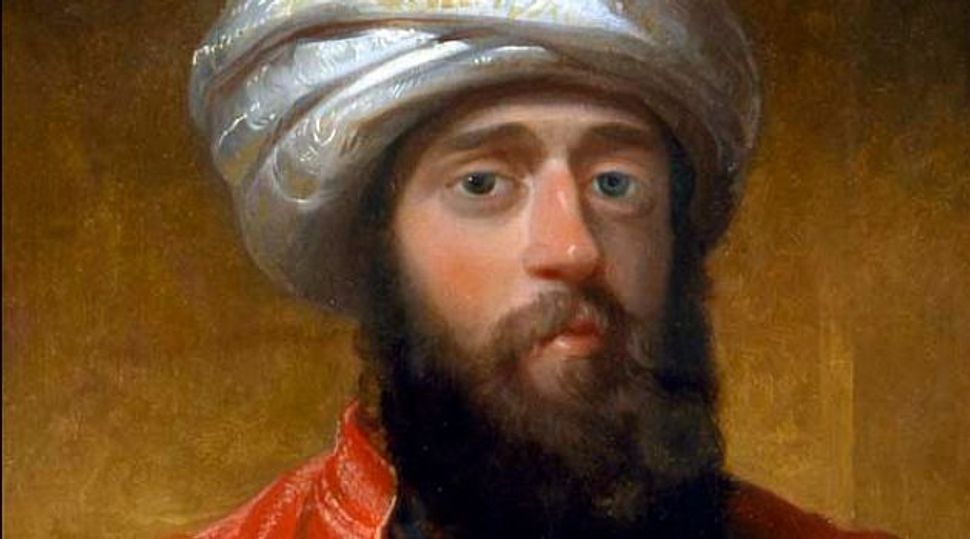 A new exhibit at the Jewish Museum of Maryland sheds light on the experience of Jews in 19th-century America, through the lens of one man who saw and did it all. Colonel Mendes Cohen — who was born in Richmond, Virginia in 1796 and settled in Baltimore, then the country’s third largest city, at the age of 12 — is a well-chosen exemplar. His father was German and his mother was English, and when the family arrived in Baltimore there were only about 150 Jews in the city and no formal Jewish institutions.

The interest of “The A-Mazing Mendes Cohen” is documentary rather than artifactual: There are a few pieces of tableware from the Cohens’ home on display, but most of the one-room exhibition consists of kid-friendly historical factoids arranged into a confusing maze of pea-green tarp.

The exhibit is broken into two parts. The first offers a bird’s-eye primer on 19th-century history that corresponds to Cohen’s life chronology: historical milestones abroad (Waterloo, the Crimean War), technological advancements (from gaslights — the Cohens’ was the first private home in Baltimore to have one — to steam locomotives), political movements (from the European revolutions of 1848 to the rise of the anti-immigrant Know-Nothing party in America), and of course Jewish historical events (the election of Benjamin Disraeli; the publication of Karl Marx’s “On the Jewish Question”; the 1845 election of the first Jewish-born senator, and, that same year, the arrival in Baltimore of the country’s first ordained rabbi).

If the historical sweep of the first half seems to cover too much ground, the reasons why become evident in the second half, which more closely tracks Cohen’s picaresque life. As the exhibit’s tagline has it, “Mendes was there” — and how. He was one of a handful of Jewish American soldiers at the Battle of Baltimore in 1814, defending Fort McHenry against the British while, in a ship across the harbor, Francis Scott Key scratched out “The Star-Spangled Banner.” Cohen and his brothers went on to open a profitable lottery business; in their capacity as ticket-sellers, they had a case taken all the way to the Supreme Court. In 1821, the brothers lost Cohens v. Virginia, which asserted the federal government’s right to review and, if necessary, overturn state Supreme Court decisions. 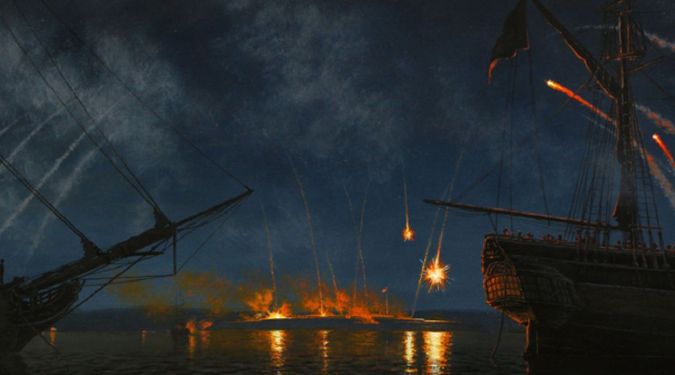 He Saw It All: Mendes Cohen was one of a handful of Jewish American soldiers who defended Fort McHenry against the British in 1814’s Battle of Baltimore. Image by Jewish Museum of Maryland

The exhibition also uses Cohen’s story to track the painstakingly slow fight to pass Maryland’s so-called Jew Bill. In the early 19th century, a Jew could be elected to the presidency but not to Maryland state office, since Maryland’s oath required a declaration of Christian faith. It wasn’t until 1826, after 30 years of rallying, that the “Act for the Relief of Jews in Maryland” became law. The next year, Cohen’s brother was elected to the Baltimore City Council. (Twenty years later, during his single term in the Maryland General Assembly, Cohen voted with a pro-slavery faction to condemn Pennsylvania for protecting runaway slaves from their former owners.)

In 1829, the 33-year-old Cohen retired from the lottery business and embarked on a six-year journey through Europe in the Middle East, and this is where his story gets really interesting. While on the road, he stopped in London for the coronation of William IV in June 1830 and the funeral of King George IV that August. He made it across the Channel right after the Paris student revolts had died down, and stayed to attend the coronation of Louis Philippe in September. The next year, he met with Pope Gregory in Rome, then spent several months touring the holy sites of Israel. After an extended visit to Egypt, which he spent traveling along the Nile and collecting antiquities, Cohen returned to Baltimore in 1835, only to go back to England three years later to represent Maryland at the coronation of Queen Victoria. The exhibit goes to great lengths to remind young visitors what an epic schlep that must’ve been at the time.

Despite excerpts from his letters, “The A-Mazing Mendes Cohen” offers visitors little sense of its star’s personality, and the exceptionally terrible actor who narrates the introductory video as Cohen does little to correct this. (This cringer of an impersonation is the only real failure of the exhibition, which otherwise makes up for a limited budget with great historical legwork.) We learn that he was a “confirmed bachelor” who lived with his mother and brothers into adulthood — perhaps, the placards speculate, because there weren’t a lot of eligible Jewish ladies in early 19th-century Baltimore. Later in life he receded into generic éminence grise-dom, working in politics (as aide to Governor Thomas Veazey), serving on boards (including those of the B&O Railroad and the Hebrew Benevolent Society), and telling strangers about the Battle of Baltimore. He died at 84 in 1879.

Forget the National Aquarium: The Cohen exhibit — along with the museum’s permanent exhibit, “Voices on Lombard Street,” which looks at the “century of change” that roiled the surrounding streets of East Baltimore — makes the Jewish Museum of Maryland a must-visit for tourists to Baltimore. Better yet, the third-oldest synagogue in America, which contains what many believe to be the oldest mikveh in the country, is right next door, with its deceptively New England Anglican columned exterior facade. Taken all together, these distinct offerings give a long-ranging look at a city that has long been shaped by its Jewish residents.

Laura Moser is a Washington, D.C- based writer and critic.