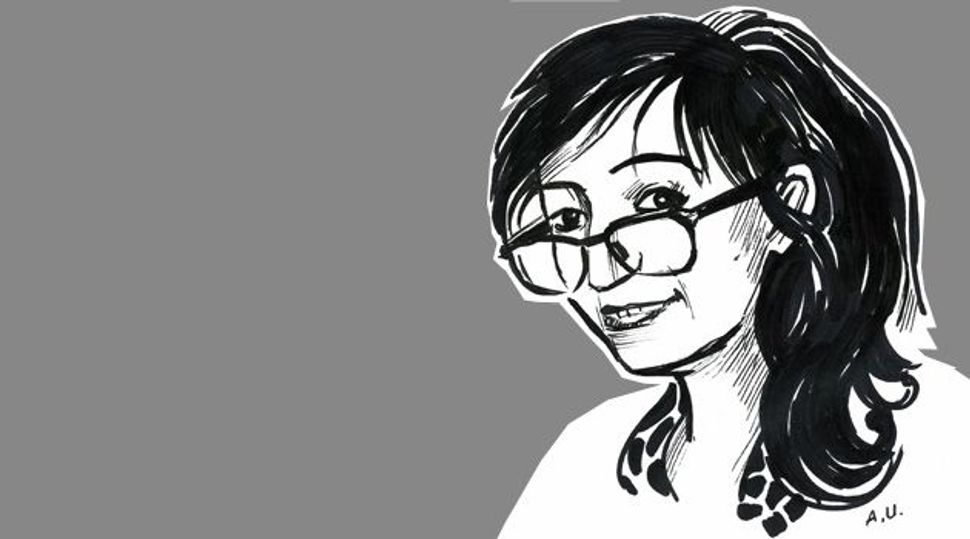 Je Me Souviens: The Charlie Hebdo massacre claimed the life of French Jewish psychoanalyst Elsa Cayat who wrote a column for the satirical publication. Image by Anya Ulinich

In a nervous, jittery country where one in three people pops psychotropic pills, Elsa Cayat, the French Jewish psychiatrist and psychoanalyst who was murdered in the Charlie Hebdo offices on January 7, was among France’s calming influences. In such books as “Desire and Whore: the Hidden Stakes of Male Sexuality” and “A Man + a Woman = What?, Cayat, who will be buried in the Jewish section of Montparnasse cemetery on January 15, tried to get past preconceptions and understand the mechanics of love-hate relationships. She also contributed chapters to “Mastering Life” and “Dangerous Childhood, Childhood in Danger?”, yet none of these proved as fateful as her twice-monthly column, “Charlie Couch,” in “Charlie Hebdo” (Hebdo is an abbreviation for hebdomadaire, or weekly). There she wrote about topics including parental authority, the “birth of the Holocaust,” and her last article for the January 7 issue of the paper, “Christmas is really a Pain in the Ass.” (Noël, ça fait vraiment chier.)

Of Tunisian Jewish ancestry like her fellow victims the cartoonist Georges Wolinski as well as Yoav Hattab, Yohan Cohen, and François-Michel Saada, three of the four murdered shoppers at the Hyper Cacher kosher supermarket, Cayat had received anonymous phone calls calling her a sale juif (filthy Jew). The callers threatened to kill her unless she stopped working for “Charlie Hebdo.” This led her cousin the filmmaker Sophie Bramly to tell CNN that because Cayat was the only female victim of the attacks at the journal, her death might have been linked to her Judaism. Reported claims that the attackers at “Charlie Hebdo” took care to identify exactly whom they were killing later proved to be incorrect. According to survivors of the attack, the trained killers were rapid and did not distinguish among the people they shot with high-powered weapons, so it is unlikely that Elsa Cayat was killed for being Jewish. Nor did she have time to speak to her assailants on a professional basis.

Brigitte Samama, a Jewish psychologist, told “La Croix” newspaper that in her view the killers were not madmen as the popular press termed them: “These men aren’t mad. I treat mad people in my office who aren’t dangerous. No, these are psychopaths, which is no excuse. This isn’t a matter of religion for me, it’s the same blind hatred as in the slaughter of Jews by [Mohammed Merah in Toulouse] in 2012.”

Among the workers killed indiscriminately were a janitor and proof-reader, and Cayat. The statement “We don’t kill women,” reportedly made by one of the killers to a female employee whose life was spared, was unreliable. Clarissa Jean-Philippe, a female police intern originally from Martinique, was likewise killed in the Paris suburb of Montrouge by an associate of the two gunmen who later took hostages at the kosher supermarket.
Born in 1960, Cayat kept a professional office on avenue Mozart in Paris’ ritzy 16th arrondissement. Among her patients there was the novelist Alice Ferney, who recalled to “La Croix” newspaper how Cayat would observe: “Only two fellows told us stuff, Freud and Lacan. The others repeated them.” Ferney added that Cayat was “radical and open, and also she laughed.” Another patient told “Marie France” magazine, that Cayat was a free, dynamic, combative woman. She feared nothing… she smoked during sessions, and sometimes wore jeans with holes in them.” Yet another patient informed “Paris-Match”: “She wasn’t a smooth woman. She could be a bit harsh and push you into a corner.”

Cayat’s aunt, the author Jacqueline Raoul-Duval (born Lily Khayat-Bonan in Sfax, Tunisia) stated to “Elle” magazine that Cayat was “perhaps the strongest woman I know, the most attentive to others, the warmest.” Raoul-Duval recalls that Cayat expressed admiration for the editors of “Charlie Hebdo,” also killed: “What talent and courage, with no caution restricting their will, their impatience to denounce stupidity, bigotry, and exclusion.” Cayat likely approved of how Wolinski, at age 80, suffering from heart and prostate problems, braved death threats to attend office meetings at Charlie Hebdo. Wolinski informed friends that he had already lost too many friends and had no desire to be the last survivor of his group. Wolinski specifically noted that he did not wish to survive his colleague Cabu (Jean Cabut), at 76 still a joyously youthful creative spirit who had watched his son Emmanuel Cabut, who won fame as the singer Mano Solo, die of AIDS. Cabu and Wolinski, with or without advice from Cayat, faced facts of mortality and boldly disregarded imminent threats with raucous laughter, just as she did.

As fond of puns as was Jacques Lacan, the French psychoanalyst who inspired her, Cayat also was a constant presence in “Psychologies” Magazine. There she animated an online chat where one reader asked why all her relationships ended after six months. Exultant and interventionist as usual, Cayat replied concisely: “Maybe your answer is contained in the question. Six mois (Six months) = if I… (si moi). Playing on homonyms in French, the term for six months coincides with the speculative query “if I,” questioning any love affair. To another reader who asked if it was possible for partners to love each other equally, Cayat replied confidently: “No, it’s not possible. But then, why should it be exactly equal? Love is a fluid, mobile emotion that moves according to the time and circumstances but is basically there. Because it’s easier to love than to hate.”

The problems of world terrorism remain unresolved, yet at least the millions of people who marched in France and other countries in response to the Charlie Hebdo tragedy found it easier on that day to love than to hate.