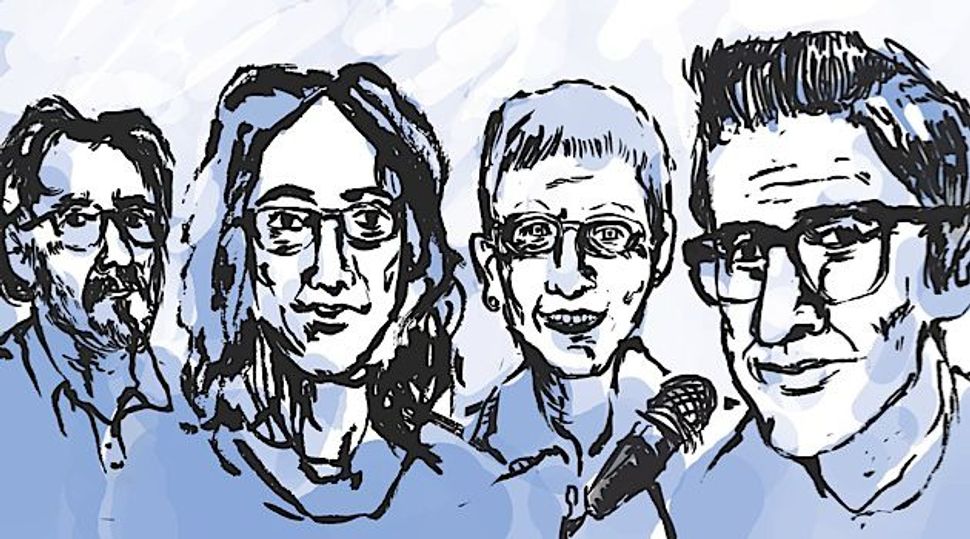 Don’t believe me? Put away your mah-jongg, grandma, because today we’re counting Jews.

You might object: These are all public radio hosts whose already popular shows get posted online, where they continue to be popular. And we already know that Jews are vastly overrepresented on public radio, where it can be hard to find an edition (weekend or morning) without a Jewish host. So maybe Jews just dominate public radio, and there’s no podcast-specific phenomenon here?

Yet the Jews-and-podcasting thing goes beyond the transplanted public radio shows. There’s Marc Maron (“WTF”), whose interview with comedian Louis C.K. was just named the greatest podcast episode in the decade-long history of the medium. And, of course, there’s Sarah Koenig, host of “Serial,” the true crime “This American Life” spin-off that was the biggest thing on the Internet in late 2014.

Plus: Slate’s “Political Gabfest” trio, the granddaddies of roundtable podcasting, is two-thirds Jewish. Stella alum Michael Ian Black of the underappreciated “Mike and Tom Eat Snacks” is Jewish. Mike Pesca, the force of nature who hosts Slate’s daily podcast “The Gist,” has a Jewish mom and an Italian dad. Alex Blumberg, host of “StartUp,” which chronicles the launch of his new podcast company, has a Jewish dad; so does Alex Goldman, co-host of “Reply All,” which is published by Blumberg’s company.

One could go on.

That’s not to say that these are Jewish podcasts, or that they are interested narrowly in Jewish topics. (Marc Maron, at times, is an exception — but he talks about Jewishness in such clichéd terms that it can be awkward to listen.) It’s a golden age of Jewish podcasters, then, but no golden age of Jewish podcasts. More E.L. Doctorow or Norman Mailer than Philip Roth or Saul Bellow: You’re pretty sure they’re Jewish, but you have to Google them to check, because they don’t talk about it much.

The Jewish podcast category in the iTunes store is sad — It features Chabad, Messianic Jews, lots of rabbis. Tablet Magazine’s excellent Vox Tablet, hosted by Sara Ivry, is an exception, and I’m sure it’s not an oversight that it isn’t categorized as Jewish on iTunes.

So what does it mean that Jews dominate podcasting? As they say on that Wisconsin Public Radio show and podcast “Whad’Ya Know?”, hosted by Michael Feldman (also Jewish!): “Not much!”