Why People Leave Orthodoxy — and How 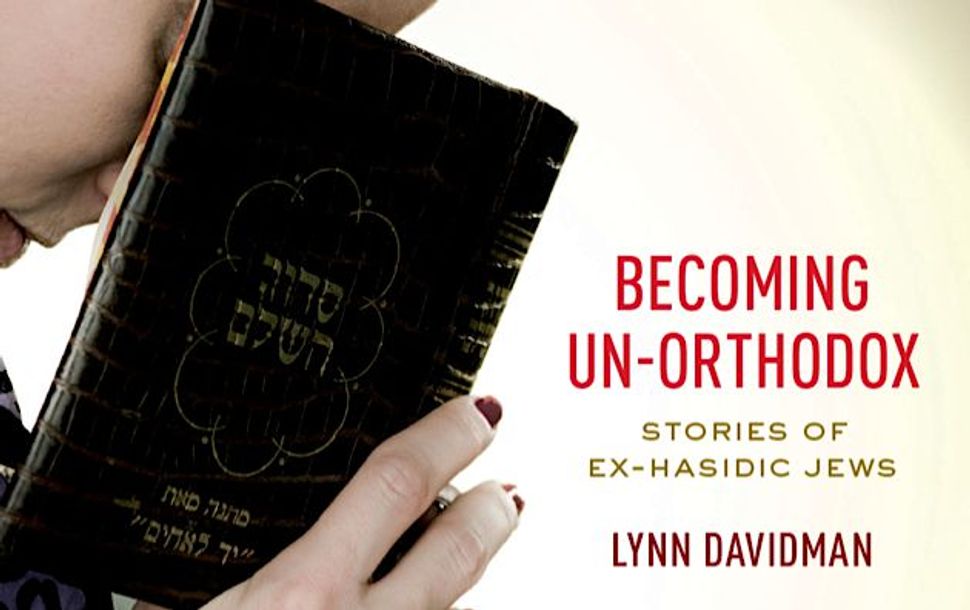 In “Becoming Un-Orthodox,” a study of ex-Orthodox Jews by University of Kansas professor Lynn Davidman, a woman identified only as “Leah” describes Friday night meals in her parents’ home. “Shabbes was kind of a wash,” she says.

“My father was always tired and so was my mother. They were fighting. We were fighting. And so there was not that kind of love and joy that makes the brainwashing really stick.”

This description of a Friday night dinner as a form of brainwashing won’t go over well with Orthodox readers, for whom Sabbath meals are a point of religious pride. But it does speak to one of the most pressing issues facing Orthodox Judaism: Whether you consider a religious upbringing to be a kind of brainwashing or not, why are there so many cases where it doesn’t stick?

Davidman, whose previous books include “Tradition in a Rootless World,” a study of women who chose to become Orthodox, claims here that “there are no books analyzing people who leave Haredi communities.” And indeed, “Becoming Un-Orthodox” is the most academically rigorous treatment of the subject so far. But it also follows books like Hella Winston’s “Unchosen: The Hidden Lives of Hasidic Rebels” (2006), which was a similar secondhand account of Orthodox defectors, as well as the many memoirs and works of fiction by ex-Orthodox authors. There have also been several books on the subject from the Orthodox point of view, which are written as preventative guides.

While the academic sophistication of “Becoming Un-Orthodox” distinguishes it from previous books, the form has its drawbacks. Like many academics Davidman is repetitive, and she uses jargon unnecessarily. In one absurd instance she credits sociologist Samuel Heilman with the term “lernen,” which is simply Yiddish for “to learn.”

But the scholarly underpinnings of the book are also its strength. For “Becoming Un-Orthodox” Davidman interviewed some 41 women and men between the ages of 25 and 45 who defined themselves as ex-Orthodox, a larger group than has been looked at before. Most important, Davidman provides a theoretical framework for her interviews and anecdotal findings, which are invaluable to understanding the ex-Orthodox phenomenon as a whole.

“Becoming Un-Orthodox” is divided into five sections, in which Davidman outlines the phases of Orthodox defection: “Tears in the Sacred Canopy” (that is, initial sources of unhappiness and disillusion); “First Transgressions”; “Passing”; “Stepping Out”; and finally, “You Can’t Turn off Your Past.”

Davidman also has her own story to tell. By the time she was 13, she writes, “I knew in my gut I had left Orthodox Judaism.” The impetus for her was the death of her mother from cancer, which no blessing from any rabbi could prevent, and which constituted a “major biographical disruption.” She was further estranged by the patriarchal structure of Orthodoxy, and by her father’s decision to disown and disinherit her when she chose to pursue a secular university education at Barnard College.

While the death of her mother constituted the initial “tear” for Davidman, her respondents described other kinds of disruptions, including exposure to secular relatives and media, and growing up in homes that didn’t meet community expectations. Some respondents described feelings of alienation stemming from their parents’ divorce, while others experienced more serious traumas, like physical or emotional abuse. For women, disillusionment often resulted from the lack of opportunities for public achievement in a patriarchal system.

Throughout the book Davidman argues that the process of defection is above all an “embodied” one — that is, it has less to do with a process of “losing faith” than with an evolution of physical habits. In pursuing this argument she downplays the intellectual aspect of Orthodox defection perhaps too much, although the mental and physical are inevitably entwined. Thus, she writes, “Formerly Orthodox Jews who change their diet, hair, shaving practices, and clothing… perform a sort of identity negotiation… on the bodily canvas.” Just as the practice of Judaism is largely about rules that govern everyday practice, so too defection from Orthodoxy involves the “disinscription” of these physically ingrained habits.

This insight, which will ring true for anyone who has left Orthodoxy, has significant implications. It highlights the way that the experience is different for men and for women, just as the religious practices they leave behind are themselves gendered. And it speaks to the psychological struggle of those who still perform religious rituals without believing in them, and of those who maintain appearances that no longer align with their inner selves.

Indeed, few Orthodox defectors leave all at once. Rather, as Davidman describes in her third chapter, they usually go through a period of “passing,” during which they conform externally in Orthodox environments, while concealing other behaviors and feelings. Like the phrase “coming out,” which many of Davidman’s respondents also used, the word “passing” evokes the experiences of LGBTQ persons, which is no coincidence. During this stage both groups experience feelings of “anxiety and anomie,” Davidman writes, arising from a “significant distance between bodily routine and self-identity.” In many cases, the only solution is to break away entirely.

And yet, as Davidman writes in her final chapters, Orthodoxy is not so easily discarded. “Exiting their communities was not a sudden move; rather, it was the culmination of years… It was also a process of achievement requiring great courage and self-confidence.” Even after an ex-Orthodox person has rebuilt her life in a secular setting, old ties persist. In her case, Davidman notes, a continued fascination with Orthodoxy manifests itself in the writing of this very book, as well as in other parts of her academic work.

Stories of Orthodox defection are plentiful these days, and Davidman’s book is replete with personal accounts of trauma and transformation, including her own. But it also provides a structured way of looking at the ex-Orthodox phenomenon, and will be enlightening to anyone trying to understand it, whatever their religious background. Whether you would encourage people to leave Orthodoxy or prevent them from doing so, the reasons for their defection are no longer so mysterious.

Ezra Glinter is the deputy arts editor of the Forward. Contact him at [email protected], or on Twitter, @EzraG

Why People Leave Orthodoxy — and How