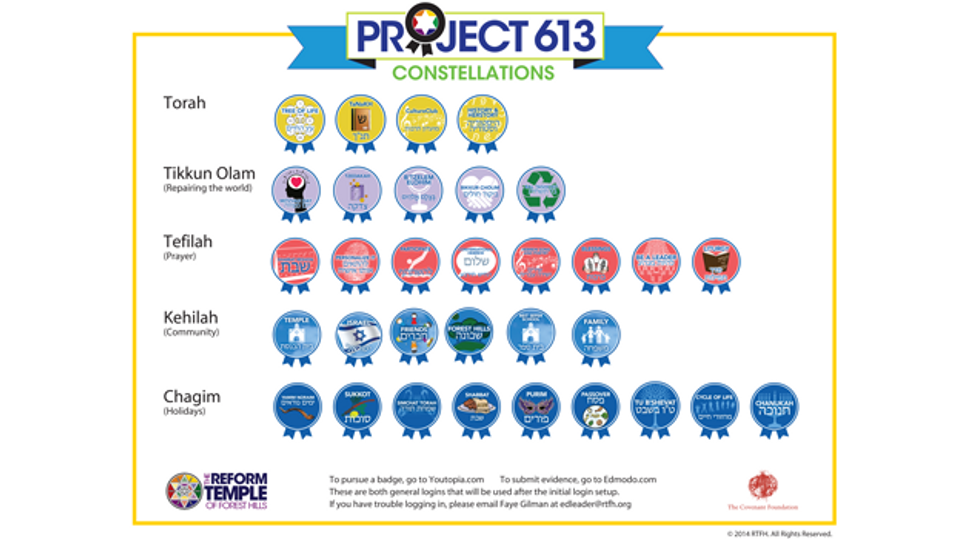 While purveyors of childhood Jewish education as a whole struggle with enrollment and relevance, a small number have become pioneering practitioners of “digital badging,” a new pedagogical model in which learners in a wide variety of learning environments earn digital badges that indicate their accomplishments, skills or knowledge.

With help from associations like the Bill & Melinda Gates Foundation, the MacArthur Foundation and, in the Jewish arena, the Covenant Foundation, digital badges are booming. Open Badges, an open-source standard created by Mozilla, allows badges earned in one venue to be collected in a “digital backpack” and displayed in different places online, such as on one’s Facebook or LinkedIn profile.

“There are now international conferences looking at how to use badging in education, but Jewish education has serendipitously become a real leader in this field,” said Sam Abramovich, a professor of education informatics at Buffalo University. “It’s amazing how Jewish education has managed to grab hold of something that clearly has an enormously transformational pedagogical potential.”

Depending on which side of the generational divide you’re on, digital badges can be thought of as analogous either to merit badges in scouting or achievements in video gaming. “This is a way of gamifying education. It doesn’t turn life or school into a game, but it brings some of the fun and incentives of games into education,” said Barry Joseph, a digital learning educator who has helped kick-start interest in digital badges among Jewish educators. In addition, badges provide a new method of assessment that offers new possibilities. “An assessment is a formative part of a learning process, a way for the learner to get feedback on their progress,” Abramovich said. He is a leading scholar on digital badging and is both a product and former employee of Jewish day schools. “It is a way to determine whether a person has achieved certain goals within the learning process.”

Much of what is learned has traditionally gone unassessed. “So day schools, for example, have lots of different kinds of objectives,” Abramovich said. “There is mastery of the traditional American secular subjects; also, Hebrew, Judaica and all kinds of other learning goals. Like, they might say, ‘tikkun olam’ or ‘compassion.’ But if you get an A in English or a B in a Judaica class, that doesn’t say anything about whether you’ve learned anything about tikkun olam or compassion, right? You can maybe make some kind of assumption, but why not actually provide some kind of assessment for these learning objectives that might go otherwise unassessed?”

That’s exactly what they did at The Epstein School, a Jewish day school in Atlanta. “We named the badges for the qualities we wanted kids to graduate with,” said Myrna Rubel, middle school principal of The Epstein School. “And we went one step further and put a Jewish role model’s name to each of those characteristics.”

Epstein students can earn, for example, the Sergey Brin badge in technological literacy, the Ruth Messinger badge in collaboration or the Golda Meir badge in leadership. “And that way, the kids… learn about Jewish role models along the way,” she said.

Some of the teachers at Epstein have earned badges as well. Through Tamritz, a program that offers Jewish schools ways for both students and teachers to earn digital badges, teachers can take an online course over the summer.

For Tamritz creator Sarah Blattner, digital badges are more than just emblems. “All these teachers were reinventing the wheel, so this is also about getting them to share and collaborate and learn 21st-century learning techniques; and that’s one way of doing it: digital badges,” she said. “From working as a Jewish educator in many cities around the country, my observation was that many Jewish day schools were behind on the latest pedagogical methods.”

Liz Ebersole, a language arts and social studies teacher and educational technology coordinator at Seattle Hebrew Academy, found the course eye-opening, especially the badge in PLNs (professional and personal learning networks). It taught her to use online tools including, “how to use social networking — for example, Twitter, which I had dismissed,” Ebersole said. “I had no idea that people were using it to become connected in a professional way, and that was one of my big takeaways: You don’t have to be so isolated as an educator.”

Tamritz also offers an online course called Digital Age Learning; schools can offer the course to their students. At Seattle Hebrew, where all middle school students have laptops, every sixth-grade student takes the course. “What I can count on with the Tamritz course is that the kids know a lot about online safety, different applications, how to create their own learning networks and that kind of thing,” Ebersole said, calling it a course in “digital citizenship.” “To fully use their laptops, they have to complete the Tamritz course.”

Several day schools now use digital badges, but The Reform Temple of Forest Hills, in Queens, became the first supplementary Jewish education program to do so when it kicked off Project 613, its new digital badging program, at the beginning of this school year.

Forest Hills students aren’t required to participate, but many have chosen to do so. Students go online and look at a list of missions, each worth a certain number of points, with 20 points in total required to earn each badge. Max Silver, 10, and his younger brother, Ben, 7, both earned badges in “Tikkun Olam” by cleaning up a park with their family. “To get each badge is mostly a lot of missions to do. But this one was a 20-pointer one,” Max said. “You also have to take pictures and show evidence.”

Once the evidence is posted online, a teacher either approves the badge or responds with comments. The badges are visible to other students through the students’ profiles on edmodo.com, an educational resource that includes a social networking component. There is additional in-person public recognition, too. “In tefilah [prayer services] they call your name up and everybody claps for you if you did a mission or got a badge,” Ben said.

Though students are not required to participate in Project 613, many are now motivated to do so. However, students and teachers also discuss the underlying purpose. “You can choose, but the teachers really want to get you into Project 613 to bring out your Jewish self so you can help people and do nice things for the world,” Max said. “What makes me want to do it is, I really want to help make the world a better place, and by doing these missions it helps the world and you get to help people and also bring out your culture.”

The Silver boys have also both earned a “Chanukah” badge for building menorahs in Minecraft. Ben’s pursuit of the Culture Club badge brought him into an intergenerational encounter through a mission to learn Mah Jongg. And on a recent family trip to Costa Rica, the boys completed a mission to bring toys to underprivileged children.

Joseph, himself a member of the Forest Hills temple, helped create Project 613 as a way of giving back to his community. “It’s about how can the Hebrew school use a digital badge program to expand the amount of time the youth enrolled in the congregational school spend engaged with Jewish learning,” he said. The badges add an incentive to continue learning in other parts of students’ lives through the completion of the missions, which take place outside school.

Joseph had already been involved in the creation of badging programs at a few day schools, including Epstein. In those settings, he said, the goals are a little different. “The previous digital badging programs I’ve been involved with in Jewish day schools were about: How do you help youth within a formal learning context make connections from what they’re learning in school and the rest of their lives?” Joseph said.

Abramovich sees the work being done with digital badges in the sphere of Jewish education as important in a wider context, paving the way for others. As digital badging spreads, he wonders, “why wouldn’t Catholic schools want to know everything about how we’re doing this and what we’re trying?”

This article was amended to indicate that Myrna Rubel is middle school principal at The Epstein School, not principal.