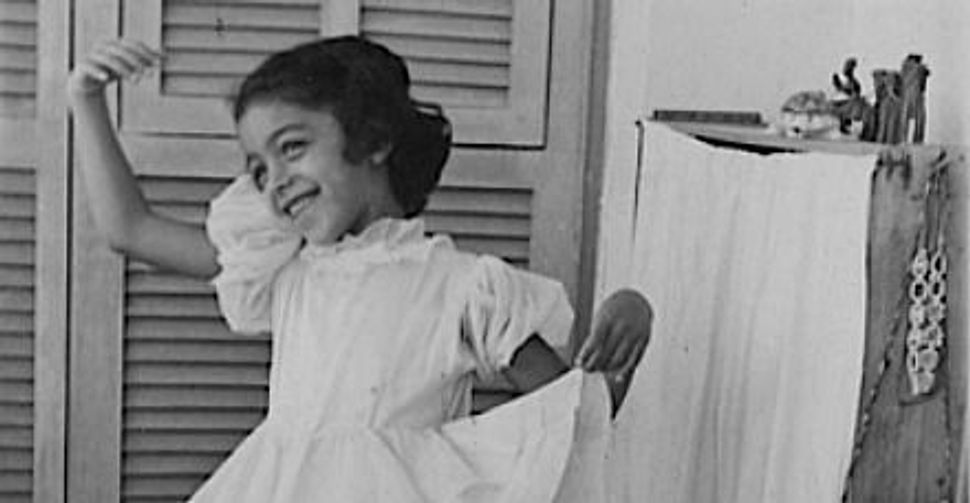 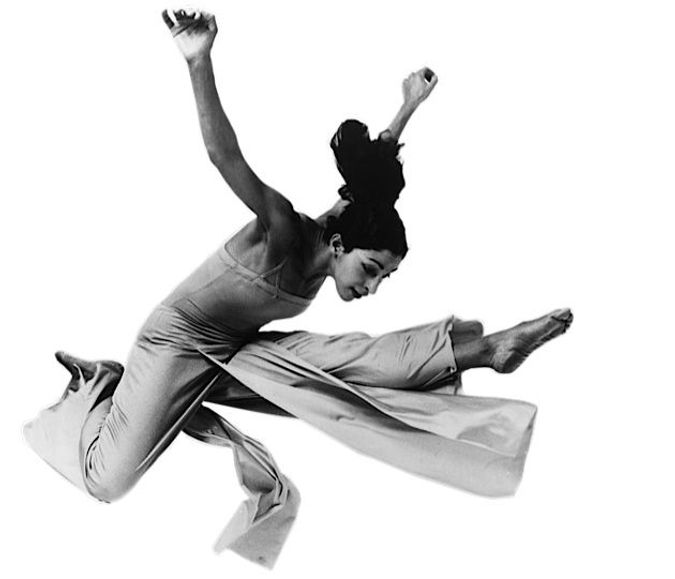 Image by Courtesy of Ze’Eva Cohen

Ze’eva Cohen is tidying up her desk. The modern dancer who enjoyed a blaze of celebrity in the 1960s and ‘70s has reached the age where securing her place in history feels more urgent than satisfying a restless impulse to move.

It’s too soon to say that she will never autograph another playbill, or smile graciously as she accepts a bouquet. The smile is ready. But the chill as sweat cools on the dancer’s skin; the stillness as she removes her makeup in the dressing room; the touring and the late-night dinners — that’s all finished.

Now she putters around the apartment in New York’s Westbeth artists’ colony that she shares with her second husband, painter Avri Ohana. Their pictures share the high walls, her dance photographs beside his florid canvases. The setting is far from sun-baked Tel Aviv. We’re sitting at the kitchen table, with a view of snow-frosted buildings and mist draping the Hudson River. Pale winter light streams in.

Cohen tells me she doesn’t want to burden her daughter with the task of sorting her effects after she dies, but that prospect seems remote. She has just finished a workout and, at 74, she appears casually youthful, gliding as she walks. She’s busy labeling photographs and dating newspaper clippings, making donations to libraries and promoting the theatrical premiere of “Ze’eva Cohen: Creating a Life in Dance,” the new documentary about her.

Directed by Sharon Kaufman, the film will have its first screening on February 3, at New York City’s Lincoln Center for the Performing Arts, as part of the annual Dance on Camera Festival. Kaufman, a former TV editor, says she became captivated by the dancer’s collection of old VHS tapes. “I saw how deteriorated the material was, but I was so struck by her gift, her talent, her creativity,” says Kaufman, adding that her plan to assemble a simple montage of clips to honor Cohen’s retirement from teaching turned into a five-year quest to document her life.

“I was enthralled by what she was talking about, and what I was seeing,” says Kaufman.

As Cohen speaks to me, she becomes engrossed in telling the story of her early life in Israel, and how it happened that she, the child of Yemeni immigrants, became a professional dancer and an academic based at Princeton University.

“I developed from childhood a wonderful sense of observation,” she says, describing how as a young student she would watch her classmates improvise with as much enthusiasm as she put into her own dancing. “I would love to stand and watch, and see who among the girls really ‘got it.’ Because when somebody got an essential image that reflected the music, that would be for me an incredible joy. Later, when I decided to do a one-woman show, the appetite was to become as many people as I could.” 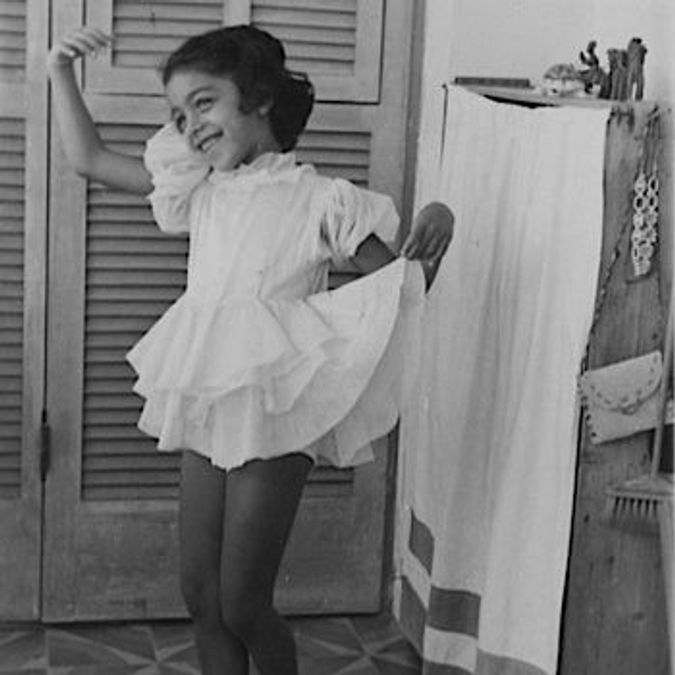 Born To Dance: Ze’eva Cohen as a child in Israel. Image by Courtesy of Ze’Eva Cohen

As a little girl, Cohen grew accustomed to observing the characters around her. Her parents belonged to the Zionist underground, and her father worked for the paramilitary group Irgun. When she was 3, British soldiers arrived at the door, and though her father hid by leaping onto a neighbor’s balcony, he was eventually arrested, leaving her mother to eke out a living as a visiting nurse.

They shared a communal apartment in Tel Aviv, but even in a crowded household and a neighborhood full of children, Cohen says she was a shy youngster who spent solitary hours daydreaming and conversing with herself.

“I pretty much became my own best friend.” To cheer her up, the neighborhood kids would sometimes play a game they called “Ze’eva’s father coming home.”

In this make-believe scenario, the father would emerge from a taxi carrying a suitcase, and there were hugs and kisses all around. In fact, the return of the political prisoners, eight years later, was a traumatic event for Cohen, since by then her father had become a stranger to her. She recalls locking herself in the bathroom, terrified.

Cohen’s first dance teacher was a Viennese woman named Gertrud Kraus, who had hobnobbed with Rudolf Laban and other great figures of German expressionism. She played for her students on a grand piano. “It was not a technical training,” Cohen recalls, “But we created dances all the time.” Kraus had a suitcase filled with costumes, and Cohen remembers how, when she was 14, she selected a flowing, scarlet robe to wear in the “Ritual Fire Dance” from “El Amor Brujo.”

There were also piano lessons, although Cohen had to practice on a neighbor’s instrument. These sessions came to an end when the neighbor’s children, who resented the intruder in their home, brought a live fish from the bathroom and dumped it on the piano keys. The fish was intended for the dinner table. In those days, “everything you bought was live,” Cohen says. “You killed it at home.”

Classes with Rena Gluck, an American disciple of Martha Graham, and jazz lessons from another American named Ruth Harris rounded out Cohen’s early dance education. While the Graham technique imposed discipline on her body and gave her a sense of structure, the jazz dancing enhanced her sensitivity to rhythm. During her stint in the army, Cohen was assigned to the office of military prosecutor Meir Shamgar (who later became president of Israel’s Supreme Court). While the officers took their lunch break, she did exercises clinging to the desk and secretly read their literary stash, devouring Camus’s “The Stranger,” Sartre’s “No Exit,” and poetry by Yehudah Amichai, Natan Zach and Dalia Rabikovich. Then she met Anna Sokolow.

Sokolow, a distinguished American choreographer best known for her raw depiction of urban anxieties in a piece called “Rooms,” had come to Israel to nurture its dance scene. She returned each summer to direct the satellite company she founded, the Lyric Theatre. Cohen became her protégée, and credits Sokolow with her most profound discoveries as a performer. “Her way of moving was connecting directly with life,” Cohen explains. “When she encouraged me not to do things perfectly, but to loosen the edges… for me it was like a bird that was freed. It’s not about being a dancer, it’s about a human being who explains herself in movement.”

Sokolow also bought Cohen a one-way ticket to New York — over her parents’ futile objections that the city was too dangerous. In America, the young dancer studied at Juilliard, and brought her talent for creating vivid characters to the feverish solo “Escape,” in Sokolow’s “Rooms.” Cohen says that Sokolow taught her to banish the vestiges of her childhood timidity. Working in her company also facilitated the development of the young dancer’s instinct for empathy.

After 10 years, Cohen left Sokolow’s company, feeling that she had learned everything she could from her mentor, and joined the founders of Dance Theater Workshop, a laboratory for new work. Her focus would still not be on choreography, however. “I had the performance bug,” she says. So in 1971 she took the unusual step of assembling a program of solo works choreographed by others — a diverse repertory that allowed her to taste many styles. Over the next dozen years she would perform dances by 23 different choreographers. The solo format also gave Cohen the flexibility to marry and start a family.

Cohen’s engagement at Princeton University in 1969 was a by-product of the liberation movements transforming America. The university’s decision to offer dance instruction dovetailed with the all-male bastion opening its gates to women. Dance was considered a “special need” of female undergraduates, along with locks on dorm-room doors. But “it was hippy time,” Cohen recalls, and of the 60 students who signed up to take her first course, 50 were men. “The administration went bananas,” Cohen says. “It was a shock that men wanted to express themselves.”

Cohen founded the ensemble Ze’eva Cohen and Dancers in the 1980s, after the success of a piece called “Rainwood” convinced her she was ready to express herself through other people’s bodies. It proved easier to work on special projects, however, and the troupe folded after five years. Now, in addition to co-producing the documentary “Ze’eva Cohen,” Cohen has put together a DVD containing five of her favorite pieces.

“I never had any plans,” Cohen says,. “Things fall in my path, and I have the richest, fullest life I could imagine. So I’m not going to worry. Walking in the street sometimes I see people smiling at me, and I think, ‘Ah! It’s because I’m smiling.’”