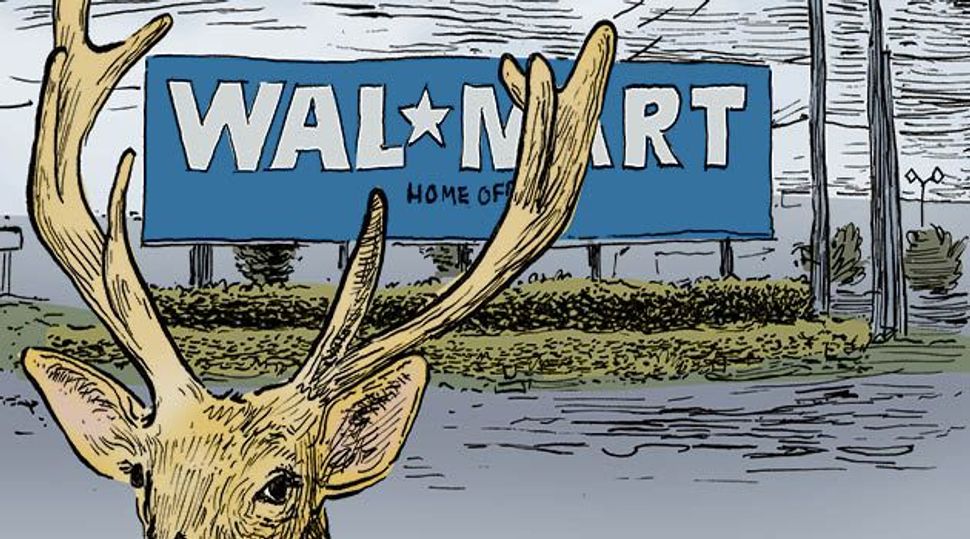 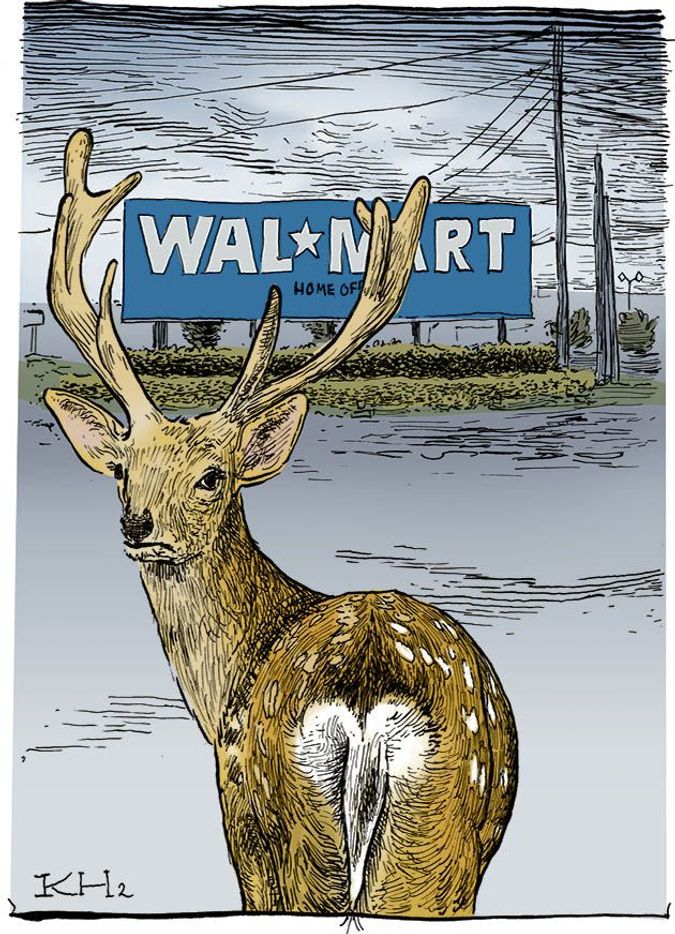 Since 2004, when a handful of families met in a suburban home to discuss the possibility of founding a synagogue, Walmart has attracted both Jewish corporate employees happy to call the town home for a few years and vendors who roll in and out supplying products and services to the mega-retailer. The community now has a non-denominational synagogue, a Chabad house, a Jewish section in a cemetery, a mikveh, and — as of last September — a full-time rabbi.

Rabbi Rob Lennick made quite an entrance when he introduced himself to the Jews of Congregation Etz Chaim by calling up all the other religious groups in Bentonville. Finding them surprisingly open to dialogue, he led the first-ever interfaith Thanksgiving service in northwest Arkansas, which culminated in a pretty unusual Torah reading.

“It was the coolest thing!” Lennick said. “It was more progressive than anything I’ve ever done.”

The comments on the synagogue’s Facebook page that week were as interfaith as the service. “I am proud of our Congregation. It was good for my soul to be a part of so many expressions of love,” one congregant wrote. “That is what TRUE Christians do,” wrote another supporter.

This striking scene of Jewish leadership is a recent development for Bentonville, located in the heart of the Bible Belt. The 10th-largest city in Arkansas is a three-hour drive from the state capital of Little Rock, and boasts a population of just over 40,000.

In 1937, Bentonville had zero Jews. But from the moment Sam Walton opened the first Walmart Discount City Store in 1962, the town’s fortunes were on the rise. In 1990, the population reached 11,257. By 2005, over 29,000 people lived in town — about 100 of them Jews. Most were young families who had come from big cities across the country seeking corporate opportunities. 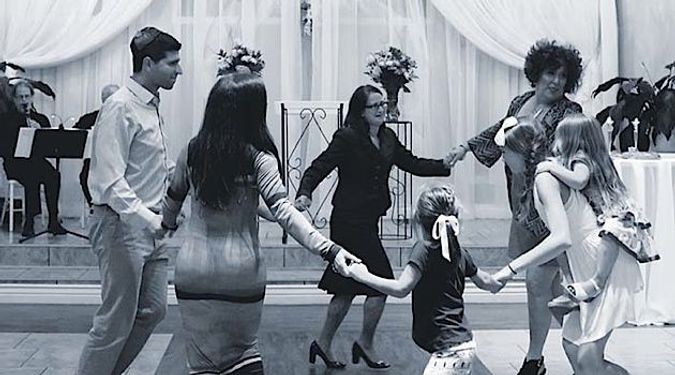 The urban population growth is mirrored in miniature in Congregation Etz Chaim. When the non-denominational synagogue opened its doors in 2004, it had only 12 families. The next year, they bought a small church building to accommodate their services. Now in its 10th year, the congregation counts 35 member families and meets in a building owned by the First Christian Church of Bentonville. About 30 kids attend religious school every Sunday.

Early on, the congregation considered joining up with a denomination. Reform, Conservative, Reconstructionist — all sent representatives to Etz Chaim in the hopes that the synagogue would affiliate. But in the end, they all were turned away.

“Had we affiliated, we might have had more resources available to us, but I definitely think we’ve gained something by not affiliating,” said synagogue president Dawn Bachman, a 20-year resident of northwest Arkansas who works for Walmart. “Our community is so small that if you specifically affiliate with one denomination, you’re going to push someone away. This way, we’re an open door to everyone.”

The result is an eclectic atmosphere that encourages guitar-accompanied Shabbat services and Torah readings on Friday nights (not just the typical Saturday morning), punctuated by spontaneous study sessions.

“I’ve always felt very eclectic myself,” laughed Lennick, whose bio on the synagogue website touts him as “an avid fisherman, mediocre golfer and master tinkerer.” (He also plays the six and 12 string guitars, mandolin, banjo and harmonica.) A self-described Reconservadox Jew, he was raised Conservative, but studied at the Reform-affiliated Hebrew Union College-Jewish Institute of Religion in Los Angeles. After serving as a pulpit rabbi in Connecticut, Florida and Pennsylvania, he worked as a psycho-spiritual counselor and a consultant on interfaith community relations.

In order to serve as Bentonville’s full-time rabbi, he left Pennsylvania, where his wife Heidi Esther Lennick works at an organization dedicated to empowering low-income women. His daughter, Sarah Lennick, is a freshman at Virginia Tech. He goes home every few weeks to visit. “I never thought I would go back to congregational life,” he said. “But I’m here because this is about as nice a place Jewishly as I’ve ever seen.”

Yet the everyday items needed to sustain a traditional Jewish lifestyle are harder to come by. Kosher meat isn’t readily available — those who want it have to drive the two or three hours to Memphis or Kansas City. Most supermarkets offer dry goods and basics like Manischewitz.

That’s partly thanks to Chabad, which Bachman says has helped get products in stores year-round by telling retailers which items Jews are likely to need for each holiday.

Chabad of Northwest Arkansas, helmed by Rabbi Menachem Mendel Greisman, established a presence in nearby Rogers — home of the very first Walmart store (not to mention the Daisy Airgun Museum), and one of the fastest-growing areas in the nation. Greisman translates the geography into New Yorkese: “Rogers and Bentonville are [as close as] Crown Heights and Prospect Heights,” he says.) Unlike Lennick, Greisman caters mostly to the vendors flitting in and out of town. He offers a kosher meal service, a kaddish minyan, and a mikveh. Most recently, Chabad purchased land at the edge of a local cemetery, creating a halakhic Jewish option for burial.

Bachman puts it a little differently: “Some are comfortable going to Chabad, and others just aren’t,” she said. “We offer more diverse services — a lot of interfaith marriages — so our congregational base is very different from Chabad’s. That’s what sets us apart.”

One thing that unites them is the onslaught of friendly questions from non-Jews. Anti-Semitism is not a problem here, for the most part.

“Recently there was a handout of newsletters from the KKK — they were left on car windshields,” Bachman recounted. “But mostly what I’ve experienced is people are curious.”

Questions range from “What is the appropriate greeting for Yom Kippur?” to “What are your thoughts on the New Testament versus the Old Testament?”

“I stick out as an Orthodox Jew,” Greisman said. “I get stopped in Walmart weekly by people who have questions about Judaism, about the prophets. They’ll want to know about a verse in Ezekiel. About my tzizit, my beard. People will come to me when there’s unrest in Israel and say, ‘We’re praying for your people.’”

“The fascination in the Bible Belt with who we are and what we believe is amazing,” said Lennick, who developed a “Taste of Judaism” course to address the locals’ desire for knowledge. “I’m constantly invited to teach church classes. I look at this as an opportunity to break down stereotypes and build alliances.”

Interfaith families, and even non-Jews, often attend services at Etz Chaim. Some come to expand their understanding of the Judeo-Christian tradition, while others are seeking new answers. In the latter category is one family of 10 — with kids ranging in age from 9 to 24 — who came to Lennick as devoted Baptists. After asking a lot of questions, they have become regulars at Etz Chaim and are now pursuing “becoming Jews by choice,” as the rabbi put it.

This renewed interest in Judaism is important for a congregation like Etz Chaim. Walmart Jews come and go. Their presence in Bentonville is transient, forcing the synagogue to be constantly on the lookout for new members.

“We see it as a strength,” Bachman said, referring to the perpetual need for outreach. “New members bring diversity and we like to take advantage of that.”

“Every person is that much more important in the present moment,” Lennick added.

This can-do mentality is endemic to small-town Southern congregations — if they don’t “do Jewish,” no one will.

“What I really like about this is that what [Bentonville Jews] are doing is the story I tell so often — about the 19th century,” said Janet Bordelon, the in-house historian at the Mississippi-based Institute of Southern Jewish Life. “People banded together and formed a synagogue and devoted a lot of time and money to maintaining Jewish life in their town.” That this is happening in Bentonville now, in the 21st century, is “pretty remarkable.”

“Bentonville is an anomaly — but my hope is that it won’t be,” Bordelon said. “I talk to people all the time about congregations that are dying off — and this is one that’s growing.”

Anne Cohen and Sigal Samuel are the deputy digital editors of the Forward.