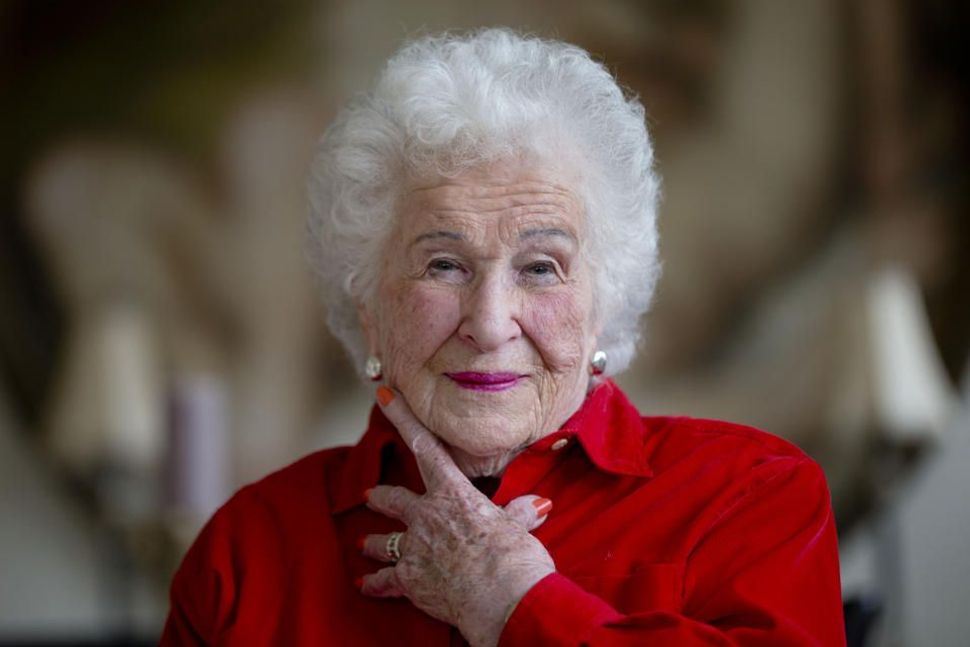 Readers who try to solve a crossword puzzle with the clue “One of the Marxes” (answer: KARL) or “Old Broadway title beau” (answer: ABIE) are enjoying the concise wit of Bernice Biberman Gordon, a constructor of crosswords or cruciverbalist, as puzzle writers like to be called nowadays, who died on January 29 at age 101. In the aforementioned 2012 puzzle, apart from the implicit Yiddishkeit of the Marx Brothers and the 1920s stage comedy “Abie’s Irish Rose,” about a mixed Jewish-Irish marriage, Gordon also included a reference to a sinister Nazi industrialist: “Essen industrial family name” (answer: KRUPP).

Gordon (born January 11, 1914) was raised in Germantown, daughter of a Russian Jew who started as a street vendor of pencils and graduated to an executive position in women’s apparel. As she told the “Philadelphia Inquirer” in 2014,: “I was brought up in the lap of luxury. I never made a bed. I never washed a dish.” This may explain why Gordon enjoyed the leisure to be an avid collector of dictionaries and tireless learner of new words, rather than first generation American Jews who were primarily concerned with finding a job. Even so, Gordon’s mother would complain that if her word-obsessed daughter would buy a cookbook instead of another new dictionary, at least it might benefit the family. Gordon was not the only avidly avocational member of the family; her brother Lucien Biberman (1919–2010) was passionate about fly-fishing, which he did when not pioneering in infrared and electro-optical technology as a researcher in infrared detectors, sensors, missile seekers, and night vision. Biberman eventually helped develop Forward-Looking Infrared and Sidewinder infrared air-to-air missiles. Unlike her brother, Gordon made her avocation into a vocation. Although she had enjoyed wordplay from her earliest years, Gordon became a full-fledged creator of puzzles after her first husband died in the 1940s. As an element of consolation or form of assurance to counter distress, she began to construct crosswords a few years later. She told “The Pennsylvania Gazette” in 2012,: “My life suddenly became very, very empty… When I was by myself one night, I had a thought: I do a crossword puzzle every day. Suppose I try making one. So I tried one and it was easy.”

Having puzzles accepted by major venues was not quite so easy. Yet Gordon benefited from having a transgressive, sometimes racy imagination. In 1965 she startled crossword fans, delighting some and offending others, by offering solutions such as “CARMEN MIR&A” and “SC&INAVIA” with an ampersand replacing the word “and.” Comparable trickery became part of Gordon’s teasing approach to the pleasure of puzzles. Keeping the pleasure principle firmly in mind, in the 1970s Gordon accepted a commission to create an X-rated puzzle for Xaviera Hollander (born of Dutch Jewish ancestry in 1943), author of the bestselling memoir “The Happy Hooker: My Own Story”.

Although Hollander reportedly provided her own X-rated vocabulary for Gordon’s puzzle, the constructor was fully capable of a mildly suggestive jape on her own. In 2013 she emailed a New York puzzle editor to announce the news that she was “having a love affair with a 16-year-old boy.” The object of the then-99 year old Gordon’s affections was the puzzle prodigy David Steinberg, who became crossword editor for “The Orange County Register” at age fifteen. Steinberg had contacted Gordon and proposed they collaborate on a puzzle, and the result was duly published in the New York Times.

Despite such suggestive jests, Gordon always underlined that she was from an earlier, more innocent era. As she informed Steinberg in an online interview,, if she employed the answer “BOOB,” her reference was to the buffoonish comic strip character Boob McNutt drawn by the American Jewish cartoonist Rube Goldberg from 1915 to 1934, and “not part of the body.”

Still, she remained up-to-date and relevant in a quintessentially ephemeral medium. Evidence of her inspiration was published in the “Simon & Schuster Mega Crossword Puzzle Book” series in puzzles co-constructed with a friend, Norman Wizer (1928-2013), and as a centenarian, her puzzles were published in “The New York Times” and elsewhere. Gordon modestly ascribed such achievements to “chronic insomnia” which allowed her to labor nightly with dictionaries. Ultimately, her enduring nimbleness of mind may be best appreciated as a distraction, if not a guide, for the perplexed, a way of counteracting the emotional shocks of life in a ludic spirit.