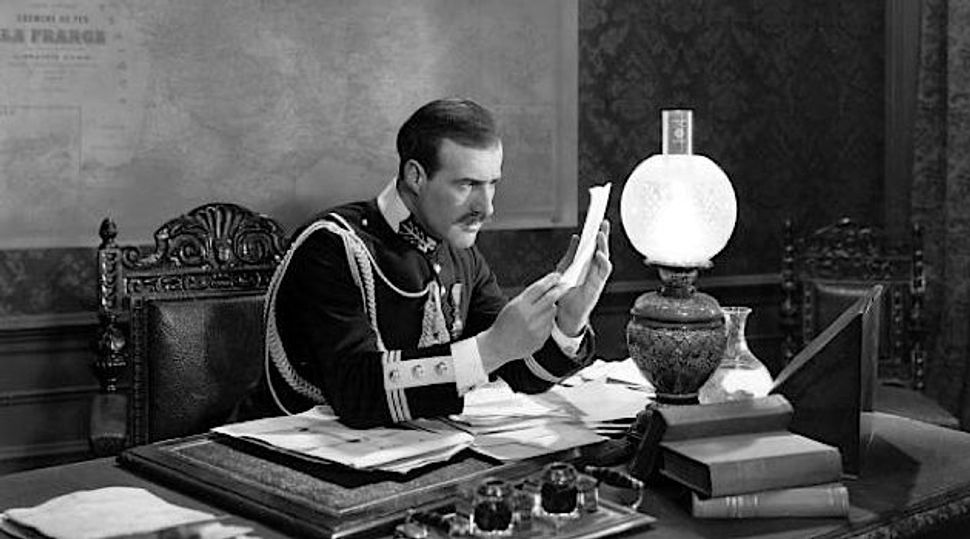 Je N’Accuse Plus: A scene from the 1931 film ‘Dreyfus’ shows the discovery of the letter which finally proved the innocence of Alfred Dreyfus. Image by Getty images

Hardly a day goes by without France figuring prominently in the news. So widespread and insistent is this coverage that it calls to mind an earlier occasion in which goings-on in Paris seized hold of the American imagination. I refer, of course, to l’affaire Dreyfus.

The press obliged, filling column after column with lengthy dispatches about what happened and why. Between 1894, when the story first broke, and 1906, when things seemed to have finally quieted down, journalists filed thousands upon thousands of stories — and in a wide array of publications, from the American Law Review and the Chautauquan to the Eclectic Magazine of Foreign Literature.

Taking American readers behind the scenes, these accounts familiarized them with the complex workings of the French judicial system, introduced them to French military terms, and sympathetically took the measure of Alfred Dreyfus’s plight, which they likened to that of a latter-day Job. Some even speculated as to whether America might fall prey to a Dreyfus case all its own. “We do not know to what extent our Government follows the European system of international espionage,” noted the Independent in 1906. “We hope that we keep out of the dirty business as far as possible for its demoralizing influence is plainly shown in the Dreyfus case.”

Later still, American newspapers kept the Dreyfus affair evergreen, revisiting its re-appearance in the form of plays, films and musical productions, as well as in lengthy feature articles about the man himself. “Dreyfus Lives On, A Forgotten Figure,” a two page spread in the New York Times of August 1, 1926, was just one of many latter-day articles that focused on the aftermath of the affair.

Once the “most widely known Frenchman in the world,” Dreyfus has “lapsed into almost complete obscurity,” observed Martha Gruening, a friend of a friend of Dreyfus, who popped in, unannounced, on the Dreyfus family residence in the Parc Monceau neighborhood of Paris and then proceeded to share her impressions of him with an American audience. Although initially surprised to find the French Army captain “remote, inaccessible,” she changed her mind in the course of her visit. “To see him and speak with him, even briefly, was to understand why this man, once so conspicuous a figure, asks nothing but to be left alone.” By the time Gruening, and her readers, took their leave, they came to see Dreyfus as a consummate example of an “officer and a gentleman.” More importantly still, thanks to the details of this impromptu encounter, a symbol became a person.

In bringing to bear the Dreyfus affair on last month’s madness, by no means am I suggesting that the two are comparable: There’s too much water under the bridge, too much history, to warrant such comparisons. Even so, I think it’s well worth noting how an earlier generation of commentators understood the forces then “disrupting France,” as G.W. Steevens, an unusually discerning eyewitness, wrote in 1898. His smartly observed, incisive and prescient account makes for disquieting reading.

The French “don’t give a sou” about Dreyfus’s innocence or guilt, the complicity of the state or, for that matter, the true identity of the guilty parties, Steevens roundly declared. What really troubled them was the place of the Jews within French society. It was that issue, the age-old “Jewish question,” that seeded and sustained the conflict between Dreyfus’s supporters and his detractors. Pitting one camp against another, the “Dreyfus question has come to be more like an early Christian creed war than anything else,” Steevens wrote perceptively. “The hatred of Dreyfusard for anti-Dreyfusard and contrariwise is quite religious in its fervor — the same fury of vituperation, the same persecution, the same severing of friendships and ties of kinship. The one formula, ‘I believe in Dreyfus,’ is enough to save or damn.”

And that was just the half of it. The depth of anti-Jewish animus shook Steevens to his core. Drawing on what was then a common euphemism for the Jews, he allowed how “no Western naturally likes an Oriental; there is always an undefined barrier of mutual repugnance between them; but that kind of strangeness is nothing like the gnashing fury of your true Parisian anti-Jew.” The reporter, emphasizing the degree to which the Jews were regarded as outsiders, went on to observe somewhat quizzically that, in the course of the Dreyfus affair, a number of popular anti-Semitic periodicals had taken to spelling “Jewish names in a kind of Arabic — ‘Yousouf’ for ‘Joseph’— though why, seeing that a Jew is hardly more an Arab than a Gaul, Heaven knows.”

For his part, Steevens couldn’t put his finger on what prompted such “perpetual hammering.” All he knew was that if such matters were to continue, “Paris’s choice would be between barricades and Bedlam.”

Writing about the same time, Felix Adler, the head of the New York Society for Ethical Culture, also bemoaned the extent to which “racial prejudice” had taken root in France. Its eruption in that part of the world baffled him. Given their respective histories, it was one thing to expect ill treatment from Germany and Russia, but in France, he noted poignantly, “the Jews had expected better things.”