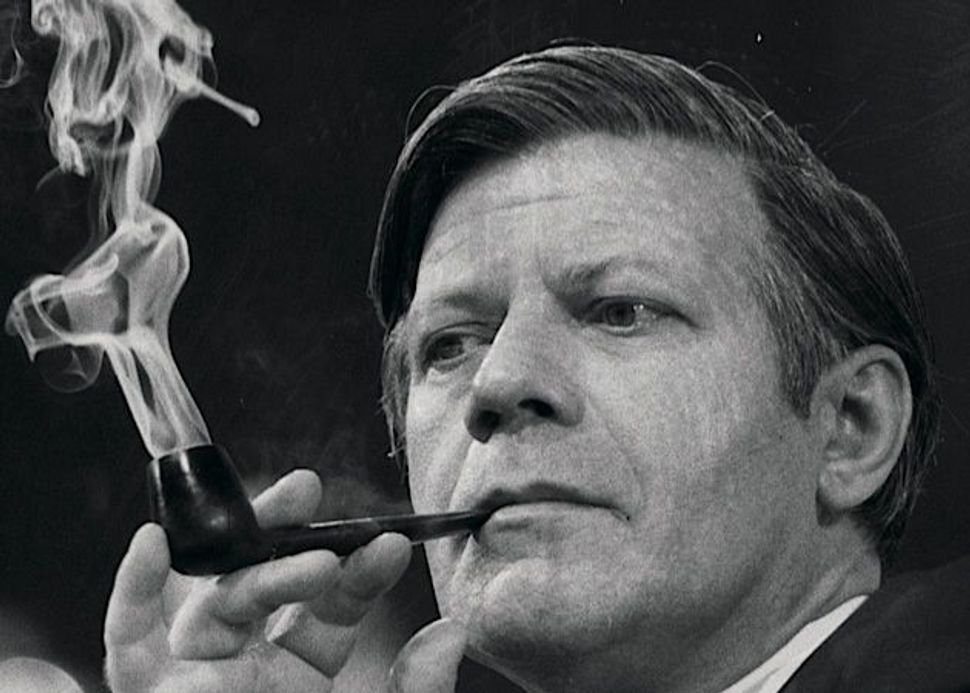 Put That in Your Pipe and Smoke It: Helmut Schmidt’s father was the illegitimate son of a German-Jewish businessman. Image by Getty images

Born in 1918, Helmut Schmidt, who served as chancellor of West Germany from 1974 to 1982, has been enjoying cultural prestige in his old age, in part for having recorded works by Bach and Mozart as a pianist.. Germany’s first national leader to perform so conspicuously as a musician since Frederick the Great, he has relished longstanding friendships with other power brokers. Among them is Henry Kissinger, who in a 2008 German-language documentary declared: “I hope I die before Helmut. I would not want to live in a world without him.” So it came as something of a shock when a new book appeared, stating that Schmidt’s thinking was once “contaminated by Nazi ideology.”

Weighing hitherto unpublished documentary evidence, the literary and legal historian Sabine Pamperrien points out that despite his postwar protests that he was anti-Nazi, during the war Schmidt was a successful and highly-rated officer in the Wehrmacht (the unified armed forces of Germany) after many years as a leader in the Hitler Youth movement, resulting in controversy that has gripped the European media. One 1942 commendation in the Wehrmacht archives in Freiburg, Germany praises Schmidt for his “irreproachable National Socialist behavior.” In September 1943, a note lauds him for his “perfect Nazi attitude.” And so on.

Schmidt has been silent in the face of this brouhaha, although he is still an active public figure. His previous allusions to his past in interviews and such books as “Men and Powers: A Political Retrospective” were ambiguous. He has admitted that during the first years of Nazi rule, he “came under the influence of the brown rulers.” Yet he also alleged that he was a “Nazi opponent,” claiming that only in 1944 did he become aware “that the Nazis were criminals.” In 2013, he told The New York Times that he only heard of Auschwitz and Dachau after the war was over.

Pamperrien opines that it is “hard to imagine” that as a Wehrmacht officer, Schmidt would have been unaware of Nazi crimes before 1944, and describes consistent pattern of misremembering throughout Schmidt’s career, marked otherwise by remarkable lucidity. Pamperrien alludes to Schmidt’s “tactical relationship to truth.” In all likelihood, “astonishing contradictions” in his public statements are due to the suppression of memories, Pamperrien suggests. “National Socialist indoctrination,” she adds, was “much more comprehensive” than is commonly understood today.

Likewise, Schmidt’s own ancestry was a murky matter. Only in 1984 did the fact that Schmidt’s father was the illegitimate son of a German Jewish businessman come to light. Even then, it was not Schmidt who revealed this family secret but another old friend, former French President Valéry Giscard d’Estaing, leaked the information to journalists; it was then confirmed by Schmidt himself. This may have been in response to a 1981 controversy in which Schmidt criticized Israel during a visit to Saudi Arabia, whereupon then-Prime Minister Menachem Begin noted that Schmidt had “willingly served in the German armies that murdered millions.” How Schmidt’s partial Jewish ancestry may have influenced his rapport with Nazism remains an open question.

The historian Bryan Mark Rigg’s “Hitler’s Jewish Soldiers: The Untold Story of Nazi Racial Laws and Men of Jewish Descent in the German Military” made it clear how Germans with distant Jewish relatives fought for the Nazi cause. Rigg’s book quotes Schmidt as admitting “that without his Jewish grandfather, he could have become a Nazi.” Schmidt offered a blurb for Rigg’s book, which argues that as many as 150,000 German soldiers in World War II may have ranked among these part-Jewish forces. Schmidt enthused that “Rigg’s extensive knowledge and the preliminary conclusions drawn from his research impressed me greatly. I firmly believe that his in-depth treatment of the subject of German soldiers of Jewish descent in the Wehrmacht will lead to new perspectives on this portion of 20th century German military history.”

Whatever perspectives Schmidt hoped that such research would develop, he surely did not intend that his success as a Nazi officer should be brought to light. In an interview with FOCUS Online, the historian Michael Wolffsohn calls the new information “cringe-inducing.” Opining that during the Nazi period, Schmidt was not a murderer nor an “active Nazi,” Wolffsohn concludes that he “must have known and seen far more than he may have sought to convince us and himself.”

Schmidt initially helped Pamperrien to access his military records, but reneged on the permission he had given her to consult his private papers when the direction of her research became clear. Pamperrien’s chief point is that Schmidt’s statements about his war experience have varied over the years, with facts camouflaged behind public affectations, such as his refusal to say or write the name Hitler, instead referring to “Adolf Nazi.” In the 1990s, Schmidt declared: “My parents were not Nazis, I was not a Nazi.”

Still, “Helmut Schmidt and the Crap War” establishes that Schmidt devoted much time and energy to personal advancement within the Wehrmacht. The book’s title refers to the dismissive nickname Schmidt gave to the conflict. As a Hitler Youth troop leader and educator, Schmidt was responsible for the ideological indoctrination of subordinates, teaching them about activist Horst Wessel, “Mein Kampf,” and anti-Semitic laws to be obeyed.

“This man is aiming high,” Pampierren writes. “The war depresses him mainly because he sees himself robbed of victory.” She points to Schmidt’s reaction to “War of Annihilation. Crimes of the Wehrmacht 1941 to 1944,” a mid-1990s traveling exhibition organized by the Hamburg Institute for Social Research, showing that the Wehrmacht was “involved in planning and implementing a war of annihilation against Jews, prisoners of war, and the civilian population.” At the time, Schmidt defended the troops, stating that the claim that Wehrmacht was “wholly a criminal organization” was “nonsense.”

In 2012, the German journalist Malte Herwig asked Schmidt why so many German notables refused to admit the obvious — that they had once belonged to the Nazi party. His reply: “After you’ve decided to lie, it’s very hard to tell the truth.”