‘Gett’ Depicts an Orthodox Universe That Is Beyond Kafkasque 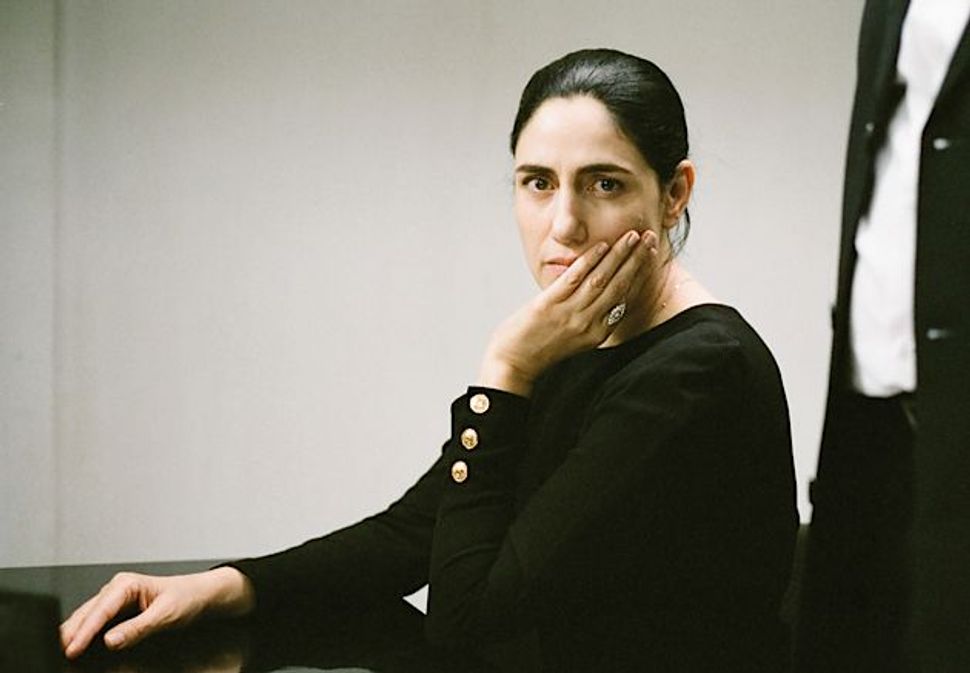 “Gett: The Trial of Viviane Amsalem” is a plea on behalf of agunot, women whose husbands refuse to grant them a religious divorce. It is an indictment of the Israeli justice system, which doesn’t provide for civil marriage or its dissolution, and of the rabbinical courts that do hold such powers. Most of all, the movie is a painstaking study of the ways in which men can use this system to inflict misery on women.

“Gett” is the third movie in a trilogy by Israeli siblings Ronit and Shlomi Elkabetz, following “To Take a Wife” in 2004 and “7 Days” in 2008. In addition to co-writing and co-directing the films, Ronit stars as Viviane, a hairdresser and mother of four who is stuck in an unhappy marriage. In the first movie, we see her at home with her husband, Elisha (Simon Akbarian), fighting over the cooking and the kids, and whether to take a weekend trip to Tiberias. The second movie takes place just after the death of Viviane’s brother, and reveals the simmering tensions within her Moroccan-Israeli family.

Although each of these movies is a masterpiece of its own — the first a claustrophobic study of a dysfunctional marriage, the second a dissection of an extended family’s inner dynamics — together they lead inevitably to “Gett.” As Elkabetz said in a 2014 interview with Time Out Israel, “When a woman gets married, she, in essence, has taken the first steps on the way to a divorce case that she can’t win.” If the perfectly choreographed acrimony of the first two films proved that Viviane and Elisha’s marriage was always doomed, “Gett” shows how hard it is to end.

The movie, which received Israel’s Ophir Award and was nominated as the best foreign language film at the Golden Globes, focuses on the last stage of Vivian and Elisha’s marriage — a period in which the only thing between them is the shared necessity of going to court.

Normally the idea of a courtroom brings to mind images of stateliness and gravitas; this one, however, shows the opposite. As if to underscore the shabbiness of the legal proceedings, the room is small and dirty, with cracked white paint and harsh fluorescent lighting. The men show up in their shirtsleeves, and Viviane — who is usually the only woman present — wears a stark black dress. It seems more like the waiting room for the Department of Motor Vehicles than a court of law.

Throughout the trial, Viviane is accompanied by her lawyer, Carmel (Menashe Noy), while Elisha is represented by his brother Shimon (Sasson Gabai), who is sometimes forced to explain why Elisha isn’t even there. Title cards between scenes announce the passage of time: six months, three months, two months. In all, about five years pass between the beginning of the film and the end, though all we see are scenes in court.

Like “To Take a Wife,” which is set in the couple’s Haifa apartment, or “7 Days,” which takes place within one house, “Gett” is confined almost completely to one room. As if they were conducting some kind of physics experiment, the filmmakers make the space tight in order to keep the pressure high.

Yet within this narrow setting we learn a great deal, especially once the lawyers start calling witnesses. We hear from Viviane’s brother, Meir (Albert Iluz), who appears in support of his sister but winds up praising Elisha’s singing voice and telling Viviane that she should return home. We see Donna (Dalia Beger), a neighbor who seems to be terrorized by her own husband but who has the courage to testify on Viviane’s behalf.

Most entertaining is Viviane’s friend Rachel (Rubi Porat Shoval), who declares that “a divorced woman in Israel eats shit” and whose impassioned, irreverent harangue causes even Viviane to start laughing. In the most uncomfortable part of the trial we listen to the lawyers argue about who refused to have sex with whom — it was both, seemingly, at different times — since that, at least, would be grounds for divorce.

Yet despite all the witnesses and arguments, nobody can figure out what went wrong. We hear many times that Elisha is employed, sober and not given to violence — a model husband, as far as most are concerned. And despite a few hints to the contrary, there’s no evidence that Vivian has done anything to ruin the marriage. All anyone can say is that they’re not compatible, which is the truth.

So why won’t Elisha grant the divorce? This, too, remains a mystery, except as a near-pathological stubbornness. One suspects that Viviane is being held captive by a man who is not only a jerk, but who also may be mentally ill. Finally, in the movie’s most dramatic scene, Viviane bursts out, telling the judges that they don’t even see her. Buried beneath layers of legal process and technicality, Viviane’s plight becomes a minor consideration.

A labyrinthine, interminable, near-hopeless trial naturally brings Kafka to mind, and there is certainly a Kafkaesque element to this situation. Despite repeated hearings, the case goes nowhere. The judges force Viviane to jump through one hoop after another, only to wind up back at the same place. When they threaten to take away Elisha’s driver’s license, it’s revealed that he doesn’t have one, and when they try to suspend his credit cards, we find out that he doesn’t have those, either. At last they throw him in jail for a few months, but the most it does is make him show up.

Yet “Gett” also differs from anything Kafka ever dreamed of. Though Viviane is representative of every agunah, she is also a specific woman from a specific community. Indeed, every character in the movie seems to be related in some way, or at least to have known each other’s parents.

Most of all, unlike Josef K. in “The Trial,” Viviane is threatened not by a faceless system, but by a very personal one. She is struggling not against an indefinite, indefinable accusation, but against a single, stubborn, inflexible rule. Her fate rests not in the hands of some malign force, nor even in the hands of the court, but in the very human hands of her husband. The tragedy is that he has such power to begin with.

‘Gett’ Depicts an Orthodox Universe That Is Beyond Kafkasque