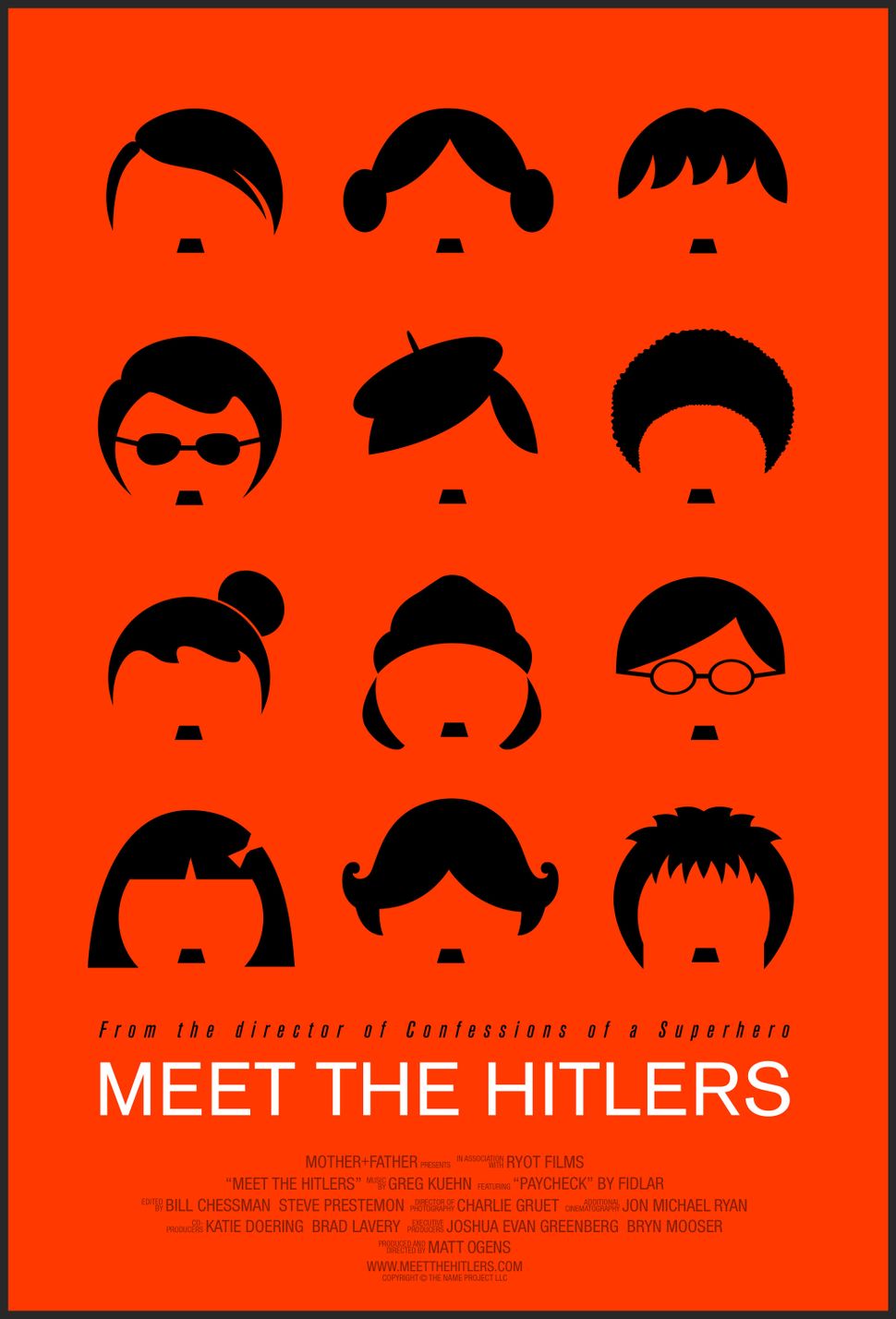 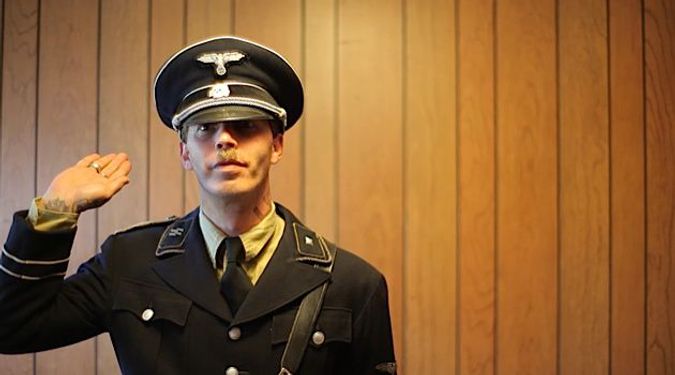 The Name Game: Heath Campbell made headlines for trying to name his child Adolf Hitler. Image by Courtesy of Matt ogens

Incongruous as it may initially sound, “What’s in a name?” Shakespeare’s immortal line from “Romeo and Juliet” lies at the core of Matt Ogens’s endearingly offbeat documentary “Meet the Hitlers.” In the play, Juliet Capulet famously raises the question to declare that the stigma associated with the surname of her lover, Romeo Montague, will not dampen her affection for him. Similarly, Ogens’s film asks whether we should be equally accepting of people who bear the name of the modern world’s arch symbol of evil.

Viewers of “Meet the Hitlers” may be surprised to learn that there are still people on planet earth who bear the name Hitler. The director deserves to be credited not only with discovering their existence, but also for convincing them to appear on camera to discuss their struggles to live normal lives.

At the start of the film, viewers are introduced to a series of seemingly ordinary characters: a genial Salt Lake City pensioner named Gene Douglas Hitler; a spunky St. Louis high school student named Emily Hittler; and a hard-working Ecuadorian immigrant construction worker by the name of Hitler Gutierrez. 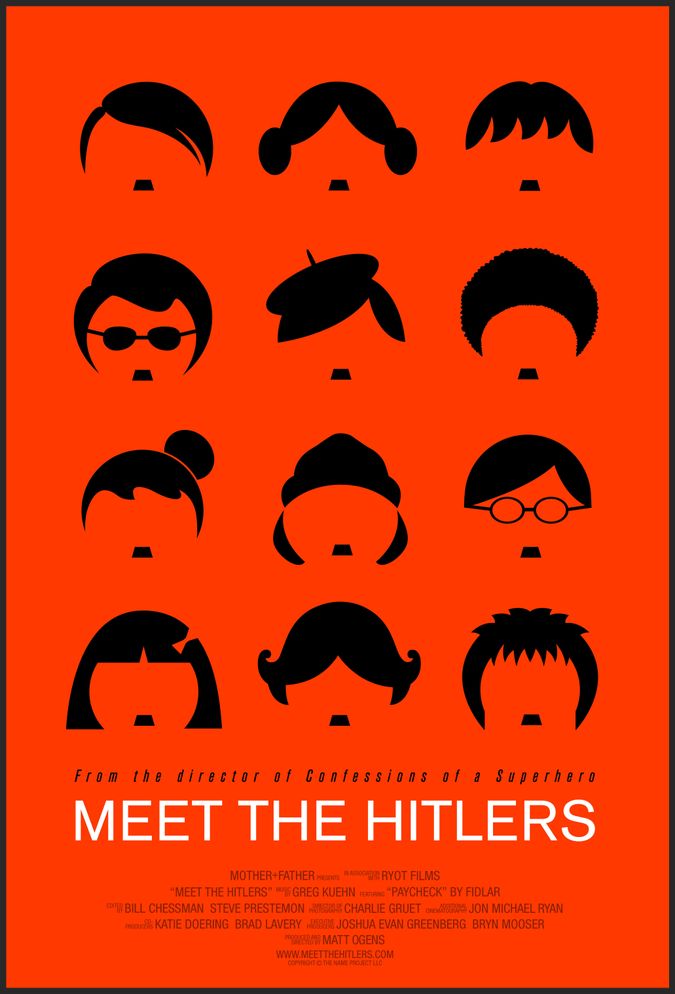 In introducing these characters, the film raises a fundamentally semiotic question: Is there a necessary relationship between the signifier, “Hitler,” and the signified, “evil?” Not surprisingly, the film rejects any such connection.

Most of us have become conditioned to have a visceral reaction to hearing or seeing the word “Hitler.” And yet, the film shows us how three people bearing the name have succeeded in leading ordinary lives. In the process, the film reveals the possibility of attaining normality while being linked to a symbol of exceptionality. The film’s artfully rendered still shots of driver’s licenses, power tools, and gravestones bearing the name Hitler demonstrate how the word can be normalized by situating it in unfamiliar contexts.

Of course, the lives of the three figures in the film are not entirely normal. All describe painful moments when they had to divulge their names: in school roll calls, on job interviews, in Home Depot. Some describe being teased and even beaten up. These experiences lead them to question the relationship of their names to their identities. All of them, however, ultimately reject the classic Latin proverb, “nomen est omen,” and insist that name is not destiny. By leading model lives, they prove that the integrity of character can overcome the handicaps of inheritance.

This point is underscored by the inclusion of other figures who have more fraught relationships with the name Hitler. A New Jersey couple named Heath and Deborah Campbell made national headlines several years ago when they were turned away from a ShopRite bakery after attempting to order a birthday cake for their 3-year-old son, Adolf Hitler Campbell. The father, it turns out, is an ardent white supremacist who decided to honor the Führer by naming his son after him.

Ogens interviews the couple, rejecting an overt stance of directorial moralism in favor of allowing them to discredit themselves with their own on-camera statements. This section of the film makes clear that intentions profoundly matter with respect to naming. Those persons who adopt the name Hitler by choice differ fundamentally from those who have inherited it through no fault of their own.

Most complicated are the cases of people who choose to hide their links to the name. The film features a section devoted to chronicling the attempts of a British journalist, David Gardner, to track down the last of Hitler’s biological relatives who, it turns out, live in the United States. Three brothers, the sons of Adolf’s half-brother, William Patrick Hitler (who moved to the U.S. in the 1930s), are still alive in Long Island. In a reversal of the central plot conceit of Ira Levin’s 1976 potboiler, “The Boys from Brazil” (about the worldwide spread of Hitler clones), the brothers have pledged never to have children, thereby extinguishing Hitler’s genetic line.

Gardner never succeeds in getting the surviving Hitler brothers (all of whom have changed their surnames) to speak with him on camera. Viewers are left to conclude that shame lies behind silence. Perhaps they cannot be blamed for this. Then again, the fact that a German flag is shown flying outside the home of one brother (and the fact that another’s middle name is Adolf) raises other questions that the film never really answers.Yet this film is more than just a diverting story about a handful of exceptionally named people. It is also a meditation on the ways in which the Nazi past continues to evolve in collective memory.

On the one hand, the film exposes the drawbacks of viewing Hitler moralistically. It shows how the well-intentioned desire to preserve the memory of his evil has so stigmatized the name to such a degree that otherwise blameless people who share it have been victimized. For this reason, the film could be seen as submitting a plea for normalization. When a Patchogue Holocaust survivor tells Gardner that he is not bothered by the fact that Hitler’s relatives live nearby (he says that people should not be held responsible for the actions of their relatives), the film seems to endorse forgiving and forgetting.

At the same time, “Meet the Hitlers” makes clear the dangers of historical amnesia. In a particularly touching scene, Hitler Gutierrez calls his father in Ecuador to ask him why he was named “Hitler,” only to learn that the elderly (and clearly uneducated) man merely wanted to give him a name no one else had. In light of the troubles Gutierrez has experienced because of his name, the film highlights the perils of ignorance.

The documentary provokes considerable thought. And yet, viewers may find themselves wondering about a counterfactual question the film never asks: What if Adolf Hitler had had a more common surname? What if it had been, say, “Schmidt”? Would there have been a similar process of stigmatization after the war? In all likelihood, the answer is no — for the simple reason that it would have adversely affected tens of thousands of people with the same name and thus been rejected as entirely impractical. The ethical dilemmas raised by the film, therefore, may be seen as the simple result of chance.

This is especially true given the odd circumstances surrounding how Hitler actually acquired his now-infamous surname. As is well known, Hitler’s father, Alois, was born the illegitimate child of Maria Schicklgruber in 1837 and only took on his adoptive father’s surname Hiedler — which was altered to Hitler — as an adult in the year 1876.

Would Hitler have risen to power had his father kept the family name Schicklgruber? Many observers have speculated that the German people never would have fanatically chanted the cumbersome salutation, “Heil Shicklgruber!” With such a multisyllabic surname, Adolf Schicklgruber might never have gone into politics at all.

“Meet the Hitlers” does not raise these questions explicitly, but in prompting viewers to reflect upon them, the film confirms that there is very much, indeed, in a name.

Gavriel D. Rosenfeld is a professor of history at Fairfield University amd the author of “Hi Hitler! How the Nazi Past is Being Normalized in Contemporary Culture.”