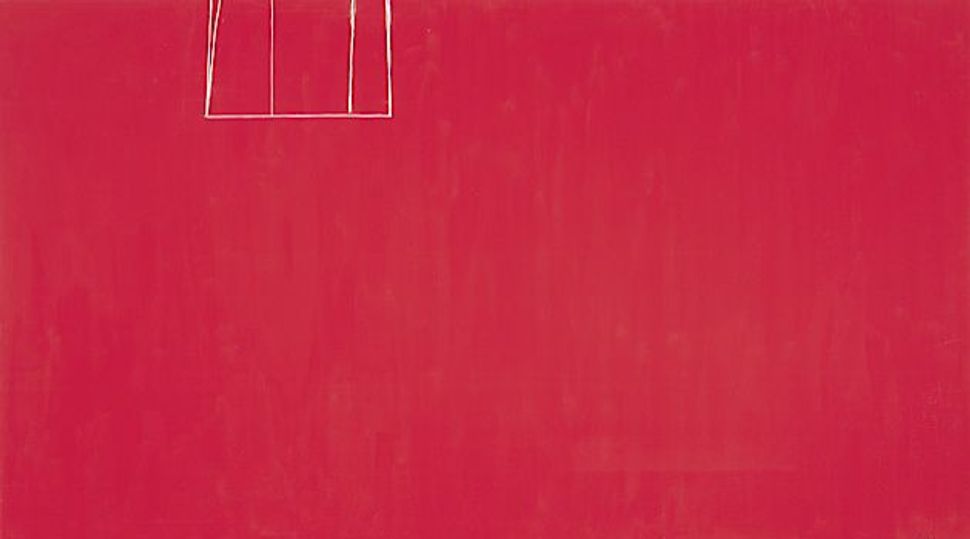 Tucked away in a corner of Chelsea is some of the most important art ever to be shown in New York. Or, at least, it was once upon a time. The show at the Paul Kasmin Gallery may not seem any more significant than the collections on view in Chelsea’s other galleries, but all the artworks currently on display were among the 408 pieces included in the exhibition “New York Painting and Sculpture: 1940-1970” at the Metropolitan Museum of Art which explored modern art, changed the art world forever, and made a celebrity of curator Henry Geldzahler.

The Geldzahlers were New York diamond merchants, having fled their native Belgium just six weeks before the Nazis stormed in. Henry Geldzahler, a devotee to the Manhattanite painters he called the New York School, went on to study at Yale. After Yale, he went to Harvard, and during his studies there, he was offered the position of curator of the Met’s new department of contemporary arts. Though he had previously turned down an offer from the Met during his sophomore year due to the museum’s stuffy reputation, he wound up taking the job and dropping out of college.

At the Met, Geldzahler was able to marry his new position with his intimate knowledge of the new and exciting painters working in New York. Warhol, Rauschenberg, Rothko and Lichtenstein were among the 43 artists who received a major career boost when Geldzehler featured them in the sprawling exhibition “New York Painting and Sculpture: 1940-1970.” “The Courbets and Manets were taken down and the David Smiths and the Kenneth Nolands and Andy Warhols were shown in that space,” recalled featured artist Frank Stella in a 2007 interview with The New York Sun. “It was a shocking experience and a defining moment for modern art.”

From the moment it opened, the exhibition was hailed as revolutionary. The Harvard Crimson’s review said that the show “draws you into the process of discovering the possibilities left to painting and sculpture.” In The New York Times, Hilton Kramer said the show would have major influence “on all the ways in which contemporary art passes into the economic and intellectual matrix of our culture.” The exhibition also had a huge impact on the Met’s role in the dialogue surrounding new American artists. “Sure, the Met had Egyptian mummies and Old Master Paintings. But until Henry’s show in 1969 no one could claim the museum was a destination for contemporary art. Quite frankly, they should have bought every single work in that show!” said Sara Friedlander, vice president of postwar and contemporary art at Christie’s New York, in an email. “It was the most significant exhibition of 20th century art, a breath of fresh air for the Met and, perhaps most importantly, definitively established New York City as center of the art universe.”

Geldzahler continued to be an important figure in the art world long after the exhibition ended. He became New York’s commissioner of cultural affairs in 1977 and worked to expand the diversity of the art world, engaging with many new art movements over the years. He has been portrayed in artworks by many friends; one such piece is David Hockney’s portrait of him with his partner Christopher Scott. Hockney described Geldzahler in the documentary “Who Gets To Call It Art?” as “an extremely cocky, controversial person. We got on instantly.”

On view at Paul Kasmin is a small but vibrant selection of works from Geldzahler’s landmark show at the Met. “The response to the Geldzahler redux was so overwhelming that we didn’t have to beg. We had people wanting to give us works,” said curator Stewart Waltzer in a video interview with Blouin Artinfo. “Had we been wiser, we’d have seconded a second gallery to have a more complete exhibition.”

Although Waltzer also describes the vibrant ’60s palette as “friendly and accessible,” the artworks are not without power, even if it is of a different type than that which they possessed when they invaded the Met. The bright, bold displays of color — especially from Geldzahler’s old friend Warhol — are still brazen and a complete delight to indulge in without the crowds that must have jostled viewers of the original exhibition. Geldzahler believed in the progress of art into new movements and forms: When asked by Barbaralee Diamonstein-Spielvoge what the next big art movement would be, he said, “God knows what it’s going to be but I pray to God I can recognize it when it happens because that’s my role.” This exhibition offers more than nostalgia. It provides an opportunity for viewers to draw artistic inspiration from one of the finest exhibitions ever staged in New York all over again. “Paintings lead to paintings,” Geldzahler once said. “Words never do.”

“The New York School, 1969: Henry Geldzahler at the Metropolitan Museum of Art” runs until March 14th at the Paul Kasmin Gallery, 297 Tenth Avenue.