A Nacht at the Opera in Berlin 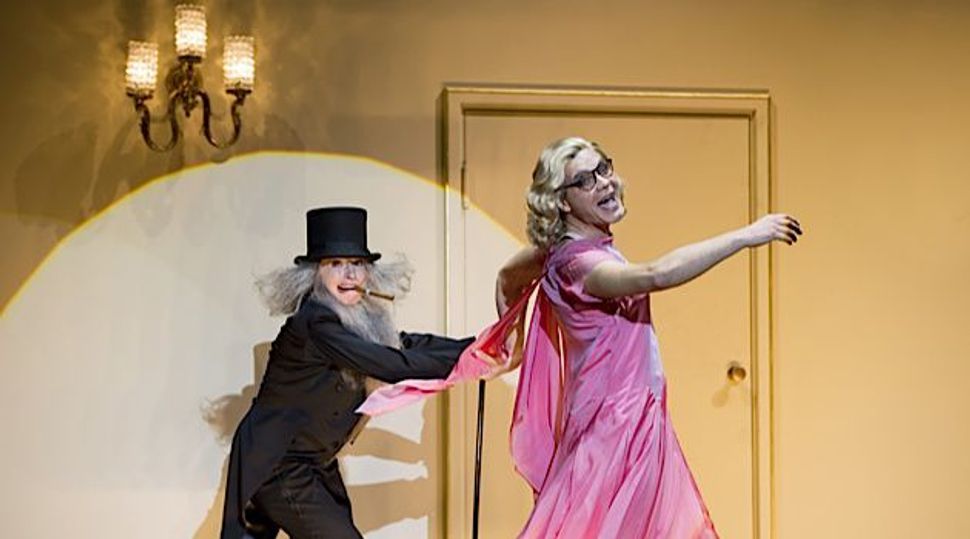 One Woman: Oscar Straus’s ‘Eine Frau’ was the first 2015 premiere of the Komische Oper Berlin. Image by Komische oper

On a freezing January evening, a large crowd gathered to watch as three stolpersteine were hammered into the sidewalk outside the Komische Oper Berlin. These brass stones commemorate victims — mostly, but not all, Jewish — of Nazi persecution. The plaques laid in front of the opera commemorated Jews who were involved there before the war: Fritz Spira was an actor and singer killed in the Ruma concentration camp; the concertmaster Kuba Reichmann went into exile and survived; Hans Walter Schapira, who worked in the library and the box office, was a victim of the Nazis’ euthanasia program T4. Stolpersteine are usually placed by buildings where those who were exiled or murdered used to live. By laying these three stones out in front of opera house, the Komische Oper was drawing attention to the crucial role that Jews played at Europe’s leading operetta theater, the Metropol-Theater, which operated where the Komische now stands.

The stolperstein ceremony took place on the evening of the company’s first premiere of 2015, a little-known operetta called “Eine Frau, die weiss, was sie will” (“A Woman Who Knows What She Wants”) by the Viennese Jewish composer Oscar Straus. The sold-out production was directed by the company’s artistic director Barrie Kosky. Since taking over the house in 2012, the Australian Jewish director has placed an emphasis on forgotten works of Jewish composers who contributed to Berlin’s musical fame — many working at the Metropol-Theater — before the Third Reich.

Kosky’s “Eine Frau” was the first production of that work at the Komische since its premiere in September 1932, with operetta legend Fritzi Massary in the lead role. It was her last appearance at the Metropol-Theater. Several months later, the Nazis took power and Massary found herself an exile, first in Austria and then in America, where she landed in 1939, a year before Oscar Straus arrived in Hollywood. 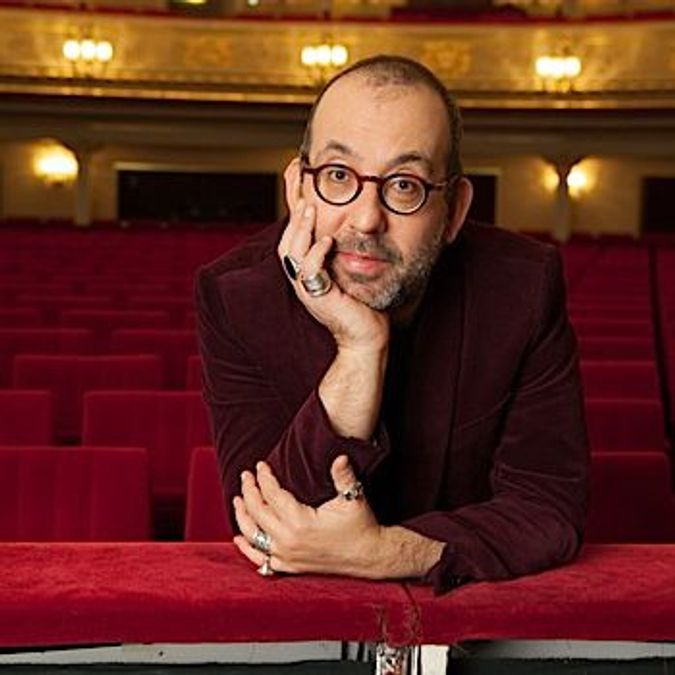 Straus (who chose the peculiar spelling of his name to avoid confusion with the “Waltz King,” Johann Strauss II) was a prolific operetta composer in Europe and turned to writing music for film. He is perhaps best known today for his waltz-saturated score to Max Ophüls’s “La Ronde,” an adaptation of Arthur Schnitzler’s play “Reigen.”

His music for “Eine Frau” is frothy, elegant and melodically rich. The plot that it serves is admittedly primitive — a love triangle between a diva, a dapper count, and a debutante who turns out to be the diva’s daughter — but Alfred Grünwald’s lyrics are breezy and brimming with wit. Perhaps the most unique thing about the piece is how it synthesizes Viennese and Berlin sensibilities. The work’s easy charm and grace is matched by its urbane, frequently ironic sophistication.

Two years ago, when the Komische presented Paul Abraham’s jazz operetta “Ball im Savoy” (which was revived for the operetta festival), it was one of the season’s biggest hits. Abraham, an Austrian Jewish composer, was incredibly popular in Germany before the Nazis banned performances of his work; the 2013 production — also by Kosky — was the first time it had been seen at the house in 80 years. In the program booklet, the conductor Adam Benzwi — who also led the recent performances of “Eine Frau” — wrote about how German postwar recordings of “Ball” minimized Abraham’s jazzy dissonances in order to make it “less Jewish and Black.”

Kosky calls jazz operetta a “Jewish art form” indigenous to Berlin during the period of the Weimar Republic. “It developed over 10 years and mixed qualities of Viennese operetta, American jazz and Broadway,” he explains. It’s exactly the sort of heady mix that Kosky enjoys.

A native of Melbourne, Australia, he has spent much of the past two decades in Europe. Prior to coming to the Komische, he was co-director of the Schauspielhaus Vienna. Additionally, he has produced plays and operas all over Europe, Australia and, most recently, America. His inventive silent film production of “Die Zauberflöte” for the Komische was a sold-out hit last year in both Los Angeles and Minnesota.

Kosky’s first outing at the Komische was György Ligeti’s modern classic “Le Grand Macabre” in 2003. It was a difficult time for the house, with politicians debating the viability of three full-time opera companies in Berlin; Kosky’s production had a lot riding on it. Andreas Homoki, the Komische’s previous artistic director, invited Kosky and other young directors to come on board in a bid to keep the Komische fresh and relevant. Luckily, “Macabre” was a hit and was revived the following season. Successes like Kosky’s convinced the Berlin senate not to shut down the house.

With Berlin’s other two companies — the Berlin Staatsoper and the Deutsche Oper — doing the usual mix of operatic staples over the past two seasons, the Komische is currently the city’s most exciting place to see opera. This is due largely to Kosky’s commitment to presenting forgotten works like “Eine Frau” and “Ball im Savoy” rather than just the regular crop of classics. His programming choices for the house have been eclectic and unpredictable. And for the Wagner bicentennial in 2013, he committed the admirably chutzpadik act of banning the famously anti-Semitic composer from his house. At the time, Kosky told me that all the glut of the Teutonic composer’s work was giving him a headache. “I can’t think of a better antidote to the Wagner year for us to do [Kurt] Weill and Abraham,” he explained.

That being said, when bringing back works like “Eine Frau,” Kosky feels it’s crucial to make the work seem fresh. “I don’t want to be nostalgic about it,” he says. Indeed, no one could accuse Kosky’s recent rediscoveries of being dusty or old-fashioned. Indeed, he constantly seems to be devising strategies to keep things edgy and contemporary. For instance, “Eine Frau” had two high-octane actors performing over 30 roles — with numerous and frequently hilarious costume changes, of course. He also stresses that it would be wrong to try and convince people here to buy tickets out of a sense of guilt or obligation to Jewish artists who were driven into exile or worse. “The best way I can honor these artists is to make sure that people hear these works because they are great works that should be heard,” he explains.

With a growing Jewish population, aided by the never-ending influx of Israelis, Berlin might start to see the reemergence of a secular Jewish culture. Kosky cautions against hoping for a “renaissance.” “I don’t think we’ll ever regain what we had before the war,” he says bluntly.

Bringing back Weimar operetta and the works of these mostly forgotten Jewish composers is a step in that direction, but it’s still only a fraction of what Kosky does in overseeing a full-time opera house whose repertoire spans four centuries, from Claudio Monteverdi to the contemporary Austrian composer Olga Neuwirth.

Kosky seems to plunge himself into each project with equal energy and passion. His next production at the house is Arnold Schoenberg’s dodecaphonic masterpiece “Moses und Aron” (in April), which is about as far as you can get, musically speaking, from jazz operetta. But then again, Kosky relishes such eclecticism. “Maybe because I’m an Australian Jew, I’m used to multitasking artistically. For me there’s no problem putting all these things next to each other. The Germans like to think you need to choose. But I don’t see a problem with having ‘The Simpsons’ in the morning and Tarkovsky in the evening,” he explains, laughing at the two examples he came up with. “Culture is a landscape, not a ladder.”

A Nacht at the Opera in Berlin