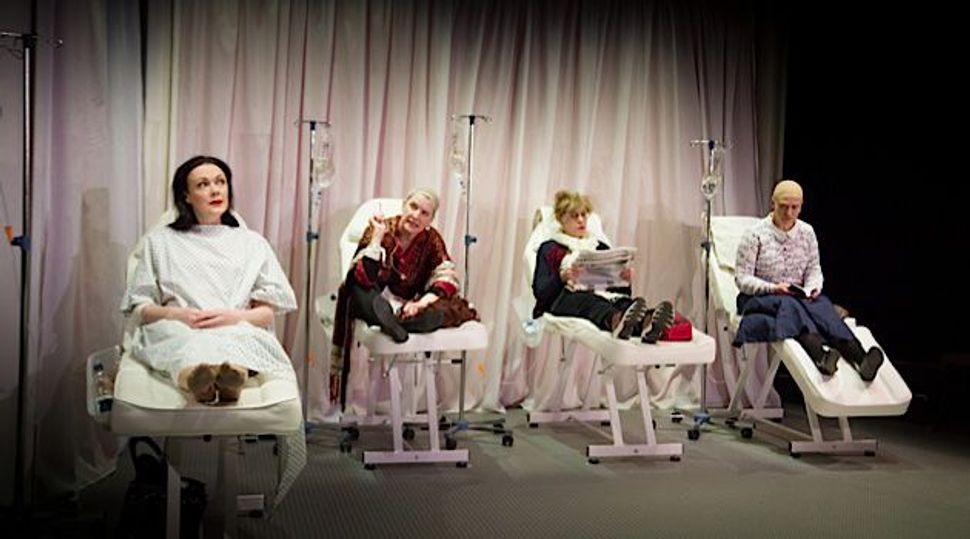 Final Fun: “The only way to write about cancer is using humor,” said playwright Anat Gov. Image by Piers Foley 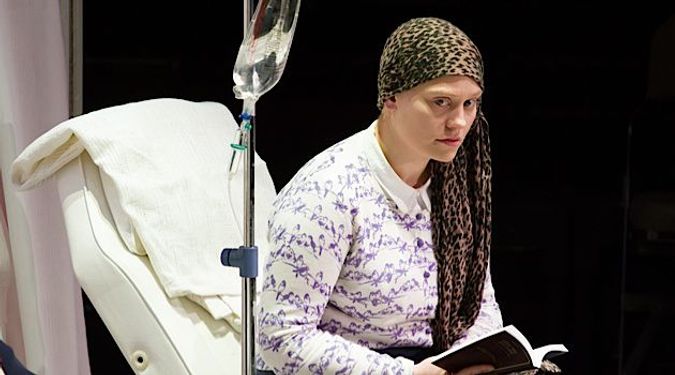 Producer Daniel Krupnik and his wife, translator Hilla Bar, first encountered “Happy Ending”in April 2014, when they saw a photograph in an Israeli newspaper accompanying an article about Anat Gov’s musical play. The picture depicted a woman dancing hand-in-hand with a man dressed as a crab. Not long afterwards, they decided to translate and adapt the work into English.

In its original incarnation at the Cameri Theatre in Tel Aviv in 2011, “Happy Ending” — featuring music by Shlomi Shaban and Michal Solomon — centered on Talia Roth, an actress in her late 40s who visits an oncology clinic in order to undergo chemotherapy. In the ward, she encounters three other women far further along the same course of treatment. Recognizing the gravity and reality of what awaits her, by the second act Roth takes the decision to make her own end and die on her own terms.

“To be or not to be. That is not the question,” Roth says. “The question is how to be.”

As quoted in Ha’aretz in 2012, Gov described “Happy Ending” as “a musical-comical fantasy about a subject that people don’t talk about.” The production’s fantasy elements include musical sequences, which take the form of Roth’s drug-induced dreams. That explains the dancing crabs. “The only way to write about cancer is using humor,” she said.

“I wish mainly to discuss the subject — to say the word ‘cancer’ without being afraid,” Gov told Ha’aretz. “I’m very disturbed by the fact that newspapers, for example, write ‘a serious illness’ and don’t write ‘cancer,’ while for other illnesses that are even more serious they tell it like it is. I hope that people leave this play with less fear of cancer and of death in general. It raises questions about what life is about and whether you are willing to live at any price.”

In a cruel coincidence, “Happy Ending” was Gov’s final work. In December 2012, aged 59, she died of cancer. Her play has since been translated into multiple languages. Now, arriving at the Arcola Theatre — a studio space far removed from the West End in Dalston, east London — it has not only been translated into English but also adapted to an English environment.

In the London production, under the direction of Guy Retallack, Talia Roth has become Carrie Evans, still a theater star in her late 40s. The three women in the ward are British Jews: Miki, who is into nonsense cures and Eastern mysticism; Silvia, a secular Holocaust survivor; and Sarah, a frum mother of six. The ward is in a state-run National Health Service hospital. The story remains the same, but it has been entirely transposed; in a sense, stripped of its Israeliness in order to make it accessible to an English audience.

When I spoke with Krupnik after the show’s opening, he said that he and Bar had made numerous changes, for example removing jokes from the script that played off the specifics of Israeli politics, society and culture. When I put it to Krupnik that, in adapting the work, the show’s Israeliness was being minimized, he rejected the notion that he and Bar were attempting to distance themselves from the show’s Israeli roots. The name Anat Gov remains there beneath the title of the show, he noted, adding that nothing about the story has been changed. Rather, the adaptation to an English setting was undertaken in order to “make it relatable” to London theatergoers. 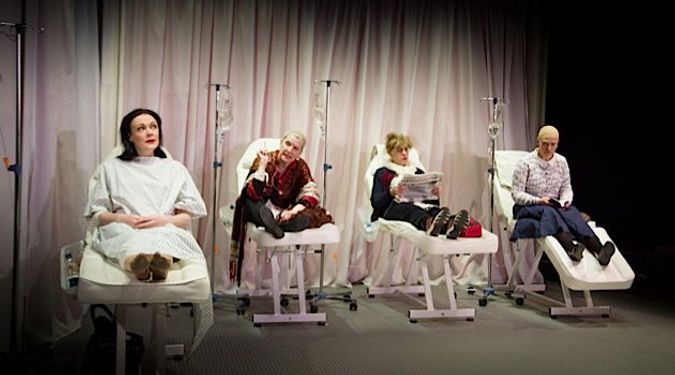 Final Fun: “The only way to write about cancer is using humor,” said playwright Anat Gov. Image by Piers Foley

Is there anything about the show that remains Israeli, then? “I don’t know if it’s an Israeli quality as much as a Jewish quality, but many people who have seen the show have said to me that the humor has a Woody Allen quality to it. It’s a Jewish humor,” Krupnik said. “Happy Ending,” he explained, is in part about “not being afraid to joke about things that are taboo. That kind of gallows humor” — laughing in the face of death — “is part of Jewish humor.”

More importantly, in choosing to keep the show within a Jewish context, Krupnik and Bar have managed to maintain some of the show’s specificity. There is the relationship between cancer and the Holocaust that Gov ruminates on. Silvia, the Holocaust survivor, was born in Auschwitz and makes the observation that, with cancer treatment, there is an option to live, to struggle against death. “Happy Ending” in translation also plays on the religious and spiritual divisions among the three women.

“We had to change very little of that,” Krupnik said with reference to the secular-Orthodox dynamic depicted in the play. “We had countless debates and arguments about what do to, but in the end we decided to keep it as it is.”

It is fair to say that this adaptation has had a mixed critical reception. Writing for the London Evening Standard, Fiona Mountford described the show as “all manner of muddle” and as having been “awkwardly transposed from its original setting.” Mountford found “the attempt to downplay its Jewish inflections misguided,” and of the show’s music added, “Four — yes, four — songs arbitrarily bunged in does not a musical make, especially if they’re the stuff of bad student revue and even include an actor prancing about with crab-claw gloves to personify cancer.”

Audiences, Krupnik assured me, have reacted differently. “I am at the theatre every night and generally, very interestingly, people go up the stairs at the end of the show either laughing or with tears in their eyes. People have been waiting after the show in order to meet the actors and tell them how much they touched them.” It seems to be the case that those seeing the show, including cancer patients, “need some sort of outlet,” which Gov’s play certainly provides.

Liam Hoare is an arts journalist based in the United Kingdom.