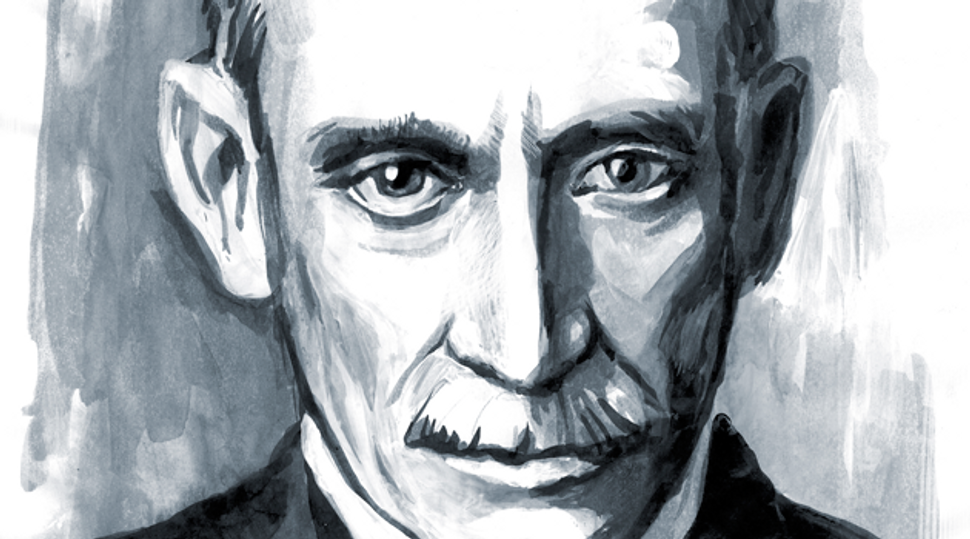 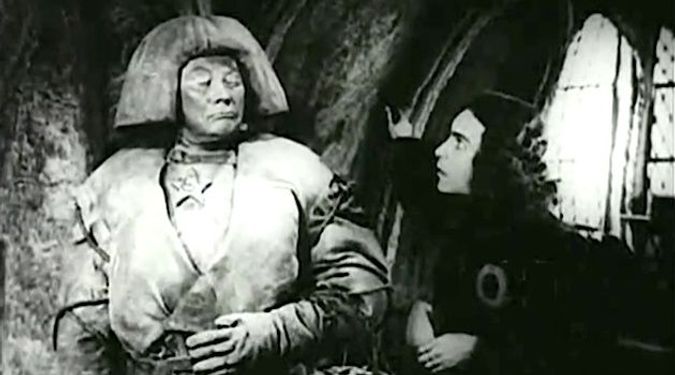 Star Maker: The Golem legend was the inspiration for a trio of films including the 1920 version pictured above. Image by youtube

This year marks the centenary of the book publication of Gustav Meyrink’s serialized novel “Der Golem.” Until a 2006 episode of TV’s “The Simpsons,” where Bart Simpson stole a golem from Krusty the Clown, Meyrink’s was probably the most famous adaptation of the ancient Jewish legend in which a man of clay is brought to life by magic as a “sort of friendly Jewish Frankenstein,” as Germanist Cathy Gelbin stated in “The Golem Returns.” Although most Jewish readers associate the golem story with the 16th-century Rabbi Judah Loew ben Bezalel, known as the Maharal of Prague, the legend that he created the Golem of Prague apparently dates only from the 19th century. So despite its venerable aura, the golem tale was still innovative when Meyrink embraced it. Fans of “The Golem” included Jewish novelists such as Arnold Zweig and Franz Kafka’s friend Max Brod. Meyrink also had his detractors, such as Gershom Scholem.

Born Gustav Meyer in Vienna to Protestant parents, Meyrink led a wild life that included a jail sentence for dubious business practices. He studied esoteric religion, aspired to be a car salesman, and wrote anti-military satires, leading the journalist Karl Kraus to note Meyrink’s “predilection for Buddhism, combined with an aversion to the infantry.” Meyrink called himself a Wüstenhund, or desert dog — and “The Golem” is a shaggy dog story that cites religious lore with wild inaccuracy. The story begins with an unnamed man who falls asleep after reading a book about the Buddha. His dream involves blending his own identity with that of an inhabitant of Prague’s miserable ghetto. The title character does not correspond to Jewish legends about the golem, but hovers in the background, symbolizing the suffering of ghetto dwellers.

Imbued with horror and eroticism that prefigure the work of American fantasy author H. P. Lovecraft, “The Golem” was issued by the German Jewish publisher Kurt Wolff, who also promoted the writings of such Jewish writers as Franz Kafka, Franz Werfel, Else Lasker-Schüler and Karl Kraus.

According to some sources, Max Brod helped edit the manuscript during its serialization before it appeared in book form. It quickly became a bestseller, causing an anti-Semitic backlash during World War I. As the Germanist Amanda Boyd noted in a 2013 article, the critic Albert Zimmermann published an essay in the Deutsches Volkstum magazine stating that Meyrink must be a Jew because he was so interested in Jewish themes. As proof, Zimmermann and others confused Meyrink’s mother, a Protestant actress named Maria Meyer, with Clara Meyer, a Jewish actress then working in Vienna. Zimmermann compared Meyrink’s earlier anti-militarist satires to the German Jewish poet Heinrich Heine’s critical writings leading up to the 1848 March Revolution in Germany. In 1917, another critic, Adolf Bartels, demanded that Meyrink provide clear proof of his ancestry and a portrait photo so that newspaper readers could judge for themselves whether he was Aryan. Still another critic, Carl Gross, agreed that Meyrink must be a Jew because “The Golem” “seeks nothing more than to promote Jewish politics and culture.” The Nazis would later agree with these estimations, banning and burning the works of Meyrink. 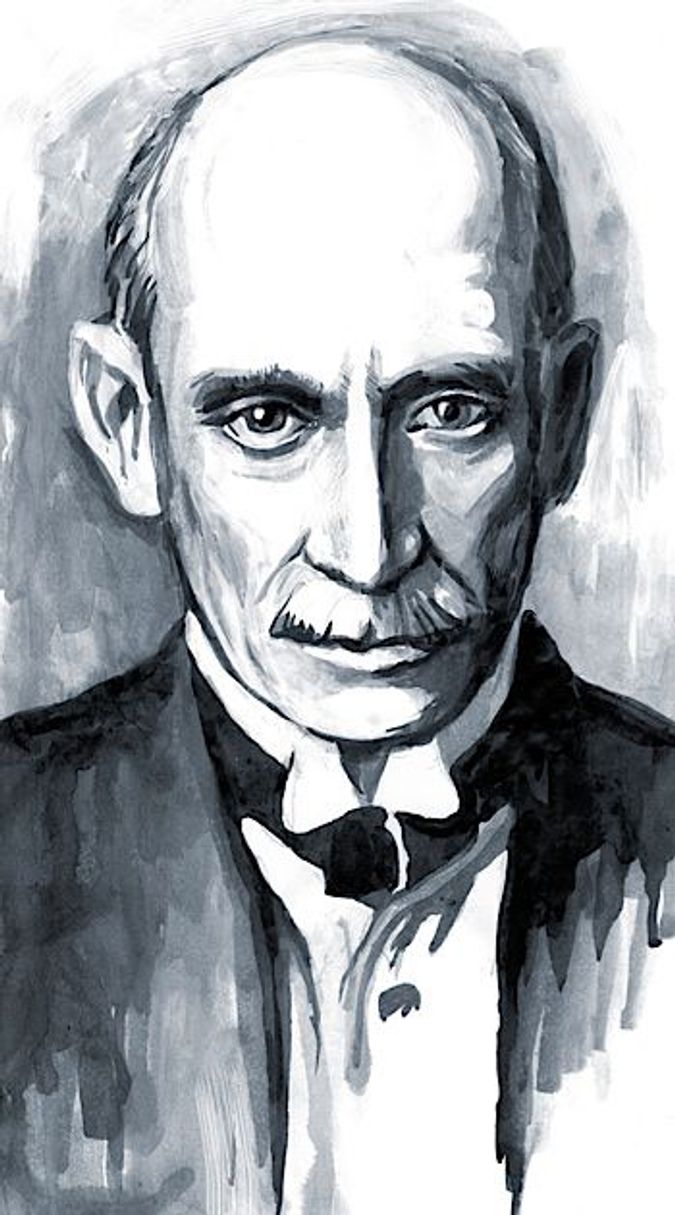 Esoteric: Meyrink had a prediliction for Eastern religions Image by Anya Ulinich

Some Jewish readers enjoyed “The Golem,” both out of sympathy for Meyrink and genuine appreciation of the work. Brod lauded the “pugilistic spirit” of its prose. Kafka, although repeatedly attending Meyrink’s readings in Prague, considered him “too farfetched and much too blatant,” as Sander Gilman noted. And Gershom Scholem, then a brilliant young student of Jewish mysticism, complains in “On the Kabbalah and Its Symbolism”: “By taking up a figure of Kabbalistic legend and transforming it in a very peculiar way, Meyrink tried to draw a kind of symbolic picture of the way to redemption. Such literary adaptations and transformations of the golem legend have been frequent… Meyrink’s work, however, far outdoes the rest. In it everything is fantastic to the point of grotesque… Behind the facade of an exotic and futuristic Prague ghetto, Indian rather than Jewish ideas of redemption are expounded. The alleged Kabbalah that pervades the book suffers from an overdose of Madame Blavatsky’s turbid theosophy.”

Scholem added: “Still, despite all this muddle and confusion, Meyrink’s Golem has an inimitable atmosphere, compounded of unverifiable depth, a rare gift for mystical charlatanism, and an overpowering urge to épater le bourgeois. In Meyrink’s interpretation, the golem is a kind of Wandering Jew.” Scholem’s “From Berlin to Jerusalem: Memories of My Youth” recounts visits to Meyrink in Berlin in 1921. The novelist had heard about Scholem’s erudition: “Meyrink wanted to invite me… to explain certain passages in his own writings to him. Naturally this seemed a bit strange to me. In those days Meyrink was a famous author who combined an extraordinary talent for anti-bourgeois satire… with a no less distinctive talent for mystical sensationalism. The latter quality was reflected primarily in his short stories, some of them very impressive but not quite serious, whose literary quality has been surpassed in our time only by Jorge Luis Borges. At that point Meyrink had also published two widely read mystical novels, ‘The Golem’ and ‘The Green Face,’ both of which I myself had read with a good deal of head-shaking over their pseudo-Kabbalism.” Scholem concluded: “I visited Meyrink on one or two other occasions, and he never failed to astonish me.”

German Jewish author Karl Wolfskehl termed Meyrink a “totally modern phenomenon, a soigné Yogi, a well-mannered hermit, a profound connoisseur of lost knowledge lacking conventional learning, and also a writer who paints with words… It is almost indecent to bluntly ask such a dual-natured person if he is serious.”

Ultimately, posterity may decide that Meyrink’s highest importance rests in his influence on the Nobel Prize-winning author Shmuel Yosef Agnon. As Maya Barzilai pointed out in a 2013 essay,, Agnon’s 1952 novel “To This Day” is set in Germany during World War I, using the creation of the golem as a symbol of the “inseparability of German and Jewish, as well as German and Hebrew, identities and texts.” Agnon saw Meyrink’s novel as a story of creation at a time of great destruction. Even earlier, in 1918, when the German translation appeared of Agnon’s 1912 novella “And the Crooked Shall Be Made Straight,” Brod compared the two authors, declaring that Agnon had surpassed the “outsider” Meyrink: “Meyrink employs Kabbalistic motifs [in ‘The Golem’] as soulless decorative-exotic trappings… In Agnon’s writing, by contrast, any spell or saying from the Zohar is a deep-felt structural element that rises, alive, from the depths of the story.”

Meyrink has earned severe criticism, not least in “The Golem Redux: From Prague to Post-Holocaust Fiction” by Elizabeth Baer, who suspects that he used Jewish themes for mercenary reasons. Yet at least as a precursor to Agnon — and a “Simpsons” plot — Meyrink surely deserves to be remembered.