The Occupations and Preoccupations of Arkadi Zaides 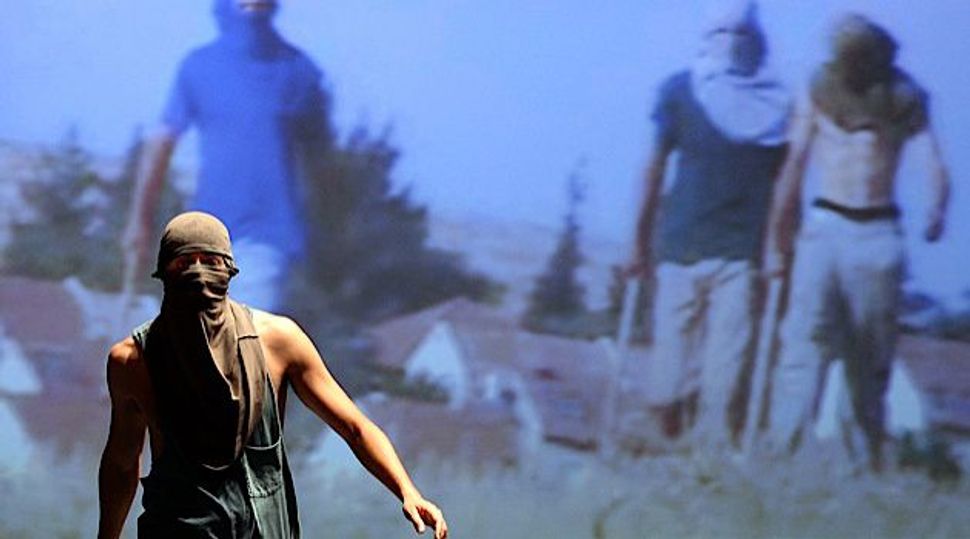 In the video clip, a Jewish boy of no more than 12, seemingly drunk on Purim wine and missing a shoe, kicks and slaps the exterior of a Palestinian home in Hebron. A man in a kippah, perhaps the boy’s father, appears and drags the boy away. The man turns to a soldier off camera who was presumably about to intervene: “You’re not touching him, right?” The boy resists the older man’s grasp. His legs splayed on the ground, he looks up at the Palestinian who is filming him from inside the house and shouts the Hebrew equivalent of “Damn you.” Then the man throws the boy over his shoulder and lumbers away.

Captured in 2007 by a Palestinian cameraman, the video depicts a charged but not altogether unusual moment in Hebron, where some 850 Jewish settlers live among a quarter million Palestinians under heavy Israeli military presence. That clip is now a central component in “Archive,” a dance show by Arkadi Zaides, a 35-year-old Israeli dancer and choreographer who lives in Tel Aviv.

Originally from Belarus, Zaides immigrated to Israel with his family in 1990. As a child, he became involved in folk dance and later joined the Batsheva Dance Company before spinning off into solo work. He’s also an army resister, though he received his dispensation for medical, not political reasons. “My political awareness came after it,” he said.

“Archive” is part solo dance performance, part video installation. In the hour-long production, scenes of settlers in the West Bank uprooting olive trees, throwing rocks, and scaring sheep are projected onto a screen. Meanwhile, Zaides dances, imitating the settlers’ movements. Armed with a remote control, he pauses and replays scenes, sometimes freezing into one settler’s pose such as a defensive crouch, other times gesturing alongside a settler or mimicking him. The show ends with Zaides shifting from one pose to another and recording and replaying the settlers’ shouts on a loop into a condensed cacophony of the occupation.

Since “Archive” debuted last year, Zaides has become a target of right-wing activists who have sought to shut down his work and remove his government funding on the grounds that “Archive” and related projects demean the Israeli Defense Forces and paint a distorted picture of the settlers. Underlying the outrage over Zaides’s work is his use of footage from B’Tselem, the Israeli human rights organization in the occupied Palestinian territories. Criticism of B’Tselem intensified over the summer when the group spoke out against Operation Protective Edge, and Hagai El-Ad, the organization’s new director, refused to call Hamas a terrorist organization in an interview in Israeli radio. “The word ‘B’Tselem’ is like a red rag to a bull today in certain circles in Israel,” said the group’s spokeswoman, Sarit Michaeli.

“Archive” is so named in part because it culls footage from B’Tselem’s vast video archive. Since 2007, the organization has distributed hundreds of cameras to Palestinians in the tensest zones in the West Bank. The idea was to supplement Palestinian testimony with footage of Israeli violations for use as evidence in investigations, but also to break down the Israeli “barrier of disbelief” about Palestinian life on the other side of the Green Line, said Michaeli. To date, the organization has collected thousands of hours of film.

Zaides said he stumbled across B’Tselem’s clip of the boy in Hebron while surfing YouTube. “I was shocked by his physical expression,” he said. “When I was exposed to these actions I was very much intrigued and troubled, especially watching the kid, a very young kid very invested in this violent act.” He contacted B’Tselem, which granted him access to its archive, and he watched several hundred hours of film over the course of a month. Zaides looked for clips with what he called a “very strong movement aspect,” eventually selecting an hour’s worth of material.

One of the most distinctive aspects of “Archive” is that it features only Israeli soldiers and settlers. By nature of the B’Tselem project, the video clips are shot from the Palestinian perspective. Palestinians are present in the background; their voices — sometimes casual, sometimes panicked — are audible behind the camera. But no Palestinian appears onscreen. Zaides singled out settlers and soldiers in order to hold a mirror to the Israeli Jewish public. “I am part of this society,” he said. “I am part of this community. I pay taxes. I hold responsibility for what is going on. I am posing the question of how this ongoing situation of occupation is infiltrating our collective body.”

Another feature in “Archive” is the lack of extreme violence. Zaides decided to focus on the “outskirts of violence”; in one scene, young Israelis with T-shirts wrapped around their faces head toward a Palestinian village to avenge the murder of another settler, Eviatar Borovsky, at the hands of a Palestinian. With Israeli and Palestinian violence saturating the news, Zaides felt that the audience would either quickly condemn or defend the images onscreen. Leaving violence in the background, he reasoned, would invite viewers closer to the act. He noted the footage of young settlers throwing rocks; in a different context, this would be perceived as child’s play.

In another clip from 2010, an Israeli soldier stands at the corner of a building, ready to shoot tear gas into a gathering in Nabi Saleh, the site of a weekly demonstration against the occupation. The soldier lifts the weapon, then places it back down again. Using his remote control, Zaides rewinds and replays the scene multiple times, first imitating the soldier’s actions, then repeating the action from the other side of the screen. When I saw Zaides’s performance in Tel Aviv’s Tmuna Theater in January, I braced myself for the shot to occur, but it never did.

Zaides has been creating work dealing with relations between Jews and Arab citizens of Israel since Israel’s first war with Gaza in 2008. In 2010’s “Quiet,” four Jews and Arab Israelis dance together, sometimes tenderly, sometimes aggressively, exploring the question of “why it is so difficult to communicate with each other,” said Zaides. “Land Research,” from 2012, also includes Jewish and Arab Israeli dancers, considering both groups’ connection to the land.

Zaides’s other work has never been subjected to the kind of outcry that “Archive” has. Over the summer, the Petach Tikva Museum of Art hosted a Zaides installation with B’Tselem footage, called “Capture Practice,” as part of a larger program on dance. A couple of weeks into the show, activists, including a group called Mothers of Soldiers Against B’Tselem, began calling for its closure. Though the activists say that they succeeded in shutting it down, a spokeswoman for the museum said that Zaides’s show continued without interruption until its prescheduled closing.

Zaides’s critics were more successful in Jerusalem, when another “Archive” spin-off was met with about 50 protesters carrying Israeli flags. According to a Ha’aretz report at the time, the demonstration became violent and three protesters were arrested. One audience member said that he was hit in the head with a flagpole, and told to “burn in the gas chambers.” The protesters also shut off the power.

There have also been attempts cut Zaides’s public funding. Zaides said he receives about 140,000 shekels ($36,000) annually from the Ministry of Culture to produce his work. According to a ministry spokesperson, the department’s legal adviser is examining whether or not to bring the question of Zaides’s funding to Israel’s attorney general based on public complaints. Zaides said that he first learned about the proceedings in the Israeli press, but so far there has been no interruption of his financing.

Zaides’s critics have followed him to Europe, where he is now showing “Archive” and “Capture Practice.” “He is doing a lot of demonization all over Europe with his show, showing Israeli soldiers as war criminals,” said Revital Moshiach, the creator of the Mothers of Soldiers Against B’Tselem group, which she has since deleted from Facebook.

Shamai Glick, another activist, said that he reached out to Knesset member Ayelet Shaked of the ultra-right Jewish Home party to alert her to Zaides’s work in France. In January, Shaked wrote to the French ambassador to Israel beseeching him to “show leadership” and cancel the event: “I ask you not to allow the exhibits — which show terrorists as victims and IDF fighters defending Israeli citizens with their bodies as criminals — to take place.”

Both Glick — who is the nephew of Yehuda Glick, the Third Temple activist who was shot and gravely injured by an East Jerusalem Palestinian in the fall — and Moshiach contend that Zaides’s work is stirring up violence against Jews in Europe. “You know what the people in France said?” said Glick. “They said that when people see this show they are coming out and saying that the soldiers of Israel are so bad. They go around and make anti-Semitism.” But Zaides said that just as B’Tselem seeks to keep the Israeli occupation on the public agenda, he hopes that “Archive” will do the same.

“Yesterday I was talking with someone and they said, ‘I think the question is do we control the situation or does the situation control us?’” he said. “I think it’s an interesting discussion.” Israel’s occupation, he continued, is a “self-perpetuating situation where we don’t stop and question the consequences of it.”

The Occupations and Preoccupations of Arkadi Zaides