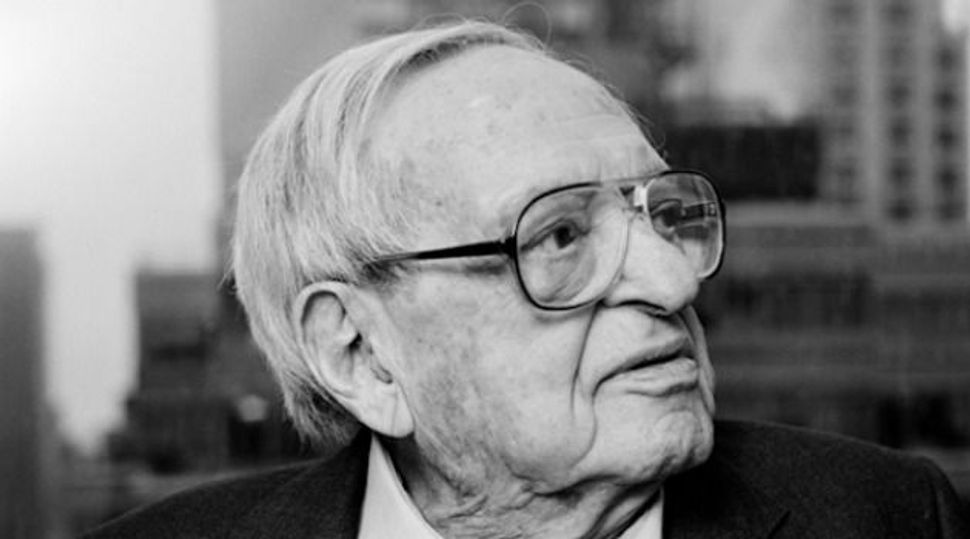 Irving Kahn, the American Jewish money manager who died on Thursday, February 26, at age the age of 109, was more than just the oldest living investment professional, as he was often dubbed. Kahn exemplified a work ethic which stressed ever-fresh intellectual interests as a way to remain young in spirit. Always on the lookout for the next great technical or scientific development, Kahn’s vigilance was stouthearted, even well past his centenary.

Born on the Lower East Side in 1905 to Polish Jewish immigrant parents, Kahn studied at the City College of New York and the Columbia Business School, where he early on acquired dedicated study habits that served him well over a career of unprecedented longevity. (A near-contemporary, the American Jewish financier and art collector Roy Neuberger (1903 –2010) retired from business at the comparatively early age of 99. Kahn became a disciple of Benjamin Graham, who advanced the notion of value investing, or analyzing which securities are underpriced. Graham (1894-1976) was born Benjamin Grossbaum in London to a Jewish family which relocated to New York when he was an infant. Kahn worked as a teaching assistant for Graham at the Columbia Business School and aided him with his landmark “Security Analysis’, originally published in 1934 with several later editions. Following Graham’s approach, Kahn always sought to highlight overlooked stocks with potential. Another student worshiper at the Graham shrine was Warren Buffett, to the point where both Buffett and Kahn named sons after their esteemed professor, Howard Graham Buffett and Thomas Graham Kahn, respectively.

In 1928, Kahn’s first trade on Wall Street in 1928 was to sell short Magma Copper, a popular stock which most analysts thought would continue to rise. Instead, after the Stock Market Crash of 1929, Kahn looked prescient. Rather than posing as a bumptious guru, Kahn would quietly offer some seemingly cryptic maxims for others to ponder, such as “History mostly repeats itself, but it’s never exact.” Or “Wall Street has always been a very poor judge of value.” Describing himself as a “passionate reader,” with a private library of thousands of books on science, technology, and industry but not a single novel, Kahn’s studious ways increased after his wife of 65 years died, when he was around 90.

Researching new investments became his paramount activity more than ever, although he did find time to serve as trustee emeritus of the Jewish Foundation for Education of Women, founded in 1880 by Minnie Louis as one of New York’s first Jewish social welfare organizations. Physical and intellectual stamina were intertwined: during the Northeast blackout of 2003, Kahn, then in his 98th year, imperturbably walked down the 22 flights from his skyscraper office to make his way home.

Although the general interest media took considerable note of Kahn’s longevity, he tended to dismiss it as a subject, referring reporters instead to his siblings, as they were a quartet of centenarians, including his sister, Helen “Happy” (1901-2011) a flamboyant radio broadcaster and Cornell graduate who enjoyed telling reporters, as she did the the “Cornell Sun,” her advice for longevity: “chocolate truffles, hamburgers, Budweiser beer, cigarettes and New York nightlife. Strictly forbidden were vegetables, exercising, getting up early and complaining.”

His sister Helen seems to have convinced the more reticent Kahn to participate in a study at the Institute for Aging Research at the Albert Einstein College of Medicine, by its director, geneticist Nir Barzilai A former chief medic and physician in the Israel Defense Forces, Dr. Barzilai found high amounts of “good” HDL cholesterol in the Kahn siblings, although good cholesterol alone cannot explain the family’s unusual lifespans.

More tellingly than popular media tributes, sustained attention from sobersided investment periodicals proved the lasting esteem for Kahn from colleagues. In November 2013, Nasdaq.com headlined one article: “107-Year Old Irving Kahn Buys BP, BlackBerry, New York Community Bancorp, Sells SLM, Seaboard, …” The article which followed mulled over how and why Kahn bought stock in BlackBerry, among other decisions. His age, although certainly unusual, took second place to the acuity of his thinking, which is surely as Kahn would have wanted it. Long life was simply an occasion for further study, as Kahn told reporter Jesse Green in 2011: “If you’re alive, you might yet find the answer to something…The puzzle you couldn’t solve before. The capacity to enjoy learning is what matters.”