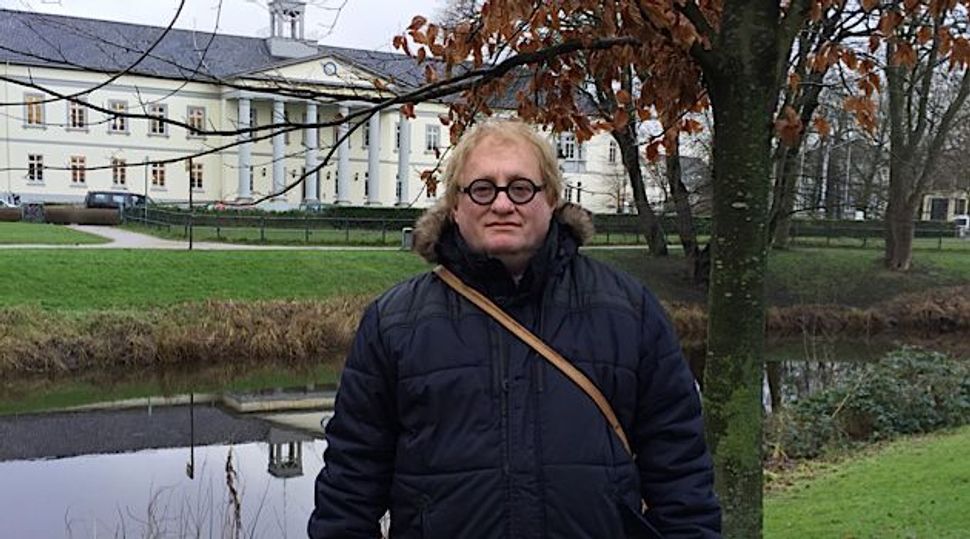 Uri Avnery and Me: In Oldenburg, Tenenbom makes the acquaintance of trees and heroic schoolteachers. Image by Isi Tenenbom

Oldenburg, Germany, is made of people who are historically ahead of their time. “In 1932,” a man tells me as I arrive there, “the people here were the first to vote for a local Nazi government. We did it before Berlin!”

This man, I learn quickly, is not the only one in Oldenburg who remembers the days of World War II. “Don’t we have one Father? Didn’t one God create all of us? Why, then, did a man betray his brother?” reads a monument in the center of town, referring to the Holocaust.

Oldenburg, it seems, deeply regrets its past and is determined to become, as Jews would call it, a light unto nations.

And, indeed, a visit to Oldenburg University suggests that Oldenburg people are always ahead of their time. “The toilets,” I’m told as I enter the gates of the university, “are to be shared by all: female, male and transgender.” No more separate men’s room, ladies’ room, or transgender room. I’ve never heard of other places where transgendered persons have a separate toilet, but whatever the custom is anywhere else, here in Oldenburg University everybody can use any toilet they want. And to make sure nobody is missing this important piece of social progress, signs for the pluralistic toilets are posted all over, each displaying three images: male, female and transgender.

I love this so much that I immediately rush to the toilet, just to be part of this historic moment in the annals of mankind. And what an experience it is! Young people constantly come in and go out, some to relieve themselves in the company of the other sex or gender, others just to watch mixed people relieving themselves together. I’m a bit confused about who is a man or a woman, and who is neither or both, but the sheer fact that all emit a similar odor at the same very moment excites my spiritual self like nothing else ever has.

But when I overstay my welcome at the toilet, people start to get suspicious, and so I walk to the lecture hall to take part in an international conference held by the university’s queer studies department. Almost all participants are female but I spot a few men in the first row and I sit next to them. I have always identified with minorities and I find it intellectually uplifting to identify with these white males, the absolute minority here. I try to connect with two well-dressed men, each wearing a very fashionable suit, but soon discover that both of them have breasts.

The lecturer is a woman dressed in black and she tells us that transgender women are discriminated against by most regimes in the world. She uses PowerPoint and promptly presents a map of the world with all the bad “regimes” splashed in red — practically every country in the world.

She keeps on talking about this and that, and soon we are treated to something like a coffee break.

This is the University of Oldenburg, not a JCC in Brooklyn, and the coffee break table does not offer Oreos or rugelach but organic drinks of all kinds.

What can I tell you, my dear reader? I’m all for shared toilets, transgender and trans-transgender, but I need food. Political correctness is great, but if it’s served only with organic teas, I’m going somewhere else.

I leave the university and walk the streets of Oldenburg in search of eateries. I walk and walk and walk, and before I spot any great eateries I stumble upon what locals here call “the Uri Avnery tree.”

I check the other trees around, wondering if Oldenburg also has a Putin or Obama tree, but no; there’s not even a Merkel tree around here. Only Uri Avnery.

How did Uri Avnery, the famed Israeli leftist, sneak in here? I saw him last year in Tel Aviv and nothing about his appearance even remotely suggested that he would have his own tree, growing proudly in the transgender-loving city of Oldenburg.

I keep walking until I reach a great-looking restaurant and I sit down to order the fat of the land. But before any fat of any land reaches my stomach a lovely, book-carrying Oldenburg lady joins my table and starts sharing her story with me. She had just been declared mentally unfit, she tells me, her voice shaking and her body trembling. I look at her, trying to figure out who this person really is, but her sad eyes pierce into me too deeply and I can’t bear looking at her.

“Tell me your story,” I finally say. In the interests of protecting her reputation, I have chosen not to publish her name here.

She is a schoolteacher, she tells me, and quickly corrects herself: “I was a teacher, but they won’t let me teach anymore.”

Instead of a response, she takes out one of the books she’s carrying with her and asks me to read it. It’s a children’s book, for third and fourth graders, and I wonder: Have I been transformed into a little German girl without even noticing? Why, in God’s and Avnery’s names, am I given a children’s book to read? I want food!

Afraid to look into the lady’s eyes again, I decide that I’m going to abide by her wishes and read the book right here, right now.

The book is a children’s textbook approved by the German educational authorities and published by one of the main schoolbook publishers in Germany. I open it.

Here is a chapter about a kid trying to eat spaghetti while his mama talks to him about his upcoming birthday. Another chapter is about papa, who is “strong and smart and funny.” In between these two chapters there is another chapter, one about powerful people, known as Jews, who for no obvious reason show up one shiny day in a country called Palestine and take over.

In accompanying teaching materials that the lady shows me, teachers are urged to educate the young souls in creative ways. For example: Draw up a map of the Holy Land, spot Bethlehem and Jerusalem on the map, then have the children build a wall between them — a wall that is a jail for all innocent Palestinians, erected by the Jews. This is education! Spaghetti, smart papa and the spoilers of it all: the Jews.

The lady sitting in front of me refused to teach the little kids from such a book. “This is anti-Semitism approved by the State and I don’t want to be a part of it,” she says.

There are other things she says she also doesn’t want to be a part of. For example, an approved booklet for high school students that characterizes Palestinian suicide bombers as heroic freedom fighters.

She carries that booklet too and she tells me that she had refused to teach this material as well.

From the days of Luther, she says to me with tearful eyes, Germans have been anti-Semitic. Her superiors, part of the Oldenburg establishment, are apparently determined to shut her up. They ordered her to go for a psychiatric evaluation, which she says she did, and the psychiatrist hired by them declared her unfit to teach. Her objections to the aforementioned texts, plus her statement about Luther, served as a solid proof for the existence of an acute “structural” damage in her brain, she tells me.

As far as I can tell, this lady does indeed suffer from an acute mental disorder, namely: a severe lack of Jew hating. I don’t know what to say to her, though I wish I could say something. But what could I say? She is paying the ultimate price for not hating me. Are there any words in the dictionary that could express my thanks to her? I hug her tight and I walk out.

1932 is coming here again, only that this time around it is accompanied by many shared toilets and one additional tree.