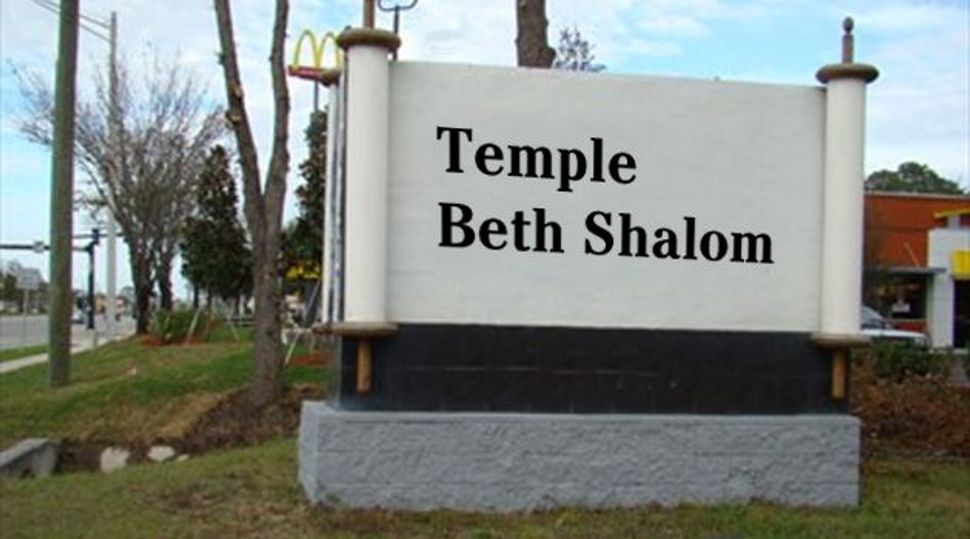 Temple Beth Shalom is one of the most popular bridge playing destinations here in Boca Raton. But although many cruise past the edifice on Glade Road to get a nosh at Izzy’s Deli, few realize that there’s a taste of Yiddish in Temple Beth Shalom’s own bloodlines.

To name only a few connections:

— The site of Temple Beth Shalom was once the site of a chicken farm owned by Bob Marshall, known by his neighbors as “Bob the Jew” for his tendency to drive a hard bargain.
— Former board president Benny Herskovitz, a retired principal, was once described by one of his teachers as “a real Nazi.”
— Mayor Gene Smith, who spoke at Temple Beth Shalom’s dedication ceremony in 1974, has a Jewish daughter-in-law.
— It is a popular tradition for the b’nai mitzvah classes at TBS to sing “Adon Olam” to the tune of “The Hey Song,” properly known as “Rock and Roll (Part Two),” by Gary Glitter. Glitter, a convicted sex offender, has spoken about the great musical influence upon him of the Beatles, whose manager, Brian Epstein, was Jewish.
— If you reverse the first two words in the shul’s name, you get Beth Temple. We checked, and it turns out that Beth Temple, of nearby Boynton Beach, Florida, is in fact Jewish, although it also turns out that she doesn’t like to be phoned after 8 p.m.

Excerpts:
The Gautama first encountered the concept of meditation to attain transcendence while browsing through paperback copies of the vedas in sale bin of Mel Moskowitz’s second-hand bookstore in a back alley of Lumbini…
Though the Gautama himself renounced all worldly possessions, his monastic community did, in fact, maintain a careful budget, overseen by Ronald Blum, CPA.