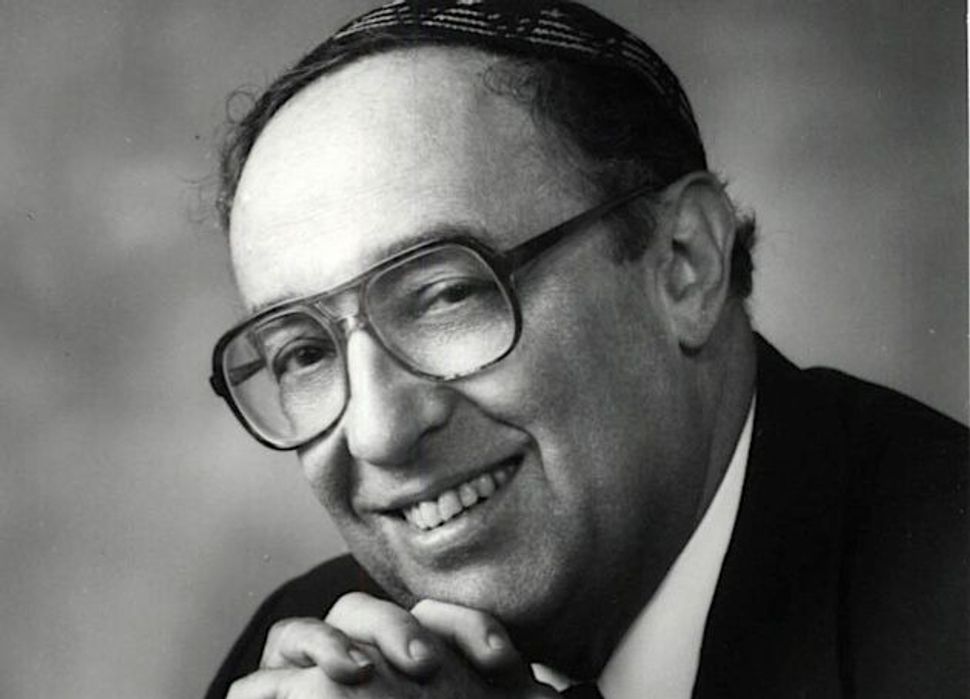 A version of this piece appeared in Yiddish here.

Sociolinguist, Yiddish scholar and advocate for endangered languages Joshua (Shikl) Fishman died March 1 in New York. He leaves behind his wife of more than 60 years Gella Schweid-Fishman, three sons, nine grandchildren and two great-grandchildren. He is predeceased by his sister, the Yiddish poet Rukhl Fishman (1935-1984).

Fishman was born on July 18, 1926 in Philadelphia, Pennsylvania, the son of Jewish immigrants from Ukraine and Bessarabia. His father Aaron Fishman was a staunch Yiddishist who would ask the young Shikl every evening: “What did you do today for Yiddish?” At the age of four he began his Yiddish education in the Workmen’s Circle schools of Philadelphia. He would often accompany his father when he went knocking on the doors of nearby houses in an effort to convince Jewish neighbors to send their children to Yiddish afternoon schools. While a student at Olney High School in Philadelphia he also studied at the city’s Yiddish high school and ran the Peretz Youth Club, which published the first version of the youth-oriented Yiddish-language magazine Yugntruf, which is still published today.

As a teenager Fishman befriended the future linguist and Yiddish scholar Uriel Weinreich and his brother Gabriel, who were then recent arrivals from Vilna. During a visit to the Weinreichs’ home in New York their father Max Weinreich, then director of the YIVO Institute for Jewish Research, invited Fishman to attend a YIVO conference. It would mark the beginning of Fishman’s decades-long association with YIVO and he would remain close to Uriel and Max Weinreich personally and professionally for the rest of their lives.

After earning a bachelor’s degree in history and an master’s degree in psychology from the University of Pennsylvania, Fishman studied Yiddish with Max Weinreich at YIVO. In 1951 he began working as a psychologist for the Jewish Educational Committee of New York. That same year he married his wife Gella (née Schweid). In 1953 he received a doctorate in social psychology from Columbia University, at which point several prominent Yiddishist organizations tried to recruit him to be their education director. Fishman, however, set his sights on wider horizons and would soon blaze his own trail in academia. In 1958 he taught the very first class in sociology of language at the City Universy of New York. The field, which today is so closely associated with Fishman’s work that he is often referred to as its “father,” investigates the influences of language on a society. (The closely related field of Sociolinguistics investigates the influences of a society on its languages.)

That same year Fishman began working as a professor of human relations and psychology at the University of Pennsylvania. From 1960 until 1988 he was professor of psychology and sociology at Yeshiva University, as well dean of the university’s Ferkauf Graduate School of Social Sciences and Humanities. After becoming professor Emeritus in 1988 he regularly taught at Stanford University as a visiting professor of education and linguistics as well as at many other universities throughout the United States, Israel, the Philippines and Holland.

Fishman’s output was famously prodigious: He published more than 100 books and 1,000 articles throughout his long career, among them important collections of groundbreaking research and theoretical monographs which laid the foundation for several subfields of sociolinguistics. His work on endangered and minority languages was especially close to his heart: He formulated a series of step-by-step guides to help speakers of endangered languages conserve and revive their mother tongues. He received the Linguapax prize in 2004 in recognition of his work on behalf of threatened languages and was an honorary member of the Royal Academy of the Basque Language.

Despite his myriad academic activities as a professor, author and the editor of numerous scholarly publications, Fishman always remained active in the field of Yiddish Studies. In 1965 he published a pioneering work on Yiddish in America and in 1981 the massive 800-page collection of scholarly articles in Yiddish and English on Yiddish sociolinguistics, “Never Say Die” appeared under his editorship. He wrote a decades-long column on sociolinguistics for the Yiddish-language journal Afn Shvel and published a large number of articles in the Forverts on minority languages, the sociolinguistic state of Yiddish and bilingualism, and other topics. Fishman, along with his wife Gella, also directed the Aaron and Sonia Fishman Foundation for Yiddish Culture which supports programs that teach Yiddish to young people.